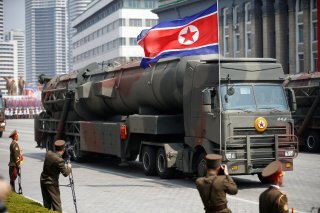 North Korea has tested its first intercontinental ballistic missile (ICBM) since 2017, throwing down the gauntlet to the Biden administration and thrusting the Korean peninsula into yet another escalatory spiral.

The missile flew to an altitude of 6,000 kilometers and covered a distance of 1,080 kilometers before crashing into waters west of Japan some seventy-one minutes after liftoff, according to Japanese officials.

Japan's vice defense minister, Makoto Oniki, told reporters on Thursday that the missile’s altitude suggests it is a "new type of ICBM," potentially more capable than the Hwasong-15 ICBM tested by the DPRK in 2017. U.S. officials have previously warned that North Korea is poised to test-fire its new Hwasong-17 missile, which is considerably larger than its Hwasong-15 predecessor and would be one of the world’s biggest road-mobile ICBMs.

The test was swiftly condemned by Japan, South Korea, and the United States. “It is absolutely unacceptable that while the world is responding to Russia’s aggression against Ukraine, North Korea would unilaterally escalate its provocations against the international community by conducting this launch,” said Japan’s chief cabinet secretary, Hirokazu Matsuno, on Thursday.

South Korean president Moon Jae-in said the test was conducted in violation of a prior ICBM moratorium, adding that the situation is “urgent and serious.” In 2018, Pyongyang announced a self-imposed moratorium on tests of nuclear weapons and certain long-range ballistic missiles following historic summits between North Korean leader Kim Jong-un and former President Donald Trump. North Korea announced in 2019, as peace talks with Seoul began to sputter, that it was no longer bound by that limitation. Thursday’s test marks a clear end to the moratorium.

Kim ordered North Korean officials in January to reconsider previous “trust-building measures” and "promptly examine the issue of restarting all temporarily-suspended activities.” The DPRK conducted as many as seven launches in January, the most ever recorded in a single month, but none of those tests involved ICBMs.

Experts believe that Pyongyang could be seeking to assert its status as a nuclear power at a time when the West’s attention is focused on the war in Ukraine.

"North Korea refuses to be ignored and may be trying to take advantage of global preoccupation with the war in Ukraine to force a fait accompli on its status as a nuclear weapons state," Leif-Eric Easley, associate professor of international studies at Ewha Womans University in Seoul, told CNN.

The Biden administration condemned the test as a “brazen violation” of multiple UN Security Council resolutions. “We urge all countries to hold the DPRK accountable for such violations and call on the DPRK to come to the table for serious negotiations,” said White House press secretary Jen Psaki. “The door has not closed on diplomacy, but Pyongyang must immediately cease its destabilizing actions,” Psaki added.