Another Anniversary, Another Parade: North Korea Showcases Something, but What? 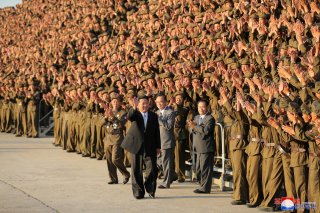 Last Thursday was the 73rd anniversary of the founding of the Democratic People’s Republic of Korea. Most people wouldn’t see that as much to celebrate. The specific anniversary isn’t special. Moreover, the DPRK—impoverished and isolated, a gulag state, and the world’s only Marxist-Leninist monarchy—doesn’t have much to honor.

However, the Kim regime held a night-time parade in Pyongyang to celebrate. It was a low-key affair compared to last October when the DPRK unveiled a large ICBM and more. There were no heavy weapons and Kim did not speak. Still, little is done in North Korea without political purpose, so this event likely was directed at a domestic audience.

Described NKNews: “Instead of emphasizing the country’s military might and nuclear weapons aimed at foreign threats, the smaller-scale military parade appeared to spotlight internal political security and efforts to keep the population safe from threats such as the COVID-19 pandemic.” The security forces received some attention, including the traditional armed forces, most importantly artillery units. Also in attendance, however, were police on horseback and militiamen on foot.

Equally important in this case, it seemed, were more domestic-oriented personnel. NKNews reported: “Formations of ‘emergency anti-epidemic’ fighters and others from the Ministry of Public Health—who the report said ‘keep our fatherland and people’s safety ironclad from global great disaster’—marched in the parade while wearing full orange protective outfits and gas masks. Reservists from farms and factories across the country also marched in formations.” Kim even held a banquet, potential famine be damned, for “labor innovators and merited persons.”

In contrast to other parades, this one appeared to have no external purpose. Even a practiced Kremlinologist who normally followed North Korean political developments would have found little to interpret. The New York Times suggested the purpose was to boost popular morale, quoting Prof. Leif-Eric Easley of Ewha Womans University that “We shouldn’t over​-​interpret foreign policy or negotiating signals from a parade that’s primarily aimed at domestic political audiences.​”

No doubt, with Kim suggesting his nation faces another “arduous march,” North Koreans might appreciate the reassurance. Whether this parade helped is an open question. It certainly reinforced regime ideology. However, given the prevalence of Western and especially South Korean information and culture, traditional DPRK mythology is less effective than before. Indeed, fear that the younger generation, in particular, rejects such claims accounts for increased punishment of those straying from orthodoxy and heightened propaganda efforts.

However, the parade may have had some external significance as well. Perhaps it was intended to help lull Washington asleep.

Pyongyang has both restarted its Yongbyon, plutonium-producing nuclear reactor, and revved up its plutonium-separating laboratory. Declared the International Atomic Energy Agency: “The DPRK’s nuclear activities continue to be a cause for serious concern. Furthermore, the new indications of the operation of the 5MW(e) reactor and the Radiochemical Laboratory are deeply troubling. The continuation of the DPRK’s nuclear program is a clear violation of relevant UN Security Council resolutions and is deeply regrettable.” This gives life to the Rand Corporation/Asan Institute estimate that given current production within a few years North Korea could have a couple of hundred nuclear weapons.

Objectively, that possibility should cause concern, perhaps fear, and even possible panic. The U.S. might respond with even greater U.S. emphasis on negotiation, or, as occurred during the first year of the Trump administration, by reviving “fire and fury” and heightened confrontation. Pyongyang might view a military parade sans missiles as a useful soporific tactic to calm Washington. When the Kim regime stages a parade, U.S. officials normally expect a showing of new weapons and threats. Since this time there was nothing much to see, they might relax and go back to whatever other crisis they were handling.

The recent parade also might have been directed at the People’s Republic of China. North Korea is increasingly relying on the PRC amid self-isolation in response to the coronavirus pandemic. Beijing almost certainly expects Pyongyang to exercise self-restraint and avoid overly provocative steps, most obviously nuclear and ICBM tests. Ostentatiously focusing on domestic issues while surreptitiously expanding and improving its nuclear arsenal might be a policy combination China can live with.

Even if this consequence was not Pyongyang’s intention, it might be the effect. The Biden administration obviously has many issues consuming its attention. It likely would be happy to set North Korea aside for the time being. The PRC, too, would prefer to avoid a crisis involving the Korean peninsula. Beijing hopes to preserve the North as a buffer, foreclose U.S. military threats, and improve ties with South Korea. No one, not even North Korea, wants a serious confrontation at the moment.

Reading North Korean tea leaves always is a difficult, uncertain task. But ultimately the latest parade sends no new messages likely to change administration policy. The administration should consider military action only in defense, show flexibility with sanctions to encourage direct contacts, and pursue negotiation aimed at arms control in the name of denuclearization. That isn’t a perfect solution, but the perfect should not become the enemy of the good. Simply limiting Pyongyang’s nuclear objectives would be a significant success.