How to Stop North Korea From Becoming a Nuclear Weapons Superpower 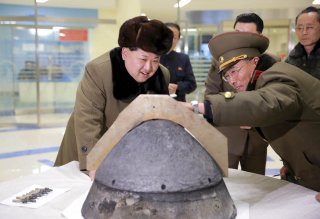 The Day of the Sun, North Korea’s celebration of the birth of the country’s founder, Great Leader Kim Il-sung, passed without international incident. However, the future might not be so pacific.

The latest report from the Office of the Director of National Intelligence (ODNI) warned that North Korea will remain a potential nuclear threat, given the living Supreme Leader Kim Jong-un’s active nuclear weapons program. ODNI warned that the North might resume testing of either long-range missiles or nuclear weapons this year, abandoning the moratorium imposed three years ago along with the first Kim-Trump summit.

Even more sobering is the joint report from the Rand Corporation and South Korea’s Asan Institute about potential North Korean nuclear developments. Obviously, the future is uncertain, but the assessment is ominous: “by 2027, North Korea could have 200 nuclear weapons and several dozen intercontinental ballistic missiles (ICBMs) and hundreds of theater missiles for delivering the nuclear weapons.”

This would move the Democratic People’s Republic of Korea into the second rank of the world’s nuclear powers. Although lagging behind the United States and Russia, its arsenal would approach that of China and France, approximate that of the United Kingdom, and exceed those of India, Israel, and Pakistan. That would make the DPRK the most powerful, problematic state on the planet.

It is worth considering what the North could do with such a force. Pyongyang enjoyed conventional superiority when invading South Korea in 1950 and threatening a repeat for years afterward. However, the DPRK’s eventual economic malaise and the Republic of Korea’s market-oriented “miraculous” growth transformed the peninsula’s power balance.

North Korea retains a quantitative military edge, and the mass of even older artillery and tanks concentrated on the capital of Seoul would wreak enormous damage. However, the apparent conventional advances unveiled in the North’s October military parade could not disguise the Kim regime’s essential weakness when facing modern, technologically advanced adversaries. Wartime is full of surprises, but there is no doubt that the ROK and United States, and perhaps even South Korea alone, would defeat the North, though the “collateral damage,” as mass death and destruction is commonly called, would be enormous.

However, the North Koreans are raising the stakes by developing nuclear weapons and seeking to reach the U.S. mainland. Observed the Rand/Asan report: “their nuclear weapon and ballistic missile programs have become their means for empowering their regime and working toward dominance. Today, even a few of the likely dozens of North Korean nuclear weapons could cause millions of fatalities and serious casualties if detonated on ROK or U.S. cities.” To that could be added the possibility of strikes on Tokyo and other Japanese cities, as well as Guam, an American territory that hosts U.S. military forces.

The increase in both quantity and sophistication would increase Pyongyang’s malign options. To the good, nothing suggests that Kim or anyone else in the DPRK’s leadership is suicidal. They do not desire to leave this earth atop a radioactive funeral pyre in Pyongyang.

However, in most wars, at least one participant miscalculates badly and often disastrously. Desperation would increase the likelihood of poor judgment and obvious blunders. The report raises the fearsome possibility of calculated recklessness: “the North Korean regime faces internal instabilities and is determined and ruthless; we cannot rule out North Korea trying to manage its internal problems by waging a limited or major diversionary war in which it would use nuclear weapons.” Such would be a prescription for escalation and destruction.

What to do in response? The authors offer a couple of remarkably bad ideas. For instance, “The ROK and the United States need to strengthen the ROK-U.S. alliance.” Is there anything more common than a public policy organization, especially one receiving U.S. government funding, advocating the “strengthening” of each and every alliance? Washington could be paired with Monaco or Eswatini, and op-eds, studies, and books would pour forth proposing ways to expand, extend, improve, advance, and, of course, strengthen the absolutely vital relationship at issue.

However, the U.S.-Korean alliance, along with the presumed American nuclear umbrella, is the problem in this case. Promising to use nuclear weapons on Seoul’s behalf works as long as the North does not have nuclear weapons or at least the capability to hit the United States with them. During the Cold War Moscow believed Washington’s threat to use nuclear weapons to protect Europe: the superpower confrontation was global and America believed that its security required preserving the continent’s independence from Soviet control.

The United States and North Korea are not similarly locked in a conflict, let alone one worldwide, and South Korea does not play a similarly critical role in the global balance of power. No U.S. interest in the ROK is worth risking a nuclear exchange involving the American homeland. Far from being an answer to an increased DPRK nuclear threat, the alliance could scarce survive it. Even a conventional war could go nuclear if South Korea and America appeared set on liberating the North, like in 1950. Then Kim would risk little demanding an allied halt and withdrawal or else.

Another Rand/Asan suggestion is even more frightening. The authors wrote: “The ROK and the United States also could use threats to pressure North Korea. For example, the United States could warn the North that if it appears to have fielded an unacceptable number of nuclear weapons (maybe 80 to 100), the ROK and U.S. might be forced to prepare to execute preemptive counterforce or decapitation attacks, or both.”

Such a policy would make the regime more suspicious and fearful. Pyongyang would have reason to act in even greater secrecy, more fully hiding weapons and disguising leadership movements. And emphasize more survivable weapons, such as submarine-launched ballistic missiles. Kim and his successors also might reduce already limited international contact, including future summitry.

Even worse, such an approach would make clear to the North what today it might merely suspect, that its military forces, conventional and nuclear alike, are essentially “use it or lose it.” Thus, in any conflict, real or imminent, the DPRK might decide that it must act quickly and decisively, and perhaps preemptively.

The possibility of North Korea becoming a serious nuclear power should energize diplomatic efforts to cap its arsenal. Whether or not Washington is willing to publicly admit that its effort to prevent the North from becoming a nuclear state is kaput, the Biden administration should focus on freezing North Korean efforts.

Equally important, the United States must consider the price it is willing to pay to defend its allies. Especially in a world in which most of America’s friends are well able to protect themselves and are not critical to America’s survival. The only existential military threat facing the United States today is nuclear war. Thus, there is nothing more important for Washington than precluding, deterring, thwarting, or otherwise defeating such an attack. Which requires avoiding involvement in any war which the DPRK perceives as posing an existential threat, meaning any conflict with America.

Despite a world filled with conflict and upheaval, the United States is more secure today than at virtually any other point in American history. The primary dangers come from getting entangled in other nations’ conflicts, such as on the Korean Peninsula. The results were awful in 1950. If the DPRK creates a nuclear arsenal numbering in the hundreds, then the consequences could be cataclysmic for the United States, unless Washington abandons its interventionist addiction.