Victor Cha: What Could Happen Next with North Korea 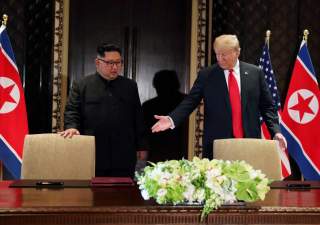 It has been one month since President Donald Trump and North Korean leader Kim Jong-un met in Singapore and signed a brief four-paragraph document that raised expectations that North Korea might finally be ready to make a strategic decision to abandon its weapons programs and join the international community. Let us recap what has followed this historic meeting. Trump in a wide-ranging press conference directly after the meeting, said that the North Korean leader had agreed to give up his weapons, and that as evidence of his good intentions, the DPRK would repatriate the remains of POW/MIA soldiers from the Korean war and would decommission a missile engine testing facility. Secretary of State Mike Pompeo made his third trip to Pyongyang last week to iron out some of the details of the Singapore statement and described the meetings as “productive.” He promised that working-level meetings would follow on repatriation of remains and that talks would continue on decommissioning of the missile engine test site.

Diplomacy with a country like North Korea has never been easy in my experience. Like Pompeo, I had no knowledge of my itinerary before I landed in North Korea, no sense of where I would be staying, and little sense of who I would be meeting. That is part of the cost of doing business with North Korea. Most diplomatic conventions are thrown out of the window. However, even handicapping for this, the results since Singapore leave a lot to be desired. North Korea has not yet decommissioned the engine test site despite President Trump’s boasting that this has already been done. Moreover, rumors are that the site in question is for liquid-fuel engines when the North has moved on to more sophisticated solid-fuel engine technology (liquid-fuel engines have longer launch times and therefore make them more susceptible to pre-emptive strike). So, it’s not that great of a step forward in disarming the regime. Despite Pompeo’s claims that his meetings in Pyongyang last week were productive, the North Korean news agency quoted unnamed DPRK officials as saying the meetings were terrible and that United States demands for denuclearization were “robber-like” (the media has translated this as “gangster”). More working-level talks on denuclearization are to take place at an unspecified time, but this hardly instills confidence as their ineffectiveness was what prompted Pompeo’s third trip to Pyongyang last week, making this city the most frequented foreign destination for the Secretary’s young term in office. As for the scheduled working-level meetings on repatriation of remains on July 12—something which Trump maintains publicly has already happened—the North Korean side never showed up.

This is hardly an impressive record of follow-through since the Singapore summit. But it is not yet time to abandon diplomacy. For one, the fact that talks are taking place are vastly better than the situation one year ago, when the Trump administration was actively considered a military strike on the regime that would have escalated into a devastating war. In addition, Donald Trump inadvertently has created “audience costs” for the DPRK leader in the sense that this isolated young leader clearly enjoys the world stage and summits with his American, Chinese and South Korean counterparts. Rumors are that the DPRK leader may even attend the UN General Assembly in New York this fall, which would be hard to do unless Kim started to make good on some of the deliverables in the Singapore statement.

Going forward, Pompeo has no choice but to continue to negotiate. Despite the “Hail Mary” nature of the summit, denuclearization talks with North Korea made halting progress one yard at a time. As was the case ten years ago when I was involved in talks, the issue of “sequencing” will again take center stage. That is, the North scoffs at disarming without some serious concessions by the United States first including movement on lifting sanctions, normalization of relations, conclusion of a peace treaty, and energy/economic assistance, while we have said that denuclearization is the key that unlocks the door to all of these benefits.

It is possible that Donald Trump might again try to break this cycle by offering up some of these concessions in advance, in particular normalization of relations and a peace treaty ending the Korean war. These steps would indeed be historic and would fit his personal narrative of wanting to win the Nobel Prize for doing something that his predecessors could not accomplish. There is no promise that even these actions, however, would lead the North to abandon permanently its nuclear weapons and ballistic missiles. After all, the North’s endgame is to achieve de facto acceptance by the United States as a nuclear-weapons state, and to conduct arms-control negotiations that reduce tensions on the peninsula (but not denuclearization).

But for Donald Trump, a partial denuclearization may be all that he needs to claim victory, particularly if he uses such an imperfect deal as a platform for then withdrawing U.S. troops from Korea. Trump has already unilaterally suspended U.S.-ROK military exercises because they are “provocative” (North Korea’s description adopted by Trump) and because they are “expensive” (Trump’s words adopted by Trump). He has also been very clear since the 1990s that he does not understand why the United States bears costs for stationing troops in Korea when the Koreans are a “rich country” that can defend themselves.

Should the president see U.S. troop drawdowns as the ultimate solution to extricate himself from this problem, he will not only have done permanent damage to our alliances in Asia, but he will have also emboldened North Korea and led it to believe that its decades-long strategy to use the nuclear threat to remove the United States from the peninsula has finally succeeded. Such an outcome would be warmly welcomed by China and Russia as further evidence of the diminution of the U.S. hegemonic position in Asia. In the end, this will make Americans less, not more, secure.

Victor Cha is the D.S. Song-KF Chair of Government in the School of Foreign Service at Georgetown University and is the senior adviser and Korea Chair at the Center for Strategic and International Studies in Washington, DC.  He was on the National Security Council staff from 2004 to 2007 and also served as U.S. deputy head of delegation for the Six Party talks in 2006–2007.

Image: U.S. President Donald Trump and North Korea's leader Kim Jong Un (L) arrive to sign a document to acknowledge the progress of the talks and pledge to keep momentum going, after their summit at the Capella Hotel on Sentosa island in Singapore, June 12, 2018. REUTERS/Jonathan Ernst/File Photo