Why North Korea Turned Inward After the Trump Era 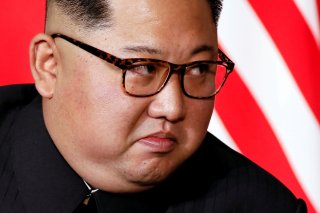 Kim Jong-un continues to abandon what once appeared to be a hallmark of his tenure: a commitment to economic growth and support for economic reform. Indeed, Kim seems to be racing back into North Korea’s collectivist past.

“North Korean teenagers and twenty-somethings are following the government’s call to leave home for coal mines and construction sites, and the country’s leader Kim Jong Un reportedly thanked them for their sacrifices in a new letter released in state media on Sunday,” reported Colin Zwirko of NKNews. This sounds like the Chinese “rusticated youth”—around 17 million over a dozen years—heading off to the countryside during the Cultural Revolution when ideological fervor displaced economic development and rational thinking.

Both founder Kim Il-sung and successor Kim Jong-il appeared to treat economic growth as a threat to their rule. Even mass starvation did not cause the latter to change course. Rather, his government’s inability to feed its people effectively forced North Koreans to exercise private initiative to survive, and he subsequently allowed the resulting markets to survive.

The Chinese later tried whisking Kim Jong-il around Shanghai, suggesting that he take a similar reform course and profit from the results. Unfortunately, Beijing’s hope for significant change was, as always, dashed. Kim Jong-il grew to fear the new monied class and in 2009 initiated a currency “reform” that destroyed much of the private wealth that had been created. “This move is part of Pyongyang’s broader effort to curtail the rise of market activities and the development of pathways to wealth—and potentially power—beyond state control,” Marcus Noland of the Peterson Institute for International Economics explained.

However, this appeared to be one area where Kim Jong-un was prepared to break with his predecessors. Although his policy initiatives fell far short of what is necessary to transform the Democratic People’s Republic of Korea, they were real, affecting both agriculture and industry.

Kim Jong-un had to agree to the changes, but his commitment even at the time might have been superficial. “My explanation is that the true authors of the reforms are individuals—or maybe even one person—in the North Korean elite, but not Kim himself,” Fyodor Tertitskiy observed. They prepared the plans, which were then signed by Kim Jong-un: this would logically explain virtually all the “oddities” reflected in the economic plans.

Nevertheless, by Donald Trump’s presidency, Kim Jong-un was promising the North Korean people that economic growth was his top priority. Perhaps this sparked the president’s emphasis on the potential economic reward for denuclearization. Indeed, the administration even prepared a curious video purporting to show the kind of economic development that North Korea could expect if Kim Jong-un yielded his nuclear arsenal. Moreover, economic growth was Kim Jong-un’s objective in his push at Hanoi for major sanctions relief.

However, that world has disappeared. Kim Jong-un’s government turned inward after Trump’s rebuff. The former has since sealed his nation’s borders because of the coronavirus, retreated on previous economic reforms, reemphasized military and nuclear development, and warned his people of another “arduous march,” which is the euphemism for the deadly famine of the 1990s. Indeed, Tertitskiy appeared prescient four years ago. “If my hypothesis is true, that means that prospects for the North Korean economy are not bright,” Tertitskiy wrote. “These reform instigators are not in total control of the country, and their efforts are constantly being sabotaged by whoever is in charge of foreign policy.”

Coincidentally or not, Kim Jong-un also has launched a serious campaign against access to the outside, meaning mostly South Korean, culture, and for ideological rejuvenation. Now the DPRK is sending its youth off on an ideological campaign to achieve economic ends, a traditional communist tactic. “Thousands of these youth ‘volunteers’ who gathered in Pyongyang on Saturday to celebrate Youth Day, a holiday that Kim has said is meant to demonstrate the organizing ability of young Koreans and inspire the nation to work with youthful vigor,” Zwirko wrote.

What is notable is how Kim Jong-un addressed both concerns, insisting that “vicious sanctions and pressure and tenacious ideological and cultural infiltration has vanished like bubbles in the face of this strong current” of youthful activism. Kim Jong-un compared other nations unfavorably. “Young people around the world are flowing into their capital and other cities in pursuance of their avarice and personal pleasure,” he said. “Only the Korean young people who have grown up under the embrace of the socialist motherland unhesitatingly volunteer to exchange their cards of capital citizenship with notes of dispatch to coal mines, cooperative farms, grand construction sites and islands far from cities.”

If he holds to this policy, then the outcome will undermine economic progress in the short-term and ideological fervor in the long term. Sending China’s young to labor in tasks about which they knew nothing while sacrificing their education did not transform the nation for the better. On the contrary, the costs were great. Over time many if not most of those conscripted also grew disillusioned with the regime and its self-serving fantasies.

Why Kim Jong-un has so dramatically shifted course is unknown. He may have decided that sanctions relief is impossible without giving up nuclear weapons. Or he may have decided that his father and grandfather were right, that economic contact with the South and rest of the West threatens the regime and his dynasty. The best-case scenario is that his new posture is a holding pattern, preparing for prolonged autarky and, if necessary, increase his leverage for later talks.

However, Washington must consider the possibility that Kim Jong-un’s reticence with engagement is not a political game but a new national strategy. His government has apparently restarted its nuclear reactor at Yongbyon, capable of producing plutonium which would back Kim jong-un’s stated plans to add submarine-launched, tactical, and super-size nuclear weapons to his arsenal. “The enemies are now trembling with terror at this powerful current and spirit,” Kim Jong-un declared.

If Kim Jong-un is prepared to make his country’s impoverishment permanent while expanding his military capabilities, then the United States and Allied states will have to rethink their policy options, of which none are good. Imagine North Korea as China once was, a radicalized, isolated pariah state with a significant nuclear capability. That is a future that no one wants to contemplate.