What If Kim Jong-un Isn’t Really in Charge of North Korea? 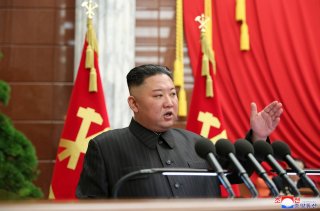 Decisions made by North Korea’s government often baffle outsiders. The leadership is not crazy, despite popular depictions, but the system is anything but normal.

U.S. policymakers desperately want to discern why the North takes certain actions, but often are left with little more than the knowledge that the country is, after all, the Democratic People’s Republic of Korea. But what if the conventional wisdom about who is in charge in Pyongyang is wrong?

Most twenty-seven-year-olds are not given a country to rule. When Kim Jong-il died nearly a decade ago, his son, Kim Jong-un, appeared to be the lucky winner. The Great Successor, as the latter was initially tagged, was handed the keys to the North Korean kingdom. Over time he picked up a gaggle of other prestigious titles including Supreme Leader and Chairman of the Workers’ Party of Korea, recently changed to General Secretary.

From the start, there was skepticism that he was in control. Kim Jong-il apparently began the succession process for his son only after recovering from his stroke in 2008, which contrasted sharply with Kim Jong-il’s much longer apprenticeship under DPRK founder Kim Il-sung. On Kim Jong-il’s death, Kim Jong-un was surrounded by members of the older generation tasked to act as “mentors.” Chief among them were his aunt, Kim Kyong-hui; uncle, Jang Song-thaek; and chief of the army general staff Ri Yong-ho.

Some analysts believed that a form of collective leadership was more likely than a reprise of his father’s unilateral dictatorship. Unfortunately, one can only peer into the DPRK through a glass darkly. At the time, watching Kim Jong-un wander hither and yon “giving guidance” was susceptible to multiple interpretations: Kim could be truly supreme, the frontman for a band of equals, or merely a figurehead used to present the royal Kim lineage to the public. He often appeared decidedly unserious—and certainly less than a genuine “Supreme Leader”—as when he cavorted with Mickey Mouse and hosted Dennis Rodman.

Then came the purges, with more than a few executions. Just months after Kim’s accession Vice Marshal Ri was defenestrated at a special politburo meeting for reasons of “health,” his ultimate fate, whether retirement, house arrest, or execution, is unknown. Although Ri was not the first top official to disappear, his role had been more public, frequently appearing at Kim’s side. Jang’s fall was even more dramatic: his two top aides were executed, his arrest was staged at a party meeting, and he was executed, a fate not previously visited upon family members. His wife disappeared from public view and was rumored dead, but reappeared six years later.

The common interpretation was that Kim was consolidating power, dropping his father’s factotums in favor of his own. The notion that Kim might not be in charge died away, and he was seen as living up to his title of Supreme Leader.

He dominated the North Korean media, enjoyed a private life of luxury, and appeared to be the sole decision-maker regarding nuclear weapons. And who else in the world travels with his personal potty to prevent—we presume, anyway—foreign intelligence agencies from examining his deposits? In a recent interview with NKNews, former Deputy Secretary of State Stephen Biegun observed that the vast majority of “experienced North Korea experts” would “scoff at” the notion “that there could be any governor on the decision-making or direction of the leader.”

Yet Biegun raised the intriguing possibility that Kim’s power might not be absolute. Certainly, high-profile leadership changes could be explained as the result of factional warfare when changing coalitions acted against adversaries. Indeed, the deaths of Joseph Stalin and Mao Zedong led to periods of significant political instability. In both cases, strong leaders eventually emerged. However, rather than settling in for a long reign, the Soviet Union’s Nikita Khrushchev was ousted after only a few years. In China, the most powerful figure wielded power unofficially: “paramount” leader Deng Xiaoping lacked formal control yet picked and dismissed party leaders. Much of his authority reflected his backroom ability to persuade a cohort of elders to back his positions.

Biegun offered no direct evidence that Kim was not “the decider.” However, the former diplomat noted otherwise inexplicable decisions by the North on the nuclear issue. Biegun cited “something that was a recurring pattern, not just after the Hanoi meeting but after many of the meetings. That there was a lot of enthusiasm and energy between the two leaders coming out of the meeting but then on the North Korean side would fall flat.”

When asked if there was an internal North Korean issue, Biegun admitted that he didn’t know, “yet we saw a pattern of momentum coming out of the meeting. The same in October, when, October 2018, when Secretary of State [Mike] Pompeo met with Chairman Kim. There was a lot of energy coming out of that meeting and then it just fell flat again.” He figured that the explanation might have to wait until the North’s archives are opened.

Biegun noted that he was not alone in raising this question. Thomas Schaefer spent several years as Germany’s ambassador to North Korea and last year published From Kim Jong Il to Kim Jong Un: How the Hardliners Prevailed. In it he pointed to otherwise unexplained conflicting statements and policy shifts which, in his view, suggested Kim was not the unilateral decision-maker and therefore must at least accommodate and probably even defer to a powerful security cabal. Schaefer also cited evidence of senior officials publicly showing a lack of respect toward Kim.

Schaefer contended that the dynamic began under Kim Jong-il, who “was politically weakened after suffering a stroke in the summer of 2008, as he had to win the approval of the elite, and especially the armed forces, if Kim Jong-un was to be accepted as his successor.” Schaefer saw the factional fighting worsening after Kim pere’s death, with China relations, nuclear policy, and the military’s role major issues of contention. He also blamed the military for sabotaging civilian agreements, such as the 2012 Leap Day Agreement.

Of Kim fil’s role, Schaefer wrote: “In fact, there is no evidence that Kim Jong-un is an absolute ruler. Nevertheless, an astonishing number of foreign observers replicate the official account without voicing any doubt or looking for proof. At best, they refer to the way propaganda stages power and to statements by North Korean minders, interviewees, or refugees—often without questioning whether they are revealing their true opinion, whether they themselves are victims of state propaganda, and whether they have any insight into the decision-making of the North Korean leadership.”

It’s an intriguing thesis that could explain Kim’s effective refusal to reengage after Hanoi. If true, little should be expected of him since he presumably lacks the authority to force through any agreement. And a hardline “leadership circle,” as Schaefer called it, probably would mean proposals for denuclearization are chimerical, with no chance of success absent a dramatic power shift in Pyongyang. Neither famine nor sanctions would be likely to change the North’s policy.

The United States still might try to influence the North’s internal political dynamics. However, that would be an extraordinary long-shot. Maybe adjusting sanctions to allow the ROK to pursue projects with the North would strengthen civilian efforts to promote economic development. Yet any positive impact likely would be marginal at best. Moreover, Pyongyang’s response to the Covid-19 pandemic currently precludes most outside contact.

The best approach might be to simply propose increased bilateral contact without much hope for serious negotiation. Washington should end the ban on travel to the DPRK, to expand personal, non-political contacts; propose liaison offices, since talking to armed adversaries is more important than talking to friends; offer vaccines and medical assistance; and seek to revive the search for the remains of American military personnel.

Winston Churchill once described the Soviet Union as “a riddle, wrapped in a mystery, inside an enigma.” So is North Korea, though even a bit more mysterious. The Trump administration made an extraordinary if flawed effort to negotiate a nuclear deal with the North. Blame for the failed negotiation has been widely assigned, but perhaps the biggest problem simply was that the North’s leadership was not as assumed.

Still, there is no obvious alternative to continued diplomacy. Military action would risk triggering a regional and nuclear conflict. Sanctions provide an incentive to negotiate but aren’t likely to force the North to surrender its arsenal, especially if Beijing continues to help keep the DPRK afloat. Washington needs to talk to whoever is in charge in Pyongyang.