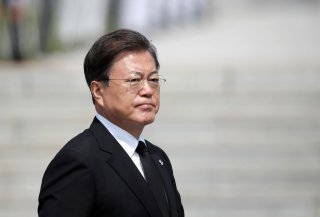 How quickly political fortunes change in South Korea. Two months after the ruling Democratic Party won a historic supermajority, President Moon Jae-in’s approval rating is on the decline again, and his party is facing pressure over its North Korea policy and investigations into party members.

South Korea was widely praised domestically and internationally for quickly reversing the outbreak of coronavirus that began in Daegu in February. By April, when the elections were held, new cases were in the single digits. The credit for their success went to the president and his party. But, since then, a few local outbreaks have occurred and new cases continue to trickle out at a rate of between thirty and sixty per day.

Now Moon’s coronavirus bonus has worn off, and he’s facing new pressure on multiple fronts. Even before North Korea blew up the liaison office, Moon’s approval rating was already on the downturn.

After peaking at 61.5 percent approval the second week of May, Moon had dropped to 54 percent by mid-June. Now with South-North relations reduced to rubble, voters’ attitudes have shifted. Moon is blamed by many for offering too much to Kim Jong-un and getting nothing in return.

Just before the demolition, a plurality of voters—41.4 percent to 31.1 percent—supported having the National Assembly formally ratify the Panmunjom Declaration that Moon signed with Kim in 2018. Now a majority, 51.6 percent, opposes ratification, with pluralities of each age group opposing it. 86 percent of supporters of the opposition United Future Party and 63.6 percent of independent voters oppose ratification of the Panmunjom Declaration, while 70.5 percent of Democratic Party loyalists still support it.

Moon also has to contend with fallout from John Bolton’s book, The Room Where It Happened. Not only does it put his negotiating partner, President Donald Trump, in a tough spot, the book also contains criticisms of Moon and his administration. Bolton wrote that Moon had a “schizophrenic” attitude towards North Korea and that he led the United States to the negotiating table while misunderstanding American objectives. Moon (along with Trump) was “eager to play down the significance” of North Korean missile launches that violated UN Security Council resolutions. According to Bolton, Trump and Kim tried to exclude Moon from their April 2019 meeting at Panmunjom, and Trump nearly fell asleep while Moon was speaking.

On Korea’s worsening relationship with Japan, Bolton wrote, “[I]t wasn’t Japan that was raising the history, but Moon, for his own purposes. … Moon tried to make Japan an issue when times at home were difficult.”

The United Future Party is demanding an investigation and wants Bolton to testify in front of the National Assembly. Kim Ki-hyun, a five-term legislator from Ulsan, described Moon and Trump’s peace talks as “the world’s highest fraud.”

The Democratic Party’s floor leader, Kim Tae-nyeon, has slammed the contents of Bolton’s book as “bullsh*t.” Foreign Minister Kang Kyung-wha said his claims were distorted by his “far-right perspective” and lamented his influence over North Korea policy. The Blue House said his description of the summit was full of “prejudice and bias.”

Besides attacking his credibility, Moon allies have also characterized Bolton as “pro-Japan.” Bolton’s criticism of Moon over the historical issues would be considered as praise by a wide swath of the Korean public.

This all means that Moon will have a hard time pursuing his agenda, particularly on North Korea, even with unquestioned control of the legislature. While Korean conservatives feared that Moon would steamroll over objections to push a far-left agenda that put national security at risk, he has already had to step back and put up a facade of strength. He has given up on the idea of ratifying the Panmunjom Declaration for the time being.

North Korea’s recent provocations, which also include cutting off its line of communications with the South and publicly attacking Moon, could be a way of establishing Kim Yo-jong’s authority at a time when Kim Jong-un’s health status is still uncertain. In fact, North Korea had signaled its dismay and announced an end-of-year deadline in December. The coronavirus might have delayed some of their actions, but even in March, they were launching large amounts of missiles.

Moon is not on solid ground in domestic politics, either. He and his new Justice Minister, Choo Mi-ae, appointed in January, are at odds with Prosecutor General Yoon Seok-youl over plans for reforming and reducing the power of prosecutors.

Not only does Yoon oppose Moon’s plans, they also clash on some specific investigations he’s overseeing. Yoon has not been investigating the spread of the coronavirus at the Shincheonji Church of Jesus as aggressively as Choo would like. Yet, he is aggressively investigating some of Moon’s aides and supporters.

In January, Choo reassigned thirty-two senior prosecutors, including the prosecutor who led the investigation into former Justice Minister Cho Kuk, which led to his resignation. Cho Kuk is considered a hero by progressive activists for his activities as a student radical for which he was imprisoned by the Chun administration in the 1980s.

In May, Yoon began an investigation into a Korean comfort women advocacy group and its leader, Yoon Mee-hyang, who was elected to the legislature as a Democrat, for alleged misappropriation of funds meant for comfort women. Because the 2015 agreement with Japan was used to attack the last conservative president, Park Geun-hye, and because conservatives tend to be more sympathetic towards Japan than they are to China, advocacy for comfort woman issues tends to be associated by some with support for liberal/progressive politics. The Hankyoreh, Korea’s leading progressive newspaper, writes that the far right is trying to “exploit [the] Yoon Mee-hyang controversy to rewrite [the] historical narrative.”

Although Yoon was appointed by Moon and presided over the investigations and prosecutions of Park, former conservative president Lee Myung-bak, and former chief justice Yang Sung-tae (a conservative who was tied to Park), Yoon himself holds conservative views. And he’s considered a potential contender for the UFP nomination in the 2022 presidential election. In a survey published June 30, he ranked as the  leading opposition contender.

With Kim’s friendship souring, Bolton’s book out, and a troublesome prosecutor, Moon and Trump will have a lot to talk about the next time they meet.