Why Is North Korea Starting a Crisis Now? 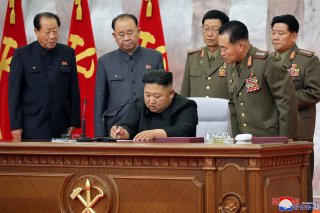 When North Korea wants to hang up the phone, it doesn’t just put the receiver back in its cradle. It’s not even enough to cut the line. No, Supreme Leader Kim Jong-un and his Supreme Sister Kim Yo-jong took “don’t call me; I’ll call you” to a whole new level this morning when they blew up the entire inter-Korean liaison office in the border town of Kaesong. They really don’t want to talk—and they want everyone to know it.

Does this mean that tanks will soon be rolling across the DMZ?

Once upon a time, cutting communications might have meant the imminent commencement of hostilities between two countries, but those times are long past, and North Korea is no ordinary country. In the theater of the absurd that is North Korea, the detonation of the Kaesong liaison office could be a sign of a raging internal power struggle, or it could simply mean that the building was due for renovations, and one of the Kim siblings thought it would be more fun to blow it up than to take it down in a more conventional manner. If their father, part-time movie director and full-time Eternal Leader Kim Jong-il were still alive, the explosion might have been staged as part of a film shoot.

The U.S. Indo-Pacific Command is taking no chances. All three of America’s currently active aircraft carrier strike groups are now patrolling the Pacific, two in the West and one in the East, apparently heading that direction. Chinese state media has gone crazy over the perceived threat, highlighting the PLA’s anti-ship missile capabilities, but the reality is that these forces are more likely there as an insurance policy against instability in North Korea than to bully or confront China. Aircraft carriers would not be very useful in a Hong Kong crisis. They might be very useful in a North Korean one.

For the truth is that almost anything could happen in a febrile North Korea, ranging from a missile shot over Japan to a complete collapse of the Kim regime. The North’s nominal reason for the cutting of the phone lines and demolition of the liaison office is that South Korea has allowed North Korean defectors to float anti-regime leaflets (along with bottles of water and bags of rice) over the border in an improvised balloon airlift, but the South has actually arrested many of those responsible. And in any case the leaflets can’t get very far, or tell people living on the border anything they don’t already know. The true reasons for (and thus the potential consequences of) all the bluster must run deeper than the leaflet dispute.

A more likely explanation is that something is going on in the North that is, as yet, invisible to outside observers. Remember that Kim Jong-un disappeared for three weeks in April-May, and has only rarely been seen since. His sister, Kim Yo-jong, has suddenly taken on a much more prominent—and much more militant—role in governing the country, even apparently taking it upon herself to issue orders to the military in her own name. Is brother Kim sick? Is sister Kim taking over the family business? Has coronavirus collapsed the economy, and with it the country’s ability to support its outsized military? No one really knows, and no one knows what might happen during any possible leadership transition, which may or may not be in progress.

Thus the three aircraft carriers. Obviously, there will be no American attack on North Korea. Such an action is only imaginable in the dreams (and nightmares) of North Korean military planners. But were a jittery North Korea to launch more cruise missiles over the Sea of Japan, test an ICBM that could potentially reach Hawaii (or beyond), or take some other provocative action, a strong naval presence would materially improve America’s ability to track, identify, and if necessary shoot down any dangerous object. It’s simply a matter of deploying naval assets where they are most likely to be useful, and right now, it’s hard to think of a place in the world where they are more likely to be useful than in the Western Pacific.

The deployment of three aircraft carriers is an expensive insurance policy, but a necessary one. North Korea is one of the world’s most unstable countries, made all the more dangerous because it is so opaque. Whatever the status of North Korea’s nuclear program, the country’s internal instability is probably even more of a threat, because it is difficult to plan for contingencies when the universe of possible outcomes is simply unknown. It is almost certain that any crisis in North Korea will not require the firepower (and surveillance capacity) of three aircraft carrier strike groups. But without a list of possible crises to work from, the world is walking in the dark. We can only hope that North Korea isn’t walking in the dark, too.