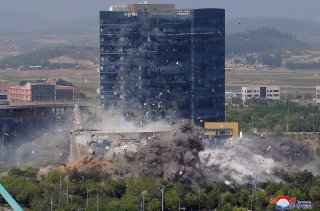 On Tuesday, North Korea blew up the inter-Korean joint liaison office based in Kaesong that once facilitated communication and cooperation between the two Koreas. Moreover, Pyongyang also declared it has scrapped the inter-Korean military agreement signed in 2018 and appears to have begun deploying some of its soldiers to the demilitarized zone. North Korea has claimed that the measures are just the beginning and has vowed to take further action, opening up a new round of hostilities that threaten regional security.

While North Korea argues that the latest series of actions were countermeasures against South Korea’s slow response to stop anti-Pyongyang leaflets airdropped by certain civic organizations, Pyongyang’s true rationale is much more complex.

As is often the case, North Korea’s actions are based on three intertwining factors: the leadership’s legitimacy, inter-Korean relations, and the United States. In this case, North Korea argues that both America and South Korea failed to do their part in lifting sanctions as well as ending their hostile postures despite Kim Jong-un’s acts of goodwill for “peace” that included participation in summits, signing of the aforementioned inter-Korean military agreement, and the self-imposed ICBM and nuclear testing moratorium. Based on these factors, North Korea sets the narrative within the country (and with anyone sympathetic to Pyongyang) that it has been betrayed, and that the slow progress towards peace and its current economic troubles are all because of the United States and South Korea.

Certainly, North Korea was interested in rapprochement, but for reasons much different from the South. For North Korea, the reconciliatory events in 2018 were avenues towards negotiations with the United States for an advantageous peace treaty and the lifting of international sanctions. Moreover, Pyongyang wanted to milk out unconditional economic, security, and political concessions and compromises that benefit the totalitarian regime. Yet since 2019, North Korea felt that none of the above were achieved, thereby judging that relations with South Korea are now sacrificeable. North Korea’s message to South Korea is clear: “Until you give us all we the things we want, you’ll pay the price.”

Given that the joint liaison office and the military agreement were some of the key icons of the 2018 inter-Korean exchanges, the demolishment of the facility and trashing of the agreement is propagated as a victory for North Korea. In particular, there was emphasis on the role played by Kim Yo-jong—Kim Jong-un’s younger sister and First Deputy Director of the Central Committee of the Workers’ Party of Korea. For Kim Yo-jong, spearheading the initiatives to gain the upper hand over South Korea was not just about achieving North Korea’s strategic interests, but also to shore up legitimacy by demonstrating her strong, unrelenting leadership as the second-in-charge and as the potential successor to Kim Jong-un.

North Korea actions are certainly heartbreaking and humiliating for the progressive Moon Jae-in government and the ruling party that often gives Pyongyang the benefit of the doubt and pursues unconditional reconciliatory gestures rather than addressing security interests and human rights abuses by the Stalinist state. However, there are now growing questions among South Koreans about the credibility of engagement with North Korea, not just due to Pyongyang’s bellicose words and actions, but also the fact that it was Seoul that paid approximately USD 15 million to cover all the costs of building and renovating the de facto embassy that has now been demolished.

The South Korean government has vowed to “strongly respond” against any further hostile actions and has put its armed forces on higher alert. Yet North Korea well understands the dilemmas faced by the Moon Jae-in administration and the ruling party. Pyongyang believes that Seoul’s toughness will be limited and that it will eventually return to appeasement. Even if South Korea does take tougher measures, North Korea will simply use it as an opportunity to up the ante.

Indeed, the demolition of the joint liaison office is different from Pyongyang’s past provocations. After all, the facility was in North Korean territory and had virtually ceased to operate for several months. Yet still, North Korea has not only unilaterally gutted the efforts for reconciliation to date, but is now remilitarizing the inter-Korean relations, putting the Korean peninsula and the region at greater risk.

Combined with the series of short-range missile tests and the continued production of various weapons systems over the past year, North Korea’s recent actions and statements toward South Korea and the United States clearly proves the insufficiencies of the strategies to date. Pyongyang will not give up nuclear arsenals, nor stop its bellicose, extortive, and manipulative practices simply in exchange for the lifting of sanctions. Rather, prematurely lifting sanctions or making any compromises will only set a bad precedent, giving North Korea further opportunities to push the envelope to make more gains. While peaceful solutions are undoubtedly vital, it is also critical to reconfigure the means and ends to adequately deal with the threats posed by North Korea once and for all.

Ryo Hinata-Yamaguchi is a visiting professor in the Department of Global Studies at the College of Economics and International Trade, Pusan National University, and an Adjunct Fellow at the Pacific Forum.​ You can follow him on Twitter: @tigerrhy.