Why Is North Korea’s Kim Yo-jong Attacking South Korea (and Not Kim Jong-un)? 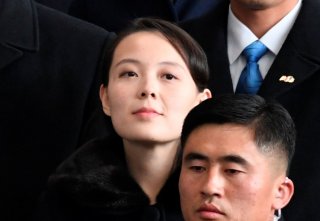 North Korea’s leaders are once again causing raised eyebrows around Asia and much of the globe. This time it is led by Kim Jong-un’s sister, Kim Yo-Jong, rather than Kim Jong-un. She is clearly raising the level of antagonism to a degree that has not been seen in at least two years. It is herself as the messenger of fury, as much as the words themselves, that is causing leaders on both sides of the Pacific to take notice. North Korea just blew up the Inter-Korean Liaison Office, cut off communication channels with South Korea, and vowed to send additional troops to the border. Shortly after this, Kim Yo-Jong berated South Korean President Moon Jae-in for lack of action on improved relations between the two nations on the Korean peninsula. Kim Yo-Jong’s anger comes after North Korean defectors dispersed anti-Pyongyang leaflets critical of Kim Jong-un’s leadership.

The question emerges, why it was Kim Yo-Jong who made this aggressive declaration and not Kim Jong-un himself?

In discerning the likely reasons why, it is important to note a few things. First, both her words and actions were aimed at a very high level. Kim Yo-Jong specifically took aim at South Korean President Moon Jae-in accusing him of being “an impudent man” with “disgusting behavior.” Second, the sister specifically stated that she was “exercising her power authorized by the Supreme Leader.” And third, her criticism of the United States was much more reserved than historically comparable statements by other North Korean leaders of the past. Over the last sixty of seventy years, North Korea’s denunciations of the United States have been brutal. However, this time although Kim Yo-Jong expressed frustration at the lack of progress in talks with President Trump and called on the United States to, in essence, mind its own business, a salient fact to note in her diatribes is that she has reserved her worst attacks for South Korea.

With the above points in mind, there are probably two primary reasons why Kim Yo-Jong made these statements and not her brother. First, and most important, the level of authority she exercised when making these statements and ordering North Korean actions clearly established her as a key leader in North Korea. This increases the chances that she will become a figure head should Kim Jong-un pass. This is important because there is still some uncertainty regarding the true state of Kim Jong-un’s health. Given that his appearances have been rare and the time between each of them quite long, there are still rumors that persist about the state of his health. Are his reduced public appearances due to his concerns about the coronavirus or are there other health concerns?

In addition, when rumors of Kim Jong-un’s health issues emerged in late April, it was clear that Kim Pyong-il, who is Kim Jong-un’s uncle, was also considered a viable candidate to become Supreme Leader. Kim Jong-un’s clearly prefers his sister to the sixty-five-year-old uncle. Recent developments may have presented an opportunity to express that preference. This is especially important because Kim Yo-Jong is a woman and without the clear message that Kim Jong-un prefers her, in North Korea her gender could be an obstacle to her eventually rising to power. Her aggressive speech, clearly sanctioned by Kim Jong-un, has bolstered her position in North Korea. This especially helps establish her place, should Kim Jong-un pass prematurely. Given the current status of women in North Korea, even if Kim Jong-un passed, she would be unlikely to rule alone. Rather, she would likely be a figurehead with a set of leading males collectively running the country.

A second reason why Kim Yo-Jong made these statements and not Kim Jong-un is because it possibly leaves the door open for President Trump to make a move aimed at trying to bridge differences, without implicating Kim Jong-un, personally, for the recent friction. Kim Jong-un is likely concerned that President Trump could lose the election and, given his special relationship with President Trump, believes his best opportunity for progress is with the current President. North Korea may view provocative comments by Kim Yo-Jong aimed primarily at South Korea as its best chance to bring Trump to the table and end sanctions. On the surface, the chances of a meeting between Kim Jong-un and Donald Trump now seem remote, due to these recent severe actions by North Korea. However, North Korea has a history of acting in a bellicose manner to get what it wants. Hence, a meeting between the North Korean and American leader may not be totally off the table. Time will tell.