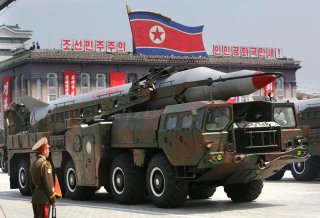 South Korean president Yoon Suk-yeol announced Monday that he had offered Pyongyang a comprehensive long-term aid and investment package in exchange for its gradual denuclearization. The deal, he insisted, is “essential” for inter-Korean stability, but North Korea is considered by most experts to be unlikely to take it.

Yoon announced the proposal during remarks commemorating the August 15 anniversary of Japan’s surrender in World War II, freeing Korea from Japanese colonial rule but setting the stage for the peninsula’s division between the Western-supported south and the Soviet-backed north. During his speech, the South Korean leader emphasized unity, insisting that the two Koreas had been unjustly separated and leaving the path open to future reunification.

“The audacious incentive that I envision will significantly improve North Korea’s economy and its people’s livelihoods in stages if the North ceases the development of its nuclear program and embarks on a genuine and substantive process for denuclearization,” Yoon said, repeating a similar offer that the president had made in his inaugural address in May. However, experts have warned that the North Korean government is unlikely to be receptive to such a proposal, given the high value that it places on its development of nuclear weapons. In all previous negotiations, successive North Korean leaders have refused to accept a “grand bargain” exchanging Pyongyang’s nuclear capability for substantial economic aid from South Korea and the United States.

Inter-Korean relations, never peaceful, have grown steadily more hostile since Yoon took office. Earlier in the year, Pyongyang launched an intercontinental ballistic missile (ICBM) for the first time since 2017, and North Korea’s military has taken steps in recent months suggesting that it will soon test a nuclear weapon, marking its seventh test and the first in five years. Last week, North Korean officials threatened to “wipe out” Seoul as retaliation for the South Korean government’s perceived role in spreading COVID-19 into North Korea—allegations South Korea has denied.

During his tenure in office, Yoon’s predecessor, President Moon Jae-in, repeatedly sought to improve relations with Pyongyang. The former leader found an unlikely ally in President Donald Trump, who established a curious but enduring rapport with North Korean leader Kim Jong-un and attended a series of bilateral summits in Singapore, Hanoi, and at the “Demilitarized Zone” separating the two Koreas. By contrast, Yoon has indicated that he would take a more hawkish position on North Korea and vowed to strengthen security cooperation with the United States—a position that Pyongyang has vocally opposed.