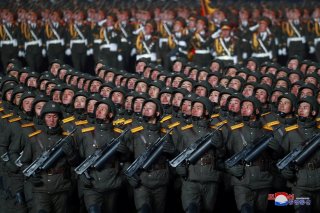 Washington and Seoul are making new war plans to address North Korean force improvements. However, the Pentagon is rather busy right now. Military analysts are talking about possible conflicts involving Russia, China, and Iran. Could Washington handle a fourth conflict, and all at the same time?

According to CNN: “The US and South Korea will develop a new operational war plan to address the threat from North Korea, senior defense officials said Tuesday, as the Pentagon shifts its focus to the Indo-Pacific region following its recently completed global force posture review.” Officials say that the effort does not respond to any one incident but rather to the fact that the current plan is about a decade old.

The review reflects a greater emphasis on the Indo-Pacific. Deputy Assistant Secretary of Defense for Strategy and Force Development Mara Karlin explained: “The Global Posture Review directs additional cooperation with allies and partners across the region to advance initiatives that contribute to regional stability and deter potential military aggression from China and threats from North Korea.” That is, the usual boilerplate.

However, the timing raises the question of how many crises the United States can handle at once. Over the weekend the G-7 met in the United Kingdom and issued a statement targeting Russia’s threats against Ukraine: “Any use of force to change borders is strictly prohibited under international law. Russia should be in no doubt that further military aggression against Ukraine would have massive consequences and severe cost in response.”

Although the focus is on economic sanctions, policymakers were considering a range of U.S. military options. One is to heavily arm Ukraine, send special operations forces to Ukraine to create a human tripwire, and encourage allies to do likewise. Another would expand the potential field of operations, threaten the Russian-supported breakaway territories of Abkhazia and South Ossetia with invasion, convince Turkey to favor the passage of allied warships into the Black Sea to gain naval superiority, and blockade the isolated Russian territory of Kaliningrad. Senator Roger Wicker proposed active combat involvement, using ground forces, ships, and even nuclear weapons.

Wouldn’t that be fun!

President Joe Biden said he would not “unilaterally use force to confront Russia.” That appeared to preserve the option of a multilateral response, however unlikely that might seem. Moreover, the greater the concentration of opposing forces, the greater the chance of mistaken or accidental conflict.

Taiwan is another dangerous crisis du jour. Most of the DC foreign policy community appears to support U.S. military intervention if China uses force against Taiwan. Biden made the commitment unambiguous before his aides insisted that nothing had changed. Support in Washington is growing for the United States to formally declare that it will go to war for the island, just 100 miles off China’s coast. One notable convert is the venerable Richard Haass, president of the Council on Foreign Relations.

…defined Taiwan’s strategic importance as deriving from the notions that it is: a “critical node within the first island chain,” “integral to the regional and global economy,” and a “beacon of democratic values” in contrast with the People’s Republic of China. In other words, he defined the island as a strategic location of value to the U.S. precisely because it is militarily, economically, and politically distinct from China.

The official also talked of “vital US interests,” the typical lexicon used to justify war.

What would combat with China mean? Five years ago, before noteworthy improvements in the Chinese armed forces, the Rand Corporation warned:

War between the United States and China could be so ruinous for both countries, for East Asia, and for the world that it might seem unthinkable. Yet it is not: China and the United States are at loggerheads over several regional disputes that could lead to military confrontation or even violence between them. Both countries have large concentrations of military forces operating in close proximity. If an incident occurred or a crisis overheated, both have an incentive to strike enemy forces before being struck by them. And if hostilities erupted, both have ample forces, technology, industrial might, and personnel to fight across vast expanses of land, sea, air, space, and cyberspace.

And the odds have shifted in the wrong direction over the last five years. Washington is at serious risk of losing a war that would be nothing like Afghanistan or Iraq and with the possibility of escalating to nuclear weapons. There may be answers to overcome the challenge of projecting power at such distance—the fight would be thousands of miles from America, only hundreds from China—but none are cheap or easy.

Talk also has revived about possible conflict with Iran. President Donald Trump’s “maximum pressure” policy turned into a disaster, pushing Iran closer to developing a nuclear capacity, if not nuclear weapons, as well as encouraging Tehran to increase its disruptive activities in the Persian Gulf. Now negotiations over returning to the nuclear deal have stalled. The new, hardline Islamist government is following the Trump administration in attempting to win additional concessions by threatening to walk away, especially given concern that America’s return to the Joint Comprehensive Plan of Action might not last beyond January 2025. Tehran appears to want a deal but is prepared to walk away in the belief that it can survive continued sanctions.

Secretary of State Antony Blinken attempted to pressure Iran by indicating that the administration was “prepared to turn to other options,” the standard euphemism for military action. An unnamed administration official warned: “There are a cascading set of consequences for all of this coming undone. I just don’t see how this comes to a happy conclusion.” Last month General Kenneth McKenzie, commanders of United States Central Command, contended that Tehran is “very close” to a nuclear weapon, though even Israeli security officials affirm much time and effort remain to actually create a nuclear bomb, let alone a usable arsenal. Added McKenzie: “The diplomats are in the lead on this, but Central Command always has a variety of plans that we could execute, if directed.” The administration reportedly is considering everything from sabotage operations to military strikes against Iranian nuclear sites.

Such actions would not likely turn out well. Tehran responded violently to the Trump administration’s reimposition of sanctions and assassination of Quds Force commander Qasem Soleimani. Iran continued to intervene militarily throughout the region, interrupted Gulf oil traffic, wrecked Saudi oil facilities, launched missile attacks against U.S. bases in Iraq, and supported Iraqi militias that attacked the same facilities, as well as the U.S. embassy. That would be but a foretaste of a broader war.

The United States would win any conflict in a conventional sense, but the cost would be high—to Iranian civilians, Middle Eastern peoples, and the United States. Ilan Goldenberg of the Center for a New American Security warned of an admittedly worst-case scenario of unconventional warfare, proxy attacks, spreading conflict, Israeli intervention, internal collapse, revived dictatorship, and continued nuclear development. His sobering conclusion: “Even short of such worst-case scenarios, any war with Iran would tie down the United States in yet another Middle Eastern conflict for years to come. The war and its aftermath would likely cost hundreds of billions of dollars and hobble … future U.S. presidents. Such a commitment would mean the end of the United States’ purported shift to great-power competition with Russia and China.”

Now add the Korean peninsula. The Democratic People’s Republic of Korea (DPRK) is much more dangerous than Iran. Although significantly smaller than China and Russia, the DPRK is well-armed and positioned for war.

Traditionally one of the most dangerous of America’s commitments, the peninsula has become much more so with the North’s acquisition of nuclear weapons. Although Pyongyang’s conventional ground forces are decrepit, they are numerous and, as was evident seven decades ago, the terrain is difficult. North Korean artillery and missiles could do enormous damage to Seoul, unfortunately, situated so close to the border.