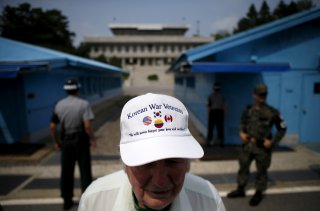 A lot must go right to end the Korean War by 2025. The first consideration is the nature of the North Korean regime. Its leaders seem to leave office only by coffin. A coup is quite unlikely; voluntary abdication is even less likely.

The Korean Armistice Agreement was signed on 27 July 1953 by representatives of the Korean People’s Army, the Chinese People’s Army, and U.S. Army Lieutenant General William Harrison Jr. representing the United Nations Command. Presumably, any peace treaty would require the agreement of all signatories. The United Nations and the United States would have to ensure the agreement of the Republic of Korea. Japan and Russia would have opinions to take into consideration as well.

The armistice is at best imperfect and has seen bloody provocations by North Korea against South Korea, the United States, and even Malaysia: North Korea employed a powerful nerve agent, VX, at the Kuala Lumpur Airport in order to settle a family dispute. To be clear, this was deployment and employment of a weapon of mass destruction. Japanese citizens have been kidnapped by North Korea to teach language skills and perform other duties. North Korean infiltrators have been caught trying to enter Japan, but how many were not caught? Otto Warmbier’s comatose return to the United States is only the most recent incident involving the U.S..

Over the years, South Korea has moved from military dictatorship to vigorous, prosperous democracy. North Korea, on the other hand, remains an exemplar of the “socialist paradise” reality. Human Rights Watch and the Committee on Human Rights in North Korea document North Korea’s continuing, egregious abuse of their own people. Bereft of any valid industry, North Korea maintains a global criminal network to maintain the Kim family and its core supporters in a comfortable lifestyle.

Beyond their growing nuclear arsenal, North Korea maintains massive conventional forces capable of initiating conflict from a standing start. The Army numbers over 950,000, 70% of which are poised within 100km of the border. Both cannon artillery, from short range in the Kaesong Heights overlooking Seoul, and rocket artillery, from longer range dispersed and hidden deeper in the country, can rain fire upon the capital. The infantry may no longer be the threat to march south that it once was, due to nutritional issues, but placed in the defense to protect the artillery which would attack Seoul and other places, it must nonetheless be accounted for. The Air Force, for its part, is about 110,000 strong, and the Navy, with proven submarine and mine warfare capability, is poised to attack all along the South Korean coastline, as well as into the Sea of Japan and the East China Sea.

The nature of the ruler is important. What could possibly be offered to Kim—his family and his inner circle—by the United Nations, the United States, and the Republic of Korea which would be better than what they have now? He must know, with the documented human rights abuse history of his clan, that he would be the leading candidate for an appearance at the International Criminal Court in The Hague. If he does go to The Hague, then who protects the North Korean leadership from vengeful North Koreans?

Or does Kim remain in office after peace is declared? If there is no regime change, then what does the North-South relationship look like? What does the border look like? How is the threat to Seoul and other metropolitan areas resolved? Assuming that could be solved, could Kim count on successive U.S. administrations honoring an agreement made by a previous administration? We have recent history to guide us on that. South Korea also has a history of reversing course with changes in the ruling party.

Does an end to the Korean War mean a North Korea without nuclear weapons? If not, then does proliferation spread to Japan and South Korea? Would that be an improvement in regional security? If North Korea gives up its nuclear arsenal, who would be responsible for the economic rehabilitation of North Korea? Given the armament of China and Russia, to name just two, would the United States be willing to provide extended deterrence to North Korea?

For most of the 70+ years of the Democratic People’s Republic of Korea, it has enjoyed the interior position among Russia, China, Japan, South Korea, and even the United States through our military presence in the region. All wished the problem gone; none wished to force the solution, out of respect for the collateral damage that would descend on all. Not much has changed. Tell me how this ends?