A Coup in Seoul? South Korea’s Military Has Bigger Problems 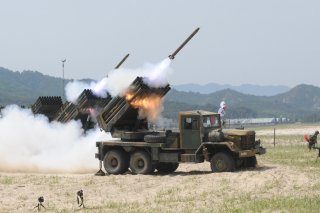 Seung-Whan Choi’s recent article on South Korean President Yoon Suk-yeol in The National Interest invited a variety of responses from Korean media; a liberal media outlet reported the article as a signal that the United States is becoming increasingly concerned by Yoon’s unpopularity, while the most circulated South Korean newspaper described Choi as “a citizen reporter” who frequently contributes to a left-leaning South Korean internet outlet to criticize the Yoon administration.

In his article, Choi seems to have made a few factual errors; the ophthalmologist who was described as President Yoon’s high school friend—actually an elementary school friend—did not examine Yoon’s eyes during the draft period, but when the previous President Moon Jae-in appointed Yoon as prosecutor-general in 2019. While President Yoon was under scrutiny for not convening a National Security Council meeting upon North Korea’s first provocation under his watch, his alleged drinking in question happened a day after the provocation, and there is no evidence so far to suggest he did not convene the meeting because he was drunk. Further, it is not clear how the current minister of national defense “politicized” the military by replacing generals with his close friends; all of the minister’s “friends,”—members of the fortieth class of the Korea Military Academy (KMA) and equivalents—had all retired from military by 2019; a Korean article that was shared in the Choi’s article actually suggests appointment and promotion decisions were delegated to the chiefs of staff in each branch to best reflect expertise in the field. Earlier appointments of four-star generals were also reportedly carried out by the minister without any intervention from the president’s office, possibly deviating from past administrations’ tradition of directly intervening in appointments of officers, if true.

Probably the most thought-provoking argument within the article is how the unpopular South Korean government under President Yoon could be toppled by, not just by its people, but by its military. Choi assesses that three factors—President Yoon potentially being a draft dodger, the president’s office’s hasty takeover of a Minister of National Defense building, and the appointment of a retired three-star general as the defense minister instead of a four-star general—have strained civil-military relations, and the military may launch a coup against Yoon. The three reasons, with the exception of the presidential move, however, actually received a lukewarm response from the military.

The fact that Yoon was exempt from mandatory military service actually did not receive much attention in the presidential election, which was filled with a myriad of other scandals, potentially due to the fact Lee Jae-Myung, the Democratic Party’s presidential candidate, was also exempt from military service due to medical reasons. While military service, especially allegations related to special treatment and exemptions of key politicians’ sons, are likely to remain important for voters, it is increasingly losing its status and is no longer one of the most important factors that determine a president in close elections. In fact, the military already had two presidents in the twenty-first century who were exempt from the military: former President Lee Myung-bak (with a medical exemption) and former President Park Geun-hye (as a woman who was not required to serve). The military did not react to the fact that they lacked military service, and there is no indication that it is about to change. As a presidential candidate, Yoon received endorsements from 1,300 out of 2,200 living retired generals, which included twelve former defense ministers, thirty-four former chiefs of staff, and seventy-four retired four-star generals. If the military saw his exemption as a problem, it would have been very unlikely for retired ranking officers to announce endorsements publicly.

Compared to his military exemption, Yoon’s decision to move the Ministry of National Defense had far more significance for the military, and potential negative consequences on operational readiness should definitely worry officers. The move directly impacted about 1,000 employees and officers working in the building and potentially demoralized civil servants and officers who saw working in the ministry as one of few ways to work in Seoul. It is, however, unclear whether the building eviction alone would warrant the military to revolt against the democratically elected president. When eleven retired chairmen of the Joint Chiefs of Staff (CJCS)—the highest rank within the South Korean military—expressed concerns over the move’s negative impacts and urged Yoon to not act hastily on the matter, sixty-four retired four-star generals and admirals, who claimed to be supported by 1,000 other retired generals, also issued a statement that stated that the move would not create a security vacuum, and the military’s joint command and control system would remain the same for operational readiness; the retired CJCS later announced that they did not want their statement to be politicized, with some stating they will cooperate with the move and even criticizing the outgoing Moon administration for its “mismanagement of national security” and politicizing the eviction. The statements by the retired generals, of course, should not be interpreted as the prevailing view shared by active-duty officers who are legally barred from expressing their political views, but it is a helpful indicator of what officers might be thinking. The move also has no direct impact on the vast majority of conscripts who are not serving in Seoul, and it would be almost impossible to convince conscripts and non-commissioned officers to rise against the government together.

Perhaps the weakest argument overall is to state many soldiers were infuriated when President Yoon appointed a retired lieutenant general (three-star general) instead of a four-star general. It is questionable whether National Defense Minister Lee Jong-sup, a former vice chairman of the Joint Chiefs of Staff (JCS), former commander of the VII Mobile Corps, and former head of the JCS’ New Combined Defense Transformation Task Force overseeing planned operational control transfer between the United States and the South, can be viewed as not having proper military knowledge or experience. In fact, the National Defense Committee of the National Assembly with an opposition Democratic Party majority unanimously passed a report after the hearings on Minister Lee to green-light his nomination, citing that Lee “has ample experiences related to military operations and defense policy, well as professional and strategic leadership, by working in key posts in 39 years of his military career.” If Lee being a retired lieutenant general rather than a four-star general was problematic, it would have been flagged and opposed like other appointments deemed to be problematic by Yoon’s opposition. And it is hard to think that conscripts, most of whom will finish their military services without directly seeing a single four-star general or a lieutenant general, would care if a minister is a four-star general or not.

In fact, Lee is not the first retired lieutenant general to be appointed as a defense minister; there were four non-four-star generals who have served as defense ministers since 1988, which included three lieutenant generals and one major general. The latest such appointment was the appointment of retired Vice Admiral Yoon Kwang-ung by former President Roh Moo-hyun in 2004; his appointment was taken to be far more exceptional not just because he was a three-star admiral, but he was from the navy when the ministerial post was historically predominantly occupied by army generals who graduated from the Korean Military Academy. President Roh, who actively pushed for wartime operational control transfer (OPCON), also contemplated appointing a civilian as a defense minister and openly criticized former defense ministers and generals for opposing the transfer. It is worth noting that Roh’s open criticism of the former defense officials also coincided with the time when his approval rating reached 5.7 percent in December 2006, but the military, which included officers who directly experienced a coup in 1979 as young officers, took no action and carried on as it is intended.

The argument that Minister Lee was favored because he joined President Yoon’s campaign also seems to be weak. The Yoon campaign had a number of retired four-star generals, including chiefs of staff of the army, navy, and air force who were appointed by former President Moon. And while previous administrations preferred to appoint recently retired officers as defense minister, there were exceptions. Retired Admiral Song Young-Moo, who was President Moon’s first defense minister appointment, had been retired for almost a decade before he was appointed as a defense minister. His appointment was an anomaly not just because he was originally from the navy, but also because he was a member of a political party prior to the appointment.

And even if the military as a whole somehow becomes infuriated enough to launch a coup, the modern structure of South Korean society, military, and the government makes any coup almost definitely impossible. South Korea’s robust telecommunications network, multiple flows of information in the internet age, notorious traffic, and soldiers and officers who were born and only grew up in a liberal democracy all point to how a coup in South Korea would not be feasible.

Previous administrations’ firm grasp on appointments of generals also contributed to alleviating the possibility of a coup in South Korea. After the swift and successful purge of a clique of army officers in 1993, the military remained largely answerable and submissive to what is often described as an “imperial presidency.” Its firm control, however, also had negative consequences. Officers have been constantly worried about the ramifications of their posts and connections in a single-term, five-year presidency, during which previous administrations acted to firmly control military officers.