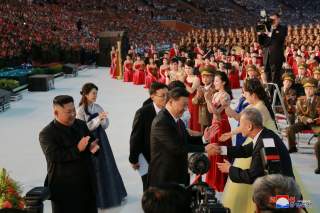 While Chinese president Xi Jinping may not have been physically present at the DMZ summit on June 30, he certainly loomed large over the historic gathering between President Donald Trump and the leaders of the two Koreas. The summit was not a simple photo-op arranged on the whim of a tweet. Instead, it was the culmination of a complex diplomatic process, which included a decisive intervention by Xi ten days earlier and a series of high-stakes meetings at the G20 in Osaka. The Chinese leader’s historic state visit to Pyongyang made it particularly urgent for the United States to act before any further erosion of its sanctions leverage in Korea.

At the demilitarized zone, Trump proposed to North Korean leader Kim Jong-un something big enough to break the stalemate that followed the second U.S.-North Korea summit in Hanoi. Back then in February, both sides had come out saying the ball was in the court of the other. In a major policy speech on April 12, Kim made clear that he was “[not] willing to see . . . the Hanoi summit talks re-enacted” and that he would wait only until the end of the year for the United States to come up with a deal that contains “fair clauses which conform to the interests of both sides.” Right up until the day before Trump’s invitation to the DMZ, North Korean state media was still lambasting the United States for failing to come up with a “proper counterproposal” and “sit[ting] with folded arms like today.”

While Trump got Kim to agree to working-level talks, he could not have done so without climbing down from the maximalist position taken in Hanoi. Back then, Trump’s advisers were so convinced that sanctions put time on the American side that they had him demand that North Korea unilaterally give up all its weapons of mass destruction. The North Koreans were predictably outraged: they had traveled for days only to hear team Trump effectively demand their surrender. Something has happened since then that demonstrated the absurdity of this “all-or-nothing” approach.

Xi’s unprecedented show of support to North Korea made clearer than ever the limits of a sanctions-based policy that would fail to include engagement. He praised the country’s “right direction” in politically resolving the crisis, expressed support for its “rational concerns,” and promised solidarity and friendship “no matter how the international situation changes.” Since China accounts for the quasi-totality of the trade and aid bound North, it can single-handedly make or break the effectivity of the U.S.-led sanctions regime.

China has historically taken a backseat in nuclear talks but has clear conditions for what should happen with its neighbor and military ally. It knows that the nuclear crisis cannot be resolved by sanctions alone but by addressing “the legitimate security concerns of the DPRK” (North Korea). In this China “supports an early end to the state of war on the Korean Peninsula and advocates replacing the temporary armistice with a permanent peace regime.” The two Koreas concur, as evidenced in the Panmunjeom Declaration of April 28, 2018.

The United States is the only relevant party that has yet to clearly agree to all these elements. Trump started to change this when he became the first sitting U.S. president to meet with a North Korean leader on June 12, 2018. The resulting joint statement called for “new U.S.-DPRK relations in accordance with the desire of the peoples of the two countries for peace and prosperity.” Evidently, North Korea will not put its guns down without the assurance that it won’t be harmed.

What distinguishes Trump from most of his predecessors is that he considers China to be an overall greater danger to the United States than North Korea. His National Security Policy designated China a “rival” and “revisionist power” seeking to “shape a world antithetical to U.S. values and interests.” He has made it one of his signature initiatives to wage a trade war on what has long been known as the “world’s factory.” Based on this premise, it was coherent for him to try to settle the dispute with North Korea as fast as possible, to end Washington’s dependence on Beijing in this dangerous dossier.

It is fortunate, then, that China also wants the United States to settle in Korea. It suggests the two superpowers agree that the situation is too explosive to allow any further escalation, let alone get dragged by their alliances into a second war over the Peninsula. A RAND Corporation report estimated back in 2016 that the United States would have had the upper hand in a mainly maritime and purely Sino-American war, but that it would leave both sides devastated and that the gap was rapidly closing.

Trump did not reveal much of what he discussed with Xi in Osaka, except that the two had agreed on a truce in the trade war. It is nevertheless hard to imagine that they would not have addressed Korea, as Trump was heading there right after for the DMZ summit. He only made an indirect reference to it in his closing press conference when he said that “we have countries where we’d lose on defending them, because we defend a tremendous percentage of the world.  And they don’t pay us for it.”

Trump did not reveal either what he promised Kim at the DMZ. We can make an educated guess that it will either be based on the sanctions relief Kim asked for in Hanoi, or on the security guarantees he has been asking for since. Trump said the sanctions would stay on for now but that “at some point during the negotiation, things can happen.”

As for what North Korea would offer, the New York Times suggested that the Trump administration intends to settle for an interim deal that builds on the Hanoi formula. It would consist of freezing the development of the North Korean nuclear arsenal by (1) formalizing North Korea’s self-imposed moratorium in nuclear bomb and long-range missile tests and (2) verifiably halting the production of nuclear material. The difference with Hanoi is that it would not just target the heart of production in Yongbyon, but would extend to other facilities in the country—an indirect way to get Pyongyang to declare all its facilities. The Trump administration has dismissed the report as speculation but the fact that it builds on Hanoi adds realism to it. Pyongyang is nevertheless likely to resist declaring all its facilities, as this would make it substantially more vulnerable to so-called “bloody nose” strikes by the United States.

Whatever the path, an interim deal could be a major step toward a peace regime that is finally resolving the Korean question, one that should benefit the interests of the two Koreas, the United States, and China.