Did North Korea Just Signal It Wants to Talk? 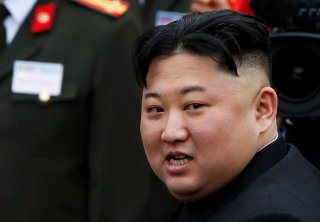 The day couldn’t have been juxtaposed any more starkly. On one side, you had Washington, D.C. in chaos, with pro-Trump mobs ascending the stairs of the Capitol Building and desecrating the very essence of American democracy. On the other, you had North Korean leader Kim Jong-un holding court over thousands of delegates at the Workers’ Party Congress, pouring over documents and presiding over a boring, orderly bureaucratic process.

The first sessions of the party congress have seen very few surprises and even less excitement. North Korea watchers in the United States and South Korea had an overriding suspicion that Kim Jong-un would focus the bulk of the work on domestic issues rather than foreign relations, a testament to how sluggish Pyongyang’s financial situation has become over the last twelve months. Kim’s decision to close its land border with China—Pyongyang’s largest trading partner by far—to seal his country from the coronavirus has brought predictable hemorrhages to North Korea’s economy unlike any the country has seen since the famine-stricken days of the mid-1990s. Right now, the Kim regime is too busy trying to concoct its own medicine to save its country from complete destitution—if relations with the United States and South Korea are a priority, they are a second-tiered one at this particular time.

Those of us in the West who don’t have special access to the North Korean political hierarchy are forced to read the bureaucratic, long-winded work statements published by the Korean Central News Agency and pontificate to the best of our ability what the year ahead has in store. Right now, Pyongyang isn’t providing us with much material. A reference to boosting North Korea’s military here, a pledge to expand the inter-Korean relationship there, and we are left to stew about Kim’s intentions for the new year. The latest blurb that has caused ears to perk up was the congress’s quick reference to its neighbors in the south: “The report studied the issue of affairs with south Korea as required by the prevailing situation and the changed times and declared the general orientation and the policy stand of our Party for comprehensively expanding and developing the external relations.”

Taking the language at face-value, the Kim regime appears to be preparing itself for a more conciliatory policy toward Seoul. From where Pyongyang stands right now, such a change in direction would make a good deal of sense. With the Biden administration coming into power in two weeks and pledging a more traditional, bottom-up diplomatic track, Kim Jong-un is likely looking at the new team in Washington and anticipating a rough, slow slog ahead. Kim personal relationship with Donald Trump at least kept the two talking through copious letter writing and the occasional summit. Kim won’t be able to bank on a direct line of communication with incoming President Joe Biden, who is more likely to call Kim a “thug” and criminal than entertain a meeting with him on the front end. All of this is to say that South Korea, with its constant desire to serve as a mediator between Washington and Pyongyang and explore mechanisms to bolster inter-Korean relations, may just have become far more important in this entire saga.

South Korean President Moon Jae-in certainly hopes so. In the closing stretch of his five-year term, Moon would like nothing more than to realize his lifetime dream of comprehensive peace on the Korean Peninsula. Returning to private life without this accomplishing this lofty objective would be a bitter pill for Moon to swallow. Indeed, despite numerous, painful setbacks along the way, he remains as convinced about the nobility of inter-Korean relations as he was on his first day. On January 7, Moon commented that he will strive for this goal until his last day on the job: “If conditions allow, (my administration) will make efforts to the last for the denuclearization of the Korean Peninsula, permanent peace and development of inter-Korean relations.”

With a new U.S. administration set to take over, Seoul’s own role may very well increase as Pyongyang searches for a less controversial way of getting Washington’s attention other than the traditional ballistic missile launch. The eyes of the South Korean Foreign Ministry remain locked on the Workers’ Party Congress for any positive sign from the North, however small it seems in the abstract. A simple question is now being asked again and again in South Korean diplomatic circles: will 2021 be more like 2018 or 2020?

We can guess as to what the answer may be. But as is usually the case with the North, there’s no use for commentators to make our own tea leaves. The answer will ultimately depend on whether Kim Jong-un believes a detente is in his own interest, what the Biden administration’s North Korea policy will actually entail and how involved Moon Jae-in is willing to be in making a detente happen.