Did North Korean Soldiers Die of the Coronavirus? 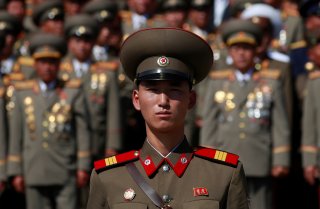 There haven’t been many solid reports out of North Korea about its potential coronavirus outbreaks until this week. A report has surfaced about a group of North Korean soldiers that are said to have died from the disease.

“North Korean military authorities are in shock after mass deaths occurred at hospitals for soldiers suspected of having COVID-19,” according to Daily NK. The report cited multiple military sources in North Korea.

North Korean leader Kim Jong-un, meanwhile, is reportedly “furious” about the deaths, which are said to be the biggest reason the regime announced stronger quarantine measures at last week’s politburo meeting.

Daily NK cited a military source, in North Korea’s Gangwon Province, claiming that forty-five soldiers died in July and August, at a temporary ward in that region.

“The ward was closed and the patients moved to another makeshift facility after the total was reported to the Army Health Bureau under the title of ‘Death Statistics for the Operational and Combat Political Training Period of 2020-2021,’” the source told Daily NK.

A different source, in Nampo, told the site that more deaths were reported at a different facility, also this summer.

“The hospital is in a chaotic state after being reprimanded,” the source said.

The deaths were the highest, Daily NK’s sources said, in “front-line corps,” followed by those along the border with China, followed by the Second and Third Corps.

“[North Korean military authorities] seem quite shocked that there were this many deaths, despite putting the strongest quarantine measures in place,” that source told the Daily NK. “The Supreme Leader was also very angry, and they’re saying that the only thing to do is call loudly for more intensified quarantine efforts.”

The report also found that the military, after a year of converting single floors of other facilities into coronavirus units, had begun using other, “clumsy” measures, including “building temporary makeshift facilities deep in the mountains, far from the units themselves.” However, those facilities do not appear to be doing much to treat the patients.

There has also, per the report, been an active cover-up of all of this.

“Only after being rebuked by the ministry did military units start filing proper reports. Word then started making its way to some military families as well,” the Daily NK reported. “According to the source, families worry that the military ‘cannot guarantee another mass death won’t happen when soldiers have to live together in a barracks.’”