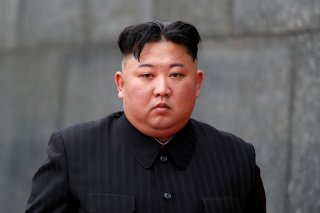 Since the start of the pandemic, North Korea has continued to claim that it has zero cases of coronavirus, much to the disbelief of the worldwide medical and diplomatic establishments.

Some reports earlier this month indicated that North Korea appears not to have a strategy for mitigating the virus. The Voice of America has reported that the North Korean regime “has done little to advance the process to receive vaccines from COVAX,” which is an international organization for distributing coronavirus vaccines.

North Korea was scheduled to receive nearly two million doses of the AstraZeneca vaccine, although negotiations stalled at some point.

“News of countries vaccinating their people or life returning to normal is rarely, if ever, transmitted within North Korea, perhaps over fears that it might trigger resentment against the regime for its failure to secure shots,” Pratik Jakhar of BBC Monitoring wrote in an op-ed published by Foreign Policy this month. “In contrast, the propaganda apparatus has been unusually quick to report on cases rising abroad and the spread of COVID-19 variants.”

The North Korean regime has told the World Health Organization (WHO)    that they still have no cases, following the testing of 693 people. That brings the total of those tested in North Korea to 35,947, according to NK News.

“North Koreans are well aware that when making contact with family or friends living in South Korea, there is always a chance that they are being wiretapped,” a North Korean pharmacist told Amnesty International. “So phone calls and letters are usually made under the premise that someone might be listening to or reading their conversations. They will never say a word related to COVID-19, as this can cost their lives.”

Last week, the president of South Korea said in a speech that he hopes to cooperate with North Korea on fighting the pandemic. This includes inviting North Korea into the Northeast Asia Cooperation Initiative for Infectious Disease Control and Public Health. That organization currently consists of South Korea, Japan, China, Russia, Mongolia, and the United States. Its goals include “information sharing, shared stockpiling of medical supplies and joint training of COVID-19 response personnel.”

“It is clear that the COVID-19 threat is not temporary, which makes [the initiative] even more important,” Moon Jae-in said in the speech.

“For us, division is the greatest obstacle to our growth and prosperity and a tenacious barrier that obstructs permanent peace,” the South Korean president added. “We can also remove this barrier.”