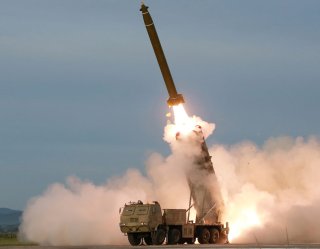 Washington and Seoul are busy urging Beijing to prevent a seventh North Korean nuclear test. There’s been a flurry of meetings and statements, including U.S. president Joe Biden and South Korean president Yoon Suk-yeol’s requests for Chinese leader Xi Jinping to apply pressure on Pyongyang during face-to-face meetings in Bali.

There’s an assumption behind all of this activity: Beijing doesn’t actually want North Korea to have nuclear weapons. It is argued that if the United States and its allies can just find the right mix of carrots, sticks, and rhetorical framing, they can nudge Beijing toward acting in accordance with its “own best interests.” Opponents of this approach generally agree that China would roll back Pyongyang’s nuclear program if it could, but that it’s just too costly for Beijing for the United States to shift its calculus.

But is this assumption sound? It is now nearly thirty years since the first nuclear crisis with North Korea, with Pyongyang’s nuclear program stretching back decades before that. The North now has around forty nuclear warheads and a missile that can reach the American mainland. Sure, it’s possible that across all those decades, Beijing was at the precipice of deciding to halt the program only to never do so because the cost-benefit analysis wasn’t right. However, given the various changes in leadership on all sides and the transformations within China and in the international system, it certainly shouldn’t be taken for granted.

The fact that it is taken as a given that China opposes North Korea’s nuclear arsenal says more about Washington and Seoul than Beijing. The reality is that, short of Xi calling a press conference to declare he endorses the North’s nukes, the consensus will stumble on, zombie-like. The assumption that China opposes North Korea’s nuclear weapons program underpins much of Washington’s and Seoul’s foreign policy approaches, and it would be too disruptive to overturn it simply because it’s dubious.

Still, it’s entirely plausible that rather than opposing the North’s nuclear program, China actually supports it. I will put aside evidence on both sides of the ledger, as it’s mixed and will always be inconclusive until we have access to internal archives. Instead, analysts should consider the interests of North Korea and China, which are much more aligned regarding nuclear weapons than most assume.

First, there is a broad expert consensus that China fears that South Korea and Japan will develop their own nuclear weapons in response to North Korea’s arsenal. But for there to be daylight between them on this matter, North Korea must not care whether or not the South and Japan go nuclear. That is unlikely, given that North Korea is much smaller than China and a nuclear attack against North Korea would be proportionally worse. It also has far fewer resources to spend on a retaliatory deterrent.

More probable is that both China and North Korea agree that South Korea and/or Japan acquiring nuclear weapons would be bad, but that the risk is manageable. They would be right. It is the end of 2022, North Korea has a growing nuclear arsenal, and, at least as far as we know, Japan and South Korea have not even commenced nuclear programs. That may change in the future, or it may not. But no one should expect Pyongyang to give its nuclear weapons up now after having come so far just because there is an indeterminate future risk. And given China’s far greater power, there is no reason to think it is more skittish about the future.

So why the expert consensus? One simple explanation is Chinese disinformation. North Korea is busy developing the weapons—using some Chinese parts and technology—as China vociferously opposes South Korean and Japanese nuclearization and holds out the possibility that it will pressure the North into denuclearizing.

A good illustration of this dynamic can be found in the writing of Jae Ho Chung, the current South Korean ambassador to China and a former professor:

If China had mostly sat on the fence during the first crisis [in 1993], it was mainly because Beijing had not been convinced that Pyongyang had then possessed the pertinent technologies. Not surprisingly, China even vetoed a UN condemnation of North Korea's nuclear program…[In 2002] China's calculus and response appeared somewhat different…it did not call for non-interference by other powers. Instead, Beijing took the position that North Korea's nuclear program had become an international concern.

We now know that what Chung saw as China's new "constructive role" in managing the nuclear problem did not prevent the North from attaining the formidable capabilities it has today. We should not assume, as Chung did, that Pyongyang is offended when it is rebuked by China at the United Nations. Rather, we should also consider the possibility that North Korea is pleased, as Beijing’s condemnations reduce the chance that Japan and South Korea will go nuclear.

A second widespread assumption is that China fears the instability and heightened risk of war that North Korea brings to the region. This belief was reflected in U.S. special representative for North Korea Sung Kim’s message to Beijing that “maintaining peace and stability on the Korean Peninsula is an important shared goal.” Again, this assumes that North Korea is more nonchalant. This seems unlikely, since Pyongyang has even more to lose than China if war breaks out, being smaller, weaker, and the primary target. It is likely not a coincidence that whenever the North’s provocations result in an allied show of strength, China warns that the use of force is unacceptable. This serves both China’s and North Korea’s interests in deterring the United States from using force, while the North still retains its nuclear weapons. Again, it is not irrational for Beijing and Pyongyang to view the risk of conflict as tolerable. The United States hasn’t attacked North Korea in decades; it would be strange to assume the threat to the North is higher now that it also has a nuclear deterrent. Similarly, China is likely also more confident that it can, together with Pyongyang, deter the United States from using force.

But what about the impact of “instability” on China’s development? After decades of North Korean-driven crises, you won’t find any noticeable impact on China’s economy. With China engaging in military exercises to warn the United States away from Taiwan, it is farfetched to assume that it prioritizes maintaining a stable international environment, at least in a straightforward “tension-is-bad” way.

Still, one could argue that the North sees more utility in its possession of nuclear weapons than China does, so it is more willing to face the risks and pay the associated price. But again, it doesn’t make sense to simply assume that. We are told that China is reluctant to join U.S.-led efforts against the North’s nuclear program because it fears a North Korean collapse. According to this view, China worries about a flood of refugees and the loss of an important buffer against the U.S. threat. But obviously, North Korea has an even stronger interest in avoiding its own collapse. And doesn’t Pyongyang see nuclear weapons as a means to ensure regime security? Clearly, then, we shouldn’t simply assume that Beijing doesn’t share Pyongyang’s view that nuclear weapons strengthen the regime.

We should also not dismiss the possibility that the weapons are not for defense, but for offense—to pressure the United States off the peninsula so that unification with the South can happen on the North’s terms. After all, the regime itself says the weapons are a “means for securing peaceful unification and the survival of the race.” If so, there is no reason to assume that China opposes North Korea’s nuclear arsenal. After all, the bigger the strategic buffer, the better, and China’s overall strategic position would improve if U.S. forces left the peninsula and South Korea exited the U.S. alliance system. While it may seem far-fetched that Pyongyang would actually be able to leverage its nuclear weapons to secure a U.S. withdrawal and unification, it’s certainly possible. And nobody—including Beijing—has a better idea of how to accomplish those goals.

We don’t know what Beijing really thinks about North Korea’s nuclear weapons. But there’s nothing so different between the two countries’ interests that we should simply assume China opposes the North’s nukes. On the contrary, given that North Korea has already developed impressive capabilities without China taking effective action to prevent it, it is safer to assume that Beijing supports Pyongyang’s nuclear weapons program.