Does a Trump Impeachment Mean the End of Negotiations with North Korea? 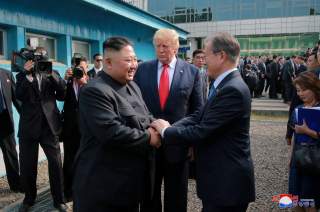 It seems like only yesterday when President Donald Trump first met with North Korea’s Kim Jong-un. To the shock of most foreign-policy analysts, the president decided on engagement at warp speed. Despite many obvious barriers to denuclearization, the bilateral summit raised hopes of a more stable and peaceful future for the Korean Peninsula.

Since then, hopes of agreement have faded. The Hanoi summit collapsed disastrously, the North withdrew from diplomatic contacts around the globe, the administration insisted on complete denuclearization in about a year, and the North threatened to change course if diplomacy failed. South-North reconciliation also went in reverse, with bilateral projects barred by U.S. sanctions and Kim reportedly blaming Moon Jae-in for misjudging the Trump administration’s response to North Korea’s offer to close Yongbyon in return for sanctions relief.

Rumors of working-level talks between the two governments have not proven to be true. September has passed and no talks are planned. The Democratic People’s Republic of Korea previously established an end-of-year deadline for an agreement. That might be a negotiating ploy, but the administration’s increasing political preoccupations make substantive progress ever more difficult.

Moreover, the president might be losing interest, since the quick agreement he apparently expected proved unattainable. Before the first summit he talked as if he expected Kim to arrive with his nuclear arsenal in hand, ready to load onto Air Force One. After Hanoi administration officials reaffirmed their objective of achieving complete denuclearization in about a year. Today, not a single administration official seems to view that as a realistic goal.

Worse, from Trump’s standpoint, personal diplomacy appears to have run its course. Despite continued affirmation of his “friendship” with Kim and seeming enthusiasm for the June “handshake summit,” nothing more has come of the president’s efforts. Although a third summit has been proposed, such a meeting is highly unlikely without a guarantee of success, which is impossible without intensive negotiations at the working level.

Equally problematic, the DPRK’s supreme leader may have decided that reaching a deal with Trump is impossible or, if possible, would have little value. In his 2019 New Year’s talk he indicated that his regime might abandon conciliation. “We even might find ourselves in a situation where we have no other choice but to find a new way,” he said. In August, the official Rodong Sinmun warned that joint U.S.-South Korea military exercises could “block the improvement of DPRK-U.S. relations and lead to the reconsideration of critical steps” previously taken. Continuing missile tests both offered negotiating leverage and enhanced the North’s military capabilities.

More ominously, last week the same paper called for strengthening national defense, making security the country’s “number one” priority. This isn’t a return to the “military first” policy championed by Kim’s father, but it does appear to reverse Kim’s New Year’s 2018 declaration that security objectives had been achieved. “Last year was the accomplishment of the great, historic cause of perfecting the national nuclear forces,” he said during his speech. This success, he added, had “opened up bright prospects for the building of a prosperous country.” He appears to place less emphasis on his personal relationship with America’s president.

In fact, the president’s reliability as a negotiating partner was never good. On trade, he abandoned pacts both negotiated and ratified. He filled his administration with officials, such as former national security adviser John Bolton, who actively undermined his professed international objectives. President Trump’s campaign promises regarding foreign policy have gone largely unfulfilled: improving relations with Russia, withdrawing armed forces from Afghanistan, halting “endless wars” in the Middle East. He voided the international Iranian nuclear accord, which contained the most detailed enforcement provisions of any disarmament program.

His uncertain reelection prospects further hinder negotiations. In the past, one would expect an agreement with one president to be respected by his or her successors. However, this president rejected numerous accords negotiated by his predecessors and even ratified by previous bodies of Congress. Nor was he alone. The Obama administration’s intervention in Libya was an implicit repudiation of President George W. Bush’s agreement with dictator Muammar el-Qaddafi, who abandoned his missile and nuclear programs in return for acceptance by Washington and Brussels. It would surprise no one if Democrats, who have sharply criticized the president’s willingness to deal with Kim alongside more hawkish Republicans, who long-championed confrontation with the DPRK, rejected any agreement negotiated by Trump.

The threat of impeachment has further undermined the president’s value as a negotiating partner. Whatever its result, the process will divert administration attention and resources from policy. Moreover, it will drain the Trump presidency of much of its remaining credibility political capital. In the unlikely result that he is removed—the chances still appear remote, though frustration with the president’s many abuses and missteps is high among Republican senators—his successors may be as enthusiastic about eliminating his legacy as he was regarding Barack Obama’s. If he survives impeachment, especially if there is public erosion of heretofore united partisan support, but loses in November 2020, then Democrats would be no less determined to chart a new course.

Of course, he still could win reelection. The 1998 impeachment of President Bill Clinton backfired politically, costing the GOP House seats (the best measure of the political impact since he could not run for reelection). An unsuccessful impeachment campaign could galvanize President Trump’s supporters and yield another narrow victory over an unattractive Democratic nominee. Even then, however, his presidency would be badly damaged. Negotiating and implementing a complex denuclearization accord, and implementing it amid ideological and partisan criticism, would become significantly more difficult.

Perhaps more important is Kim’s perception of the president’s reliability. It is hard to know what the supreme leader thinks of a democratically-elected president, let alone this democratically-elected president. However, Kim’s seeming loss of patience with Washington, perhaps accentuated by domestic pressures—he obviously dominates the DPRK’s political system but is not free to disregard the opinion of party and especially military elites—already undermined the potential for an agreement.

Now Kim must consider the possibility that the president could be convicted and removed or acquitted yet defeated in 2020. The greater the ongoing political damage to the president’s political position, the lower the chances of a successful negotiation. Why invest in what appeared to be diminishing chances of reaching an accord if it seemed unlikely to survive future political vicissitudes?

The future is unknown, but the unique opportunity created by Trump’s willingness to meet Kim is slipping away. Full denuclearization was always unlikely, but other worthwhile deals seemed potentially within reach. Now that opportunity is fast disappearing. Washington’s burgeoning battle over impeachment makes it even less likely than before.