The Hanoi Summit – We Asked John Dale Grover What Happens Next in U.S.-North Korea Relations 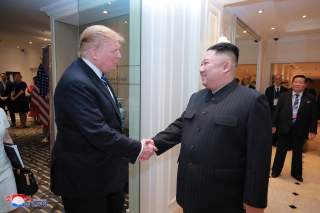 The summit in Hanoi between America and North Kora didn’t have to go the way it did. Political leaders and pundits can get wrapped up in history and in assuming that the way things have always gone is the way they always will. But the problem is that there is always a choice. Diplomacy with North Korea is not always and forever preordained to failure. To assume otherwise is to prematurely close the door to a future in which the North Korean nuclear threat is managed instead of ignored or made worse.

I have written many times that North Korean leader Kim Jong-un will never give up his nuclear weapons. He knows that they are the only thing that really causes any U.S. president to pause when considering military action against him. No matter how hated Kim is or what he has done, he wants to survive and he knows that his nuclear weapons will protect him. Why risk the death of hundreds of thousands or millions just to bring him down? Pyongyang knows Washington and Seoul would not consider the cost worth it.

Yet diplomacy has and always will remain key. That is the case even now despite the disappointment over the lack of progress at Hanoi. The door to diplomacy remains open, and that is the most important thing. Consider that U.S. president Donald Trump could have stormed out of the meeting and tweeted once again about “fire and fury.” Imagine what would have happened if Kim had immediately ordered a nuclear test or missile launch. Both leaders could have acted even tougher in order to show up their critics at home and to attempt to intimidate each other.

That could still happen, and it could prove at best dangerous and at worst disastrous. This is because even though both countries have nuclear weapons and would not want to use them, such weapons are not immune to humans being humans. Miscalculations, miscommunication, an accident or mistake, and passions of rage are all factors that could increase the likelihood of an escalation cycle that gets out-of-hand.

What is most important now, as always, is how both countries manage their relationship and attempt to improve things for the sake of peace rather than smaller objectives like denuclearization or sanctions relief. No doubt there are incremental deals to be made if both sides really want them. But zeroing in on just these sub-objectives misses the point. Peace is the point. Deterrence is what scares both countries into keeping it, but communication, diplomacy, and having de-escalation plans in place before a crisis hits are what ensures deterrence never fails. That is what both countries should be thinking about and pursuing after Hanoi.

John Dale Grover is an assistant managing editor at The National Interest. He is also a fellow at Defense Priorities and a writer with Young Voices. His views are his own. Follow him on Twitter @JohnDaleGrover.