Progress in North Korea—but We've Seen This Before 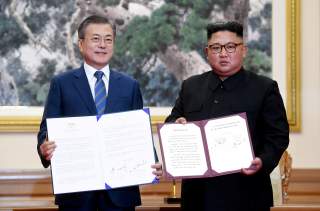 South Korean president Moon Jae-in and North Korean leader Kim Jong-un broke new diplomatic ground yet again with their third summit. Under the theme “Peace, A New Future,” both leaders announced a new Pyongyang Joint Declaration on September 18, 2018. President Trump happily tweeted on September 19 “North Korea recommits to denuclearization—we’ve come a long way,” and U.S. Secretary of State Pompeo said he hopes for North Korean denuclearization by January 2021. However, while progress is being made, caution is still warranted. There are three critical takeaways from this summit; first, sanctions are becoming harder to enforce; second, more verifiable and irreversible movement on denuclearization is needed; and third, negotiations take time.

Moon has declared that both sides will reduce the units they have stationed along the demilitarized zone and will use a new joint-liaison center to maintain communications. Also, both Koreas announced plans to compete as one team at the 2020 Tokyo Olympics and to bid to host the 2032 Olympics jointly. Additionally, before the end of 2018, both countries intend to hold groundbreakings for combining and modernizing their railway lines. Moon said in an interview on September 7 that he wants to avoid war, that both sides agree on denuclearization, and that he wants so much progress that none of it can be undone. In fact, Moon said he wants a peace declaration by the end of 2018. Kim also plans to visit Seoul before the end of this year, and next week Moon will meet with Trump at the United Nations in New York.

All of these sudden and successive summits seem promising, and there is no reason why diplomacy shouldn’t continue. Yet, it is a good idea to ask exactly where this is all leading and what the implications are.

The first fact America must note is that sanctions are already weak and will continue to loosen. With every handshake, photo-op, and declaration of goodwill, the reasons, pressure, and willpower to enforce sanctions decrease. If things are going so well, then why would Washington resort to Maximum Pressure 2.0? No doubt Seoul would firmly object, as would United Nations Security Council members Moscow and Beijing (who are also illegally trading with Pyongyang). Of course, North Korea hasn’t actually made much progress on complete, verifiable, irreversible, denuclearization (CVID), and therefore America must not unilaterally remove sanctions.

But the reality on the ground is that North Korea is pushing the limits of what it can get away with. Kim is supported by countries that look the other way or actively provide Pyongyang illegal aid. Economic pressure should be kept up, but summitry, South Korea’s promises of joint-development projects, and China’s rule-breaking mean that enforcing sanctions is only getting more difficult. Kim knew what he was doing the moment he started acting nice and was able to shake hands with the president of the United States. Pyongyang’s charm offensive has broken sanctions, and they are unrepairable without a significant North Korean provocation, a U-turn by Seoul, or a willingness by Washington to heavily sanctions violators—including China and South Korea. Without the justification that would come from Kim acting out, America’s only way to enforce sanctions would be to come down harder on China—and even South Korea—than it has ever before.

Second, more verifiable and irreversible movement on CVID is needed from North Korea. If CVID is still the goal of Washington and Seoul—the likelihood of success is debatable—then it must focus on achieving it. Pyongyang has to eventually take some steps that are verifiable and irreversible. One the one hand, during the third Moon-Kim summit, Kim appears to have offered just that. North Korea has reportedly pledged to destroy its Dongchang-ri intercontinental ballistic missile (ICBM) test site. That site, also known as the Sohae Launching Station, was used to build ICBMs capable of threatening the U.S. mainland. More importantly, Pyongyang said that it would allow international inspectors to observe the destruction of the facility.

On the other hand, what exactly North Korea means by some of its phrases may be unclear. Take, for instance, Moon’s explanation of Kim’s offer during a press briefing on September 19. Moon declared that “The North has agreed to permanently shut down an engine test site and missile launch pad in Dongchang-ri, in the presence of experts from the countries concerned.” Note the phrase “the presence of experts from the countries concerned.” Does this mean international inspectors from the International Atomic Energy Agency—as presumed by Pompeo in his congratulatory statement? Or does that mean North Korea will only allow foreign journalists—not non-proliferation experts—to witness the destruction of the site, just as it did when it demolished the Punggye-ri facility in May 2018?

Without expert inspectors to verify that the site has been irreversibly destroyed, North Korea could be putting on a show for sanctions relief. After all, Pyongyang did just that in 2008 at the Yongbyon site when it blew up a cooling tower only to resume its nuclear program later. (It should also be pointed out that North Korea also provided a full list of its nuclear inventory back in 2008 as well, to no avail.)

In addition, Moon said that “Contingent upon corresponding measures by the United States, the North will also carry out further measures such as the permanent dismantlement of the Yongbyon nuclear facility.” This raises the question of what kind of “corresponding measures” Kim has in mind. A peace treaty or declaration is most likely the concession both Koreas would want from America. Even Trump promised that he signed the Singapore agreement which stated that “The United States and the DPRK will join their efforts to build a lasting and stable peace regime on the Korean Peninsula.”

A peace treaty will be complicated as it would need to be signed by all of the belligerents, including the United Nations, China and the United States. Conversely, a peace declaration, while more legally dubious and less-binding, might be easier. This is why the last takeaway from the summit is that this entire process takes time. The Iran Deal took two years to work out, and the U.S.-Iran conflict may still end in bloodshed. North Korea could still as well. Mutual goodwill gestures—such as summitry—are needed to build confidence if there is to be any real progress on CVID or long-term peace. Initially, Washington wanted to rush this deal, but now Pompeo is saying that CVID could be accomplished by early 2021. While the slowness of CVID is understandably frustrating, summitry is better than escalation in which “fire and fury” are threatened.

John Dale Grover is an assistant managing editor at the National Interest. He is also a fellow at Defense Priorities and a writer for Young Voices. His articles have appeared in Real Clear Defense, The American Conservative and Fox News. Follow him on Twitter @JohnDaleGrover.