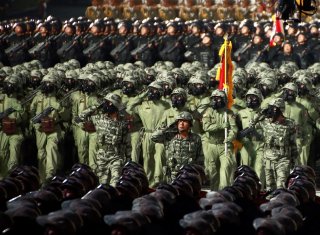 In front of thousands who gathered to celebrate the country’s military parade on October 10, North Korean leader Kim Jong-un applauded his nation’s efforts in keeping out the novel coronavirus that has caused at least 1.2 million deaths around the world.

But behind the scenes, the number of citizens suspected of contracting the disease surged, according to data released by the World Health Organization.

Between October 1 and October 22, 3,373 North Korean nationals were added to the “suspected” patients lists, which likely occurred as the country was ramping up testing of attendees for the massive parade.

Just five days after the event, a total of 4,522 were “suspected” of being carriers of COVID-19. That figure quickly climbed to 5,368, including eight foreigners, by October 22. Many were quarantined but the data does not say whether anyone died from the virus.

Still, according to the WHO, “no positive case was found”—meaning that North Korea has yet to report a single confirmed coronavirus case since the pandemic began roughly ten months ago. It is known that North Korea self-reports all coronavirus-related data to the WHO, so it is difficult to make a clear judgment on how factual the stated numbers are, according to experts.

Jean Lee, the director of the Korea Center at the Woodrow Wilson Center, told The National Interest that “with the borders so tightly sealed, and so few foreigners on the ground in North Korea right now, it’s hard for us to gauge how accurate the claims are.”

She added: “It’s hard to believe there were no cases, given the long border North Korea shares with China.”

The exact number of attendees at the military parade is unknown, but it could be anywhere from thousands to tens of thousands. Video footage showed mask-less cheering citizens standing shoulder to shoulder with one another at Kim Il Sung Square, where a new ballistic missile was unveiled to the public.

Social distancing was obviously not being observed and along with the fact that the attendees weren’t wearing any face masks or coverings, this parade had the potential to be a super-spreader event.

But according to Korea Health Policy Project Director Dr. Kee B. Park, of Harvard Medical School, he believes that “it is entirely possible that North Korea has been successful in keeping the coronavirus out of the country.”

“I am not aware of any request from the DPRK for external health teams to ‘help monitor.’ They seem confident that their strategy has been successful so far,” he told TNI.

“The country is capable of implementing effective mitigation measure if there was to be an outbreak. Yes, many will get sick and some will die but I suspect it will be quickly contained.”

Lee, however, was markedly less confident in North Korea’s ability to battle any large-scale outbreak.

“What we do know is that North Korea’s fragile health-care system would be ill-equipped to deal with a full-blown outbreak of a virus that has taxed even the most sophisticated health-care systems in the world,” she said.

“Without adequate medicine or equipment, North Korea’s doctors rely heavily on preventative medicine. Their strategy is to prevent the virus from spreading or, ideally, coming into the country, and their tactic is to impose strict lockdowns and travel restrictions.”

“Outside of few urban centers, health centers around the country are primitive,” he told TNI, adding that many facilities don’t even have running water or electricity. “North Korea is very vulnerable.”

“North Korea has a history of denying access and throwing up barriers and walls,” he said. “There is very minimal external presence to monitor.”

However, according to Park, the continued effort to keep the virus outside North Korea’s borders may come with “steep economic and social costs.”

“The human cost of the continued isolation and mitigation will likely surpass the expected death toll of the virus itself as the pandemic rages on,” he said. “I would point out that most countries are wrestling with the same problem.”

The U.S. Centers for Disease Control and Prevention states on its website that “COVID-19 risk in North Korea is unknown. CDC recommends travelers avoid all nonessential international travel to North Korea.”

The agency offers a final warning: “If you get sick in North Korea and need medical care, it may be limited.”