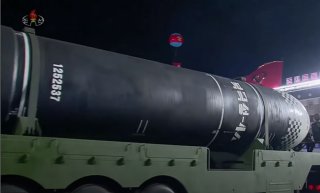 North Korea’s recent military parade at the 75th anniversary of the founding of the North Korean Workers’ Party brought forth a slew of conventional and nuclear weapons. But with the major headlines trained on the DPRK’s new so-called ‘monster’ ICBM and mysterious main battle tank (MBT), one of the parade’s more strategically significant weapons has largely slipped through the cracks. Here is what we know about the Pukguksong-4 SLBM, and the key role that it’s poised to play in North Korea’s emerging nuclear doctrine.

Hints of Something Coming:

The weeks leading up to the October 10 parade were accompanied by in-depth previews from a vast spectrum of Korea and defense experts. There was widespread consensus that the parade would showcase North Korea’s latest strides in submarine-launched ballistic missile (SLBM) technology, with many predicting a celebratory Pukguksong-3 launch.

The Pukguksong-3 SLBM was successfully tested late last year, though likely from a submersible barge--launching it from a fully functioning submarine would have been a forceful testament to the DPRK’s naval modernization and nuclear capabilities. But North Korea unexpectedly raised the stakes by unveiling an entirely new SLBM: the "Pukguksong-4ㅅ," with the symbol at the end confirming that it is, indeed, a sea-based system.

The Pukguksong-4 models shown at the parade were surprisingly shorter than the Pukguksong-3, but we shouldn’t necessarily rush to any technical conclusions from this fact alone; as keenly observed by submarine expert HI Sutton, it’s possible that the displayed missiles are simply missing a section.

Like its predecessor, the Pukguksong-4 is a solid fuel SLBM. Virtually nothing has been confirmed by way of concrete specifications in the days following the missile’s parade debut. It remains to be seen how this new SLBM compares against the Pukguksong-3, which itself is a fairly recent and relatively sophisticated display of North Korean missile technology.  Like the Pukguksong-3, the Pukguksong-4 is likely designed to be fired from the North Korean navy’s new Sinpo-C (also known as ROMEO-Mod), a line of diesel-electric ballistic missile submarines that grew out of the Sinpo-B experimental platform.

Though it is possible that the Pukguksong-4 will exceed the 1,900-2,000 km estimated effective range of its predecessor while offering enhanced offensive capabilities, it is unlikely to pose the same massive leap in capabilities as the one between the Pukguksong-3 and older Pukguksong-1.

With the Pukguksong-3 already being able to strike the entirety of Japan and South Korea without ever leaving port, it is not clear that potential range improvements alone would make a decisive difference in present North Korean missile capabilities. Still, even an iterative update would reinforce North Korea’s ability to credibly threaten critical Japanese and South Korean infrastructure--as well as US assets operating in the Sea of Japan and East China Sea-- with nuclear-capable ballistic missiles.

The Pukguksong-4 is the latest expression of North Korea’s emerging deterrence strategy: Pyongyang intends to circumvent the land-based network of U.S. ballistic missile defenses in East Asia by deploying SLBM’s outside of THAAD’s effective operating range. If North Korea is able to build and maintain enough Pukguksong-4 equipped Sinpo-C submarines to support a constant maritime presence, it could potentially shift the nuclear balance of power on the Korean Peninsula.

North Korea hopes to capture through solid-fuel, nuclear-capable SLBM’s a strategic boon that it has long been unable to achieve through its inefficient and problem-ridden land-based ICBM’s: a reliable source of second-strike survivability in the event of a nuclear conflict.