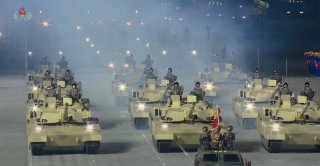 Headlines from Pyongyang’s recent military parade were trained on North Korea’s new ‘monster’ ICBM, but the Korean People’s Army (KPA) also unveiled a slew of major conventional weapons. Chief among them is a mysterious new main battle tank (MBT) that bears an uncanny resemblance to recent Russian and Chinese models.

A column of nine tanks rolled through the streets of Pyongyang as part of a parade to commemorate the 75th anniversary of the founding of the North Korean Workers’ Party. There is no concrete technical information at this point, but we are able to make some inferences from the outward design.

First, it’s likely that this is either an early prototype or perhaps even a proof of concept; there is no indication that these tanks are being serially produced now, or will be at any point in the near future.

Secondly, the models shown at the parade are unlike any indigenously-produced North Korean tank. As noted by other defense observers, the chassis shares numerous design principles with Russia’s new T-14 Armata MBT and, to a lesser extent, China’s MBT-3000. It’s too early to draw definitive conclusions, but--given how starkly this new tank deviates from prior North Korean designs--there is a distinct possibility that the KPA is researching and developing a modern MBT with the help of Russian or Chinese technology transfers.

To be sure, an import arrangement along these lines would be anything but unprecedented. The KPA’s tank roster is, in large part, composed of license-built Soviet T-54/55 and T-62’s--even their indigenously-built tanks, like the Chonma-Ho and newer Pokpung-Ho, are close derivatives of Soviet and Chinese models.

The rest of the MBT showcases an eclectic mix of modern tank features. Defense outlet Military Recognition observed that the turret is designed in a similar fashion to the one found on the latest generation of the US M1A2 Abrams, but also boasts rows of tubes resembling Armata’s Afghanit Active Protection System.

The main armament is very likely a 125mm gun- in keeping with other recent North Korean tanks, it is possibly a derivative of the Soviet 2A46 smoothbore cannon.

The turret also boasts a mounted machine gun and two anti-tank missile launchers for firing what observers believe to be Bulsae-3 missiles, which themselves are a copy of Russian Kornet missiles. The rear hull is outfitted with slat armor, mainly for protection against infantry anti-tank weapons.

It remains unclear which of these features are fully functional, and how many-- if any-- are purely for display purposes. All nine of the tanks came in a light-tan desert camo, which offers little battlefield value in the forested, mountainous terrain of the Korean Peninsula. This could be an indication that the tanks (and several other vehicles shown at the parade) are being marketed as export products, but it’s too early to tell.

These tanks are likely more of a design concept than a fully-realized product-- a distant vision of what North Korean MBT’s could become. Even so, North Korea is demonstrably forging ahead with several ambitious military modernization projects in spite of what has now been fourteen years of intense international sanctions. For western observers, the 2020 military parade is a timely reminder that the KPA continues to defy long-standing predictions of irreversible decline and imminent collapse.