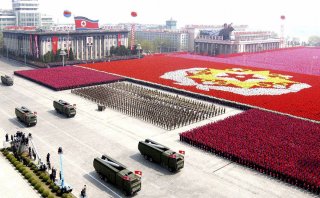 While the American electorate—and indeed anyone with access to any sort of media—is most likely captivated, distracted, or just annoyed with the U.S. Presidental election, the world, of course, keeps on turning.

And that means North Korea has and will remain a top national security concern for whoever wins the Oval Office come November 3rd, or shortly thereafter—at least we hope.

In fact, come this Saturday, we may get a preview of what Pyongyang may have in store for the next administration, thanks to what some are calling a historic and massive military parade to commemorate the 75th anniversary of the Korea Workers Party.

What can we and what should we expect out of this potential show of military might? Well, we asked several of the world’s top North Korea experts, along with various defense and national security experts, for their take. Check out the below for the responses we received:

Bruce Bennett, Defense Analyst at the RAND Corporation: “North Korean hopes to deter and even coerce the United States with ICBMs. Because the missiles shown in parades are often mock-ups and not real missiles, North Korea may increase U.S. concerns by demonstrating more ICBM transporter-erector-launchers (TELs). North Korea has shown thus far 6 Hwasong-15 TELs apparently produced in China, suggesting a small, sanctions limited ICBM threat. By demonstrating a dozen or so of these TELs, North Korea would be suggesting that its ICBM threat is already larger and can grow further because it can acquire even more TELs.”

Gordon Chang, frequent TV commentator and author of the book Nuclear Showdown: North Korea Takes on the World: “North Korea could display mobile ICBMs at its October 10th parade, or it may not. We know, however, that it will display, as it has from its establishment in 1948, militarism and belligerence. The essential nature of the Kim regime, which has spanned eight decades, has not changed. At its core is hostility.”

Ralph Cossa, President Emeritus and WSD-Handa Chair in Peace Studies, Pacific Forum: “The October 10th anniversary parade provides the DPRK with a golden opportunity to be passively provocative. It appears they are refraining from being actively provocative (no launches/missile tests) to not embarrass President Trump (or not stimulate his wrath) but will want to provide the world with a reminder that they are still there and cannot be ignored. My guess is the new “secret weapon” will be a sub-launched ballistic missile system although a new land-based or land-mobile ICBM could also be displayed. Perhaps all of the above. The North Koreans don’t mind being hated, but they hate to be ignored.”

Patrick Cronin, Asia-Pacific Security Chair, Hudson Institute: “With the coronavirus and economic ills at home, Kim Jong-un needs this particular parade to boost morale at home and signal strength abroad. Showcasing long-range missiles and mobile transport launchers may get the most scrutiny and largest headlines around the world. If he could also find a way to underscore his efforts in space and cyberspace, that might be attention-grabbing. Less obviously, perhaps he will look for a direct or indirect way to message his handling of the pandemic, including progress toward creating medical technology and an emergency response corps; but even the degree of social distancing and mask-wearing should be noteworthy. Similarly, the contributions of the KPA in providing humanitarian relief and rebuilding may help Kim burnish his legitimacy at home. Finally, any changes in personnel may also be illuminating for checking on who is up and who may be out.”

Daniel L. Davis, Senior Fellow, Defense Priorities: “The North Korean military parade scheduled for October 10th is likely intended to portray Pyongyang as a growing power, and may include ICBM missiles and a submarine-launched missile test. Beneath the bluster, however, a sober analysis will reveal that regardless of how many goose-stepping soldiers and scary-looking missiles they display, the balance of power is still massively in America’s favor. Regardless of what Kim hopes to project, Washington and Seoul can deter Pyongyang indefinitely. The only way we could ever lose is if we launch a war of choice.”

Eric Gomez, Director of Defense Policy Studies, Cato Institute: “North Korea is going to celebrate Party Foundation Day on October 10th with a big military parade in Pyongyang that will almost certainly feature the country’s nuclear-armed missiles. The two important missile developments to watch for are solid-fuel ICBMs and indigenously made transporter erector launcher (TEL) vehicles. Solid rocket fuel would allow for a more responsive and mobile missile force, which would be harder to eliminate in a preemptive strike. Existing North Korean TELs that carry missiles capable of reaching the United States were imported from China. The ability to produce these vehicles indigenously would allow North Korea to have more missiles ready to move and fire at any given time.”

Wallace C. Gregson, Senior Director, China and the Pacific, Center for the National Interest, former head of U.S. Marines, Pacific: “Nobody gets rich in Las Vegas on North Korean predictions. But one trend is stronger than most – martial displays and provocations on regime or American holidays. So it may be this year when North Korea celebrates the 75th anniversary of the Korean Workers Party on October 10th. News reports say parade practice is underway. We will see martial displays of missile transporters and launchers. Capabilities they want us to perceive will be obvious, potentially reentry and multiple guided independent warhead technology. The goal, as always, is to show the regime’s power, and keep the Kim family in power.”

John Dale Grover, Research Associate, Korean Studies, Center for the National Interest: “During North Korea’s October 10th military parade, Pyongyang may decide to showcase newer, better ballistic missiles. That would allow Pyongyang to rachet up pressure on Washington while waiting to see who wins the U.S. Presidency in November.

A solid-fueled intercontinental ballistic missile (ICBM) or an improved submarine-launched ballistic missile (SLBM) help Kim Jong-un deter America by holding U.S. cities, its bases, or its allies at risk. Pyongyang already has ICBMs, but solid-fueled missiles are easier to fire since their fuel is less volatile. Moreover, North Korea has also tested SLBMs, but these weapons are relatively new.

Merely displaying either weapon would increase pressure on America and South Korea for sanctions relief. Although Kim could test a weapon, he may prefer to do so around or right after the U.S. elections. This would give him maximum leverage by having Washington come to negotiate with Pyongyang rather than the other way around.”

James Holmes, J. C. Wylie Chair of Maritime Strategy, U.S. Naval War College: “As Edward Luttwak points out, foreign weapon systems are largely “black boxes” during peacetime. In other words, it verges on impossible for outsiders to peek inside and take their measure. Observers have to wait until weapons or sensors are used in exercises or combat to evaluate their performance. The black-box effect lets a military-like North Korea’s both display its armaments, extracting political value from them, and conceal the capabilities they bring (not to mention their defects). So I would expect Pyongyang to flaunt its missile inventory at the parade, much as Beijing delights in displaying anti-ship ballistic missiles and so forth.”

Harry J. Kazianis, Senior Director, Korean Studies, Center for the National Interest: "As my colleagues here have pointed out, yes, North Korea seems set to show off some sort of missile—most likely a new ICBM. However, what I fear is what we won't see: the spread of Coronavirus if Pyongyang does not implement standard pandemic precautions—something that seems impossible to do if they conduct the same style of event as in years past.

Such an event is extremely risky in that if only a few people were COVID-19 positive in the crowd they could create a deadly super-spreader-like event—putting potentially thousands of people at risk for infection. In such a scenario, North Korea has little ability to stop mass casualties due to the poor nature of its health care system—one of the worst on the planet.

I would argue this parade is a big mistake on the part of the Kim regime and could come back to haunt them unless extreme precautions are used. However, as is the nature of a parade to demonstrate military might to the entire world, that seems pretty unlikely. Clearly, masks and missiles don’t mix."

Robert E. Kelly, Professor of International Relations, Political Science and Diplomacy Department, Pusan National University: “October 10th is the 75th anniversary of the North Korean Worker’s Party. A massive parade is to accompany it. The looming question is what hardware will the North Korean elite show off. There is anxiety over supreme leader Kim Jong Un’s much-hyped ‘new strategic weapon’ – likely an intercontinental ballistic missile – as a Northern retort to failed US-North Korea talks over the last few years.

But this ironically also an opportunity to view what the North Koreans have. If they have it, it is better for us that they roll it out than hide it away. At least we can see it and have a vague sense of its capabilities. That is better than not knowing. So yes, let’s see the new missile.”

Joshua Pollack, Editor of the Nonproliferation Review: I’d expect to see some number of domestically produced ICBM launchers. It’s not clear to me what they will carry. It could just be Hwasong-15s, or maybe something with a new twist.

Danny Russell, Vice President for International Security and Diplomacy at the Asia Society Policy Institute: “The October 10th parade not only marks the 70th anniversary of the Korean Workers’ Party, it also serves as a messaging platform on the eve of U.S. presidential elections. Those dual purposes seem likely to converge around a display in the military parade that resoundingly demonstrates the quantitative and the qualitative expansion of the DPRK’s nuclear-armed missile forces. Illustrating that he has made good on his 2018 pledge to mass-produce nuclear warheads and ballistic missiles will signal to both audiences – the North Korean public and the next U.S. president, that the DPRK is definitely and irreversibly a nuclear power.”

Editor’s Note: This round-up was compiled by Harry J. Kazianis, Senior Director of Korean Studies, Center for the National Interest. You can follow him on Twitter: @Grecianformula.

Hero Image Credit: A North Korean missile unit takes part in a military parade to celebrate the 75th anniversary of the founding of the Korean People’s Army in Pyongyang in this picture taken April 25th, 2007 and released April 28th, 2007. North Korea celebrated with a grand parade the 75th birthday of its “invincible” army, which experts say is capable of dealing a quick and devastating blow, but is hollow at the core. REUTERS/Korea News Service (NORTH KOREA) JAPAN OUT,