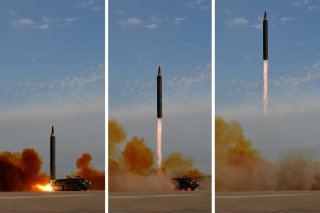 U.S. government officials are increasingly concerned that North Korea could unveil a new type of long-range ballistic missile capable of striking the U.S. homeland with a nuclear weapon, raising tensions just weeks before the presidential election in November.

A senior White House official, as well as multiple U.S. intelligence officials I have spoken with over the last few days, strongly suspect Pyongyang will unveil a solid-fueled intercontinental-range ballistic missile (ICBM) at its October 10th military parade celebrating the 75th anniversary of the Workers’ Party of Korea.

“That seems to be the most likely of scenarios based on their history—and it’s what we are expecting, but, of course, we are hoping to be proven wrong,” noted the senior White House official. “As we have stated on numerous occasions, we strongly encourage North Korea to return to the path of dialogue and negotiation and refrain from all provocations. If they are looking for regime security, that is the only way they can ensure such a goal.”

Such a public display would represent a generational shift in Pyongyang’s missile technology, as North Korea’s current long-range mobile ICBMs—the Hwasong-14 and Hwasong-15—use a liquid-based fuel. While those ICBMs are mobile, their liquid fuel requires longer preparation times as the weapons cannot normally be left in a fueled state, due to the corrosive and highly combustible nature of the chemicals used.

Solid-fueled missiles carry the advantage of being able to stay in a fueled and ready-to-strike state. As a result, they are much more reliable and can be launched faster. This would allow Pyongyang’s ICBMs to truly be completely mobile, making them harder to detect and destroy in a military conflict.

Of course, none of this should serve as a shock to seasoned Korea watchers, as North Korea has tested solid-fueled missile systems for some time now and its last liquid-fueled missile launches date back to its second Hwasong-15 ICBM test in November of 2017.

Also, it was in December of last year when North Korea declared it was preparing a so-called Christmas gift to the United States—many times perceived to be a possible missile launch or reveal of a new missile platform, which never came to fruition. That same month, Pyongyang went on to test a new rocket engine, with many suspecting it could be based on solid-fuel technology. Just a few weeks later, North Korea would declare that it would unveil in 2020 a new “strategic weapon”, with many North Korea military experts saying such wording hinted at a new ICBM based on solid-fuel.

Clearly, such an advance could be leveraged by Pyongyang in several important ways for both global and domestic audiences. Such a reveal could be used to signal strength to whoever wins the Oval Office come November, as Pyongyang hopes to seek an advantage in either new talks or as a first step in much larger provocations in the months to come. It has been several months since North Korea has conducted a missile test of any kind, and nearly three years since an ICBM or nuclear weapons test—a key foreign policy victory touted by the Trump Administration.

North Korea could also showcase such a weapon domestically in a move by North Korean leader Kim Jong-un to create much-needed positive news. This would make sense considering the multiple challenges Pyongyang is facing—dangers from Coronavirus, agricultural shortages, flooding, typhoons and, of course, international sanctions.

U.S.-North Korea diplomacy has stalled since October of last year when working-level talks broke down—with offers of assistance and strange letters. In addition, since then, a break down in relations between Pyongyang and Seoul has become more severe, thanks to North Korea’s attempted detonation of the inter-Korean liaison office back in June.