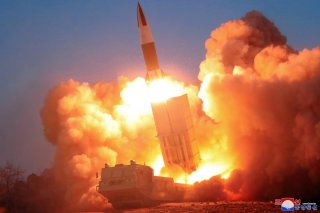 A diverse chorus of voices from inside the White House, U.S. military, diplomatic and intelligence communities are concerned that North Korea could soon raise tensions once again through several potential provocative actions. In multiple interviews conducted over the last several days, intelligence and government sources in South Korea as well as in Japan also expressed similar concerns.

Worse still, many of those same officials expressed alarm that if former-Vice President Joe Biden were to win the Oval Office in November, North Korea could decide to “set the table with a show of military strength,” as described by a senior White House Official. That could mean testing an intercontinental ballistic missile (ICBM) while showcasing new heatshield technology that proves its nuclear warheads can reenter the atmosphere, putting pressure on the incoming administration.

Immediate Worry: North Korea Shows off an ICBM…And Much More

Senior White House and U.S. intelligence officials have already warned of a possible North Korean solid-fueled ICBM reveal at its October 10th military parade celebrating the 75th anniversary of the Workers’ Party of Korea—a worry now expressed by senior Pentagon and U.S. State Department officials I have recently spoken with. However, there now seems to be a broader set of concerns that Pyongyang could have more up their sleeves than just one provocative missile display on October 10th.

“North Korea for several years has had a lot of time and space to develop a range of new and more advanced missile capabilities,” noted a current senior Japanese military official. “Yes, a new version of an ICBM powered by solid-fuel showed off to the world makes sense and seems likely, but we also worry about things like more advanced short, medium and intermediate-range missiles being displayed as well as new mobile vehicles to fire them from.” When asked about such concerns, senior U.S. military officials agreed with such sentiments.

South Korean defense officials were also concerned over North Korean domestic production of evermore advanced transport erector launchers, or what is commonly referred to as TELs. “The more TELs they have the more mobile their missiles are. Combine that with potential new classes of solid-fueled missiles and North Korea becomes a headache for the entire region. If we see a parade filled with TELs that are more advanced—with clear evidence they were domestically manufactured—the world should be concerned. Yes, the ICBMs are important, but here in East Asia, we have a very different set of concerns.”

Or Is an SLBM Test Coming Soon?

While different reports in various news outlets and North Korea-focused analysis platforms debate if, when, and the importance of such a test, government officials, intelligence agencies and military planners in Washington, Seoul and Tokyo are clearly concerned an SLBM test could be in the offing. In fact, an SLBM firing again timed for October 10th is, as one U.S. intelligence officials described to me, “in the realm of strong possibility.”

But just how much of a threat is such a weapon?

While such a test is clearly important as North Korea is working towards a potential second-strike capability, many military analysts and retired submarine experts I spoke with doubted there would be an immediate or even medium-term strategic impact from such a weapon due to the low level of sophistication of the submarines that would carry the missiles. “North Korea is just beginning its journey in trying to fire missiles from submarines” explained a former senior U.S. Navy official with extensive experience in anti-submarine warfare. “While they have been testing such missiles for several years, it seems clear they will need many years to perfect this technology, a technology we have had for many, many decades.” The former official also noted North Korea’s first generation of ballistic missile submarines would be “quite noisy” and “have little survivability” if they actually “tried to attack any target of value.” He added that “the U.S. military would have no problem tracking and killing such subs—and quite quickly, for many years to come.”

And If Trump is Defeated, Prepare for “Pain”: ICBM Test with a Heatshield Reveal

While North Korea has not tested an ICBM since November 2017, with Pyongyang declaring later their nuclear program complete followed by a long-range missile testing moratorium, there is growing worry Pyongyang may change course. Should Joe Biden win the November 3rd U.S. presidential election North Korea may want to demonstrate “the ability to cause trouble and pain—at any time it wishes,” according to a senior U.S. Intelligence official. “The best way to do that would be an ICBM test—the most powerful weapon in its arsenal by far, the missiles that set off the 2017 showdown.”

A senior White House official concurred, worrying that a Biden Administration “would most likely be tested early, likely in the first one-hundred days,” and would not be shocked if Pyongyang fired off an ICBM with a warhead that, while not armed with any sort of offensive military capability, could fall gently from the atmosphere and into the Pacific Ocean. That would prove once and for all the U.S. homeland is truly in range of North Korean nuclear missiles, and that North Korean heatshield technology is indeed working and operational.

Such thinking was also mirrored by Japanese military and intelligence officials as well South Korean military planners who were queried on such a scenario.

How Will Biden Respond?

A Biden campaign official who spoke to me on background agreed the potential for escalation “was very real,” but argued a Biden administration would be ready to “tackle this issue on day one.”

The official, speaking anonymously, explained that an ICBM test was “surely something we are worried about, and we will be ready if and when it does happen.” The official continued, warning that “[I] would want to be clear, no one wants to see Kim test anymore ICBMs. I give Trump credit for getting that concession. But Kim would be wise not to test a Biden Administration. That would be a clear mistake.”

When I asked how a Biden Administration would respond to such an ICBM test if conducted after Biden potentially takes office the campaign adviser said that they hoped that “North Korea decides its not in their interest to act in such an aggressive manner,” but declined to get into the specifics of a response plan, not “wanting to tip their hand.”

Harry J. Kazianis serves as Senior Director for Korean Studies at the Center for the National Interest, a bipartisan think-tank founded by former U.S. President Richard Nixon in 1994. You can follow him on Twitter: @Grecianformula.