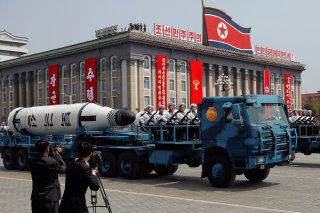 Editor's Note: The following is a response to Victor Cha's rebuttal of his recent opinion piece here in Korea Watch. You can read Daniel's original piece that sparked this debate here.

Victor Cha in a recent letter to the Editor concludes that my September 7 opinion column here in Korea Watch critiquing CSIS’s latest satellite imagery report on the Sinpo South Shipyard “is skewed, if not wholly misleading” and goes on to label my analysis as “flawed.”

He is certainly entitled to his own opinions, opinions I surely respect. But as one might expect, I strongly disagree, for several reasons that I would like to layout for National Interest readers.

First, to be clear, my depiction of the CSIS report as being “all bark and no bite” is mine alone. However, I didn’t come to this assessment out of thin air, but after careful research and compilation of the facts, as well as speaking to experts (including those off the record) who watch North Korean military modernization quite closely and have done so at the highest of levels in our own government.

As the experts I spoke with told me on the record, the North has tested an SLBM in the past using the same Pukguksong-3 missile that CSIS cites in its latest report. SLBM research and development from Pyongyang is an ongoing story that has persisted for years. The report, however, makes no mention of these prior activities.

In fact, what I think is most confusing in Cha’s analysis is his comments to NBC News stating that it “looks like they [the North Koreans] are certainly preparing to do an SLBM test for the first time.” But as anyone can see from the public record, North Korea has in fact tested SLBMs in the past. What Cha most likely meant to say was that North Korea could soon test an SLBM from an actual submarine itself rather than an underwater barge--something important and truly new.

The wording here matters. Due to the highly controversial nature of North Korea, the media parses over every word and phrase quite carefully, always looking for new information on the Kim dynasty’s military capacity. Nobody is perfect, of course. Mistakes can happen (this author has made plenty). But it is vital for all of us to be as specific as possible. The alternative is the media running away with an incorrect conclusion.

Furthermore, I would also challenge Cha’s assertion to NBC News that an SLBM missile test would cross some sort of Trump redline on North Korea—what I assume Cha means is North Korea’s self-imposed testing ban of long-range missiles. As stated earlier, however, this is a missile class North Korea already tested last year. And rather than react with the “fire and fury” rhetoric circa 2017, President Trump largely ignored it. More importantly, the supposed testing ban only covers missiles that are ICBM (at least 5,000 kilometers) in nature. As far as we know, the SLBM currently being developed does not have the ability to travel to that range, at least according to information CSIS carries on its own website.

I would also like to address the issue of whether North Korea is even going to engage in an SLBM launch anytime soon--if at all. Whenever there is activity at one of the North’s military or missile bases or an ominous comment from a senior North Korean official, we in the West have a tendency to assume a missile test or parading of a new weapons system is just around the corner (remember the speculation about Kim Jong-un’s “Christmas gift” last December?). Gen. Robert Abrams, the commander of U.S. Forces in South Korea, is skeptical of such a development, stating in a webinar hosted by Cha himself that “[T]here’s people suggesting that perhaps there will be a rollout of a new weapon system. Maybe, but we’re not seeing any indications right now of any sort of lashing out.” Abrams isn’t the only one who holds this conclusion; according to the South Korean government, “[A]s of now, no signs indicating imminent firings of an SLBM have been detected.” Additionally, 38 North mentions nothing about an SLBM test in its most recent report on Sinpo.

Gauging North Korea’s ballistic missile program is a tricky business. Experts present various theories and assessments about the nation’s technical missile capacity all of the time. CSIS could be right; it could be wrong. We will have to wait and see. In the meantime, others will continue to present different cases about what may be going on in that shipyard and in other missile facilities across the North—and we should encourage the debate. But to suggest that analyzing and critiquing someone else's work or statements is misleading relegates alternative viewpoints to the dustbin.

Image Caption VIA Reuters from 2017: A North Korean navy truck carries the 'Pukkuksong' submarine-launched ballistic missile (SLBM) during a military parade marking the 105th birth anniversary of country's founding father, Kim Il Sung in Pyongyang, April 15, 2017. North Korea has escalated tests of its SLBM programme in the last year. Whilst the isolated country is not yet believed to have an operational submarine capable of carrying more than one missile at the time, its enemies are worried that a fully-functional SLBM would make tracking and intercepting a North Korean missile launch and the submarine from which it was fired very difficult.