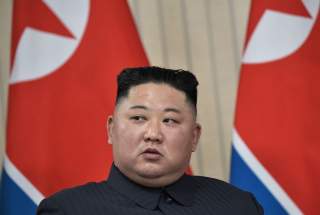 North Korean leader Kim Jong-un recently traveled on April 25 to meet with Russian president Vladimir Putin. According to their statements, Kim has not changed his position of keeping his nuclear arsenal unless he gets certain unclear “security guarantees” from the United States. Kim also wants sanctions relief as part of any denuclearization deal between Kim and President Donald Trump.

Pyongyang’s primary concern is survival. North Korea is surrounded by more powerful countries, many of which have nuclear weapons. Also, South Korea is allied with the nuclear United States. Kim wants to protect himself against regime change and increased sanctions. Although the big question is how Washington can convince Pyongyang to give up nuclear weapons under such circumstances, another vital question is what happens if Kim refuses and relations become hostile and tense again? If America cannot get rid of North Korea’s nuclear weapons for the foreseeable future, how can Washington at least be sure they will never be used.

North Korea has long maintained an interest in the ultimate deterrent of nuclear weapons. In 1992, the International Atomic Energy Agency (IAEA) announced Pyongyang had been deceptive about its nuclear program, which was possibly being weaponized. This led to a series of negotiations led by the United States and other regional powers to halt and undo North Korea’s nuclear program.

The Bulletin of Atomic Scientists estimates “North Korea might have produced sufficient fissile material to build 30 to 60 nuclear weapons, and that it might possibly have assembled 10 to 20 warheads.” Pyongyang could have as many as one hundred warheads by 2020, although there is no way to be certain.

Furthermore, North Korea has a growing arsenal of intercontinental ballistic missiles (ICBMs) that are estimated to be capable—or eventually capable—of hitting all of the United States, from Guam to Washington, DC According to the Arms Control Association, these missiles include the Taepodong-2 (which has yet to be developed as an ICBM) and the Hwasong-14 and Hwasong-15.

North Korean experts have longed debated Pyongyang’s intentions and nuclear doctrine. Are these simply defensive weapons of last resort that three generations of the ruling Kim family only procured to ensure their reign? Or are North Korean nuclear weapons offensive, to be used as blackmail for sanctions relief and to pressure Seoul into accepting unification on Pyongyang’s terms?

There are good arguments to be made for both, but the logic of deterrence remains the same. In theory, none of the parties involved will take action they think will lead to the other side using nuclear weapons. The costs of a nuclear conflict would be devastating and therefore each side would avoid pushing too far, even with lower-level tit-for-tat. The danger is when deterrence breaks down, and previously taboo actions are taken. For instance, if either side believes invasion is inevitable or they could get away with a sneak attack unscathed, then a war could happen. The risk of nuclear weapons use also increases if smaller conflicts or tit-for-tat ever got out-of-hand.

Americans became aware of the threat in late 2017 when Washington and Pyongyang were exchanging increasingly bellicose threats. U.S. officials and media outlets had stunned many Americans by announcing North Korea was further along in its ballistic missile and nuclear warhead miniaturization technology than thought. Suddenly, everyone realized Pyongyang might be able to launch nuclear missiles against the entire United States for the first time.

Although the capabilities and accuracy of North Korean ICBMs are in dispute, it is reasonable to believe Pyongyang has a new ability to threaten America. After all, even if Kim’s missiles might not be all they are made out to be, why would anyone want to find out?

On January 13, 2018, this danger to American lives and security was made awfully apparent to residents of Hawaii when a text message alert about an inbound ballistic missile was accidentally sent by local authorities. Cynthia Lazaroff, a nuclear expert and documentary filmmaker, was living in Hawaii at the time. She wrote a first-hand account of her surreal experience in The Bulletin of Atomic Scientists. The text alert stated, “Ballistic Missile Threat Inbound to Hawaii. Seek immediate shelter. This is not a drill.”

Lazaroff recalls the shock, followed by immediate action and sporadic planning. Few people on the island knew what to do, had a plan, or kept emergency supplies. 911 was jammed with calls, and not everyone could get through to find out more. Some people ran for cover, and others got on the quickly jammed roads to find loved ones or to flee. Eventually, officials got the word out that the alert was sent by accident during a test.

That experience was transformational. As Lazaroff wrote,

I myself traveled to Hawaii for an Atomic Reporters Workshop around the anniversary of the false alarm. We talked with local civilians, professionals, and journalists about what happened. Some people didn’t do anything, either falling into a kind of hopeless acceptance. Others continued about their day believing it was either an error or they wouldn’t survive anyway.

Such experiences bring home seemingly far-off nuclear threats. Additionally, most Americans do not know the danger, how to prepare for or respond after an attack, or how much time they would have. In the case of North Korea, Hawaii residents would have had about twenty-five minutes and only about a fifty-fifty percent chance (if not much lower) of intercepting just one missile.

When the Cold War ended, so too did nuclear risks as a conscious part of people’s lives. According to nuclear historian Alex Wellerstein, who was at the Atomic Reporters event in Hawaii, civil defense drills and information on nuclear attacks are few to nonexistent. Wellerstein also heads a project called Reinventing Civil Defense and he has warned:

“The elimination of nuclear risk from the lived experience of Americans has relegated nuclear issues into a near mythical realm, one that has led to both fatalism and apathy… Without this deep awareness, nuclear issues will not command the popular support necessary to inspire meaningful public action.”

Even the federal government’s official disaster preparation site, Ready.gov, features limited information about a nuclear attack. Such information also is not prominently featured on its homepage or widely distributed. Further, during the January 2019 government shutdown, Ready.gov was not “actively managed.”

It is not just American citizens who are unprepared. Policymakers in Washington have at several times underestimated the risks, such as when they argue for preemptive attacks on North Korea.

Furthermore, a nuclear attack is possible outside of a deliberate war. As long as some level of mutually-assured-destruction holds, then no two nuclear powers would deliberately use nuclear weapons first. Daniel Davis, a veteran and a senior fellow and military expert at Defense Priorities, explained to the National Interest, “We can remain confident... that Kim would never start an unprovoked war, as he knows he would lose and his nation could be annihilated.”

However, deterrence could breakdown as the result of accidents, miscalculation, misperception, or overreaction. History is full of examples of attacks and incidents which nearly got out of hand.

There are too many close calls of nuclear use to count, but these illustrate that mitigating risk should be a top priority: