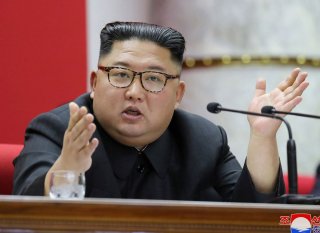 The global coronavirus pandemic has swept on after ravaging China. Given geographic proximity and cross-border traffic, North Korea almost certainly is dealing with the disease’s spread despite Pyongyang’s official denials. Perhaps more serious for Pyongyang, however, has been the impact of the health care crisis on America: no one is paying attention to the Democratic People’s Republic of Korea.

For decades the DPRK has had a disproportionate impact on U.S. policy. Indeed, the North long has been the tail wagging the dog. In no other case has such a small, poor, isolated, and distant nation been able to force so many other countries, most notably a global superpower, to respond on their terms.

In 1950 Kim Il-sung’s invasion of the South triggered immediate U.S. intervention. In contrast, Washington did not enter World War II, which consumed Europe, a region of obvious interest, until America itself was attacked. The Korean War lasted almost as long as U.S. participation in World War II. Moreover, the former’s inconclusive end led to an American security guarantee and a military garrison. Nothing changed even decades later when America’s ally, the Republic of Korea, emerged as a serious power on its own.

Indeed, when the DPRK began developing a nuclear weapon, Washington took on responsibility for blocking Pyongyang, with a succession of presidents insisting that the North could not—must not—build nukes, and certainly not create long-range missiles capable of carrying such weapons. Thus, whenever North Korea wanted to gain attention or initiate a shake-down, it launched a missile or conducted a nuclear test.

Such tactics abated while President Donald Trump and Supreme Leader Kim Jong-un were talking. But with the breakdown in negotiations between the two, the North returned to missile-testing, though so far only of the short-range variety. On Saturday, the North Koreans fired more such missiles.

The ROK, as the country most threatened by such weapons, noticed. Its military called the tests “highly inappropriate,” without effect on Pyongyang. In contrast, Washington did not notice—or, at least, think the action important enough to warrant a response. For once, policymakers in Washington were too worried about America.

Trump recently wrote Kim apparently offering COVID-19 assistance. Of course, China, not America, is best positioned to offer medical supplies, which the DPRK most probably needs. Still, the administration should suggest medical and scientific aid, as a prelude to initiating official talks on additional matters other than denuclearization. Washington also should develop its own proposal for suspending sanctions as proposed by Moscow and Beijing, which could be a prelude to revived nuclear negotiations in which America would offer interim sanctions relief in return for steps to limit and reduce—if not eliminate—the North’s nuclear arsenal.

More fundamentally, however, Washington policymakers should reflect on how the coronavirus pandemic illustrates Pyongyang’s essential irrelevance. The North cannot launch a nuclear attack on America without ensuring its own destruction. Furthermore, the ROK is well able to confront the North’s numerous but antiquated conventional forces. And economically the DPRK will matter only if it reforms.

Pyongyang remains a disruptive actor in Northeast Asia, but that is a problem for the North’s neighbors, not America. The regime mattered during the Cold War because it was allied with the Soviet Union, a hegemonic competitor to the United States at the time. A North Korean victory could have reverberated all the way to Europe. But that world of bipolar competition has disappeared.

Washington should begin a phased hand-off of the DPRK to the latter’s neighbors, most importantly South Korea. American troops should begin coming home and sanctions should be loosened to allow Seoul more opportunities to build economic ties with the North. Additionally, Washington should hint that it would not object if the ROK and Japan decided that North Korean nuclear threats required construction of countervailing arsenals. Finally, the United States should mention that possibility to Beijing if the latter fails to help construct an effective, non-nuclear security structure in the region.

The coronavirus pandemic is a human tragedy. However, it offers Washington an opportunity to rethink its fixation on the DPRK. The Cold War is over. Pyongyang simply doesn’t matter much to America—certainly not as much as to South Korea and other nations in Northeast Asia. It is time for Washington to disclaim responsibility for solving the North Korea problem.