How Do You Solve a Cold War Conundrum Like Korea? 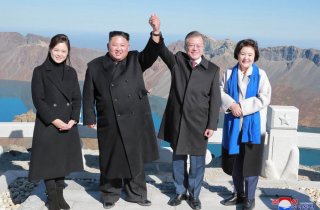 The armistice agreement that suspended the fighting on the Korean Peninsula in July 1953, three years and one month after the fighting began, stipulated that all parties to the conflict would convene within three months to negotiate “the withdrawal of all foreign forces in Korea” and achieve “the peaceful settlement of the Korean question.” Seventy years later, over twenty thousand U.S. forces remain in Korea and a peaceful settlement seems as elusive as ever.

A child of the early Cold War, the division of Korea and North-South Korean hostility has outlasted the Cold War by more than three decades, despite vast changes in global geopolitics, the international relations of East Asia, and the politics and economies of North Korea and South Korea. Yet there is reason to believe that the war could come to an end sooner rather than later because international politics are changing now in ways that could be more conducive to peace on the Korean Peninsula than even the end of the Cold War. It is possible, perhaps even likely, that the Korean War could be over before the war’s seventy-fifth anniversary in 2025.

Thirty years ago, conventional wisdom held that, as with divided Germany, Korean division could not survive the Cold War’s end—or more specifically, that North Korea would soon collapse, leading to Korean unification and ipso facto the end of the Korean War. It turned out that North Korea had much more staying power than East Germany, and despite, its economic travails and international isolation, North Korea is still with us today. Expectations of a North Korean collapse and unification by absorption overlooked both the resilience of the North Korean regime and the nature of the Korea War itself, which was not an act of Soviet aggression through a Korean proxy, as many Americans believed at the time, but the culmination of a civil conflict between two rival regimes, each supported by one of the Cold War superpowers. Of course, the Soviet Union is long gone, but South Korea remains allied to the United States, which North Korea perceives as the greatest threat to its existence. On the other hand, South Korean perceptions of the North Korean threat have changed greatly in recent years, especially under the Moon administration, which has made inter-Korean peace and cooperation a top priority. At the same time, America’s global alliance system is potentially facing its greatest transformation since the early years of the Cold War, not least with regard to South Korea. America’s retreat from its overseas military commitments, which is likely to continue regardless of the party in power, may offer the two Koreas a new opportunity to deal with each other directly, without foreign interference.

So long as the two Koreas agree to resolve their problems peacefully, they should be supported in these efforts by the international community, including the United States and China. Mutual cooperation rather than hostile alliances can bring an end to the Korean War and create a peaceful environment in which the two Koreas can finally work out the process of Korean reunification in their own way.

Charles K. Armstrong is The Korea Foundation Professor of Korean Studies in the Social Sciences at Columbia University, where he served as Director of the Center for Korean Research and Acting Director of the Weatherhead East Asian Institute (WEAI). He is the author, editor, or co-editor of five books on modern Korean history and politics, and his newest book, soon to be released, is A History of Modern East Asia, 1800 – present.