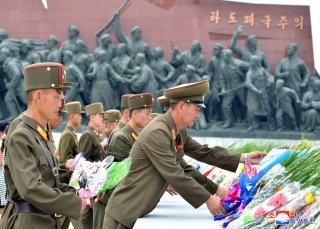 In 2017, two hours after its sixth nuclear test, the North Korean regime released a song entitled “There Is Peace in Our Weapons.” Here are some of that song’s lyrics:

Emotional brainwashing is the most important aim of North Korean propaganda. Just as the tale of Kim Il-sung liberating Joseon from Japan and winning the Korean War continues to be told in the North, so too do tales aimed at engendering hostility and hatred toward the United States and South Korea.

The history of the Korean War as taught by the regime is reflected by the Sinchon Museum of American War Atrocities, a museum that evokes hatred in hearts across the country. The regime claims that the U.S. military committed a massacre of civilians in the North Korean town of Sinchon during the war, and so there you will find the “400 Mothers’ Tomb” and “102 Children’s Tomb”: memorials to the women and children butchered in the alleged atrocity. This alleged war crime known as the Sinchon Massacre is a piece of anti-American propaganda which shouts to the ranks of their armed forces. Anti-American and anti-South Korean indoctrination continues to this day and serves as the primary source of division on the Korean Peninsula.

It is said that North Korea is perpetually on a war footing and that all of its people are part of its armed forces. North Korean children must join the Young Red Guard and practice shooting firearms with live ammunition by the time they are 15 years old. University students in their third year must do 6 months of military service, and, in the event of war, these reservists would don their military uniforms and be ordered to the front lines. The general population drills several times a month. The North Korean regime insists that the military and military matters be prioritized before all things, and this military-first concept entails isolation from international norms. They say that if there is no strong military, Korea will be swallowed up by external forces.

In order to really understand North Korea, it is imperative that its 75-year political history be understood. Kim Il-sung governed the country with a combination of Marxist-Leninist ideology and the Juche Idea, and Kim Jong-il carried out a “military first” policy. Kim Jong-un, succeeding in the line of dictators, insists on nuclear power and commits ruthless atrocities. If the regime desired unification of the Korean Peninsula, it would not have developed nuclear weapons and new missiles to deliver them. At the same time, if war were to break out, the regime would no longer be able to control the country and its nuclear arsenal would become useless. Neither does China, for that matter, wish to call for reunification or see war on the Korean Peninsula. Meanwhile, what the North Korean regime desires is the withdrawal of American armed forces from South Korea.

For the war to come to an end, it is of the utmost importance that the North Korean people be accurately informed of their history. To this day, North Koreans remember the Korean War as being between Koreans, including the people of South Korea, and the United States. For the seeds of change to be sown, the North Korean people must comprehend the reality of the atrocious situation they face. How could this be achieved? Uncensored access to social network services (SNS), the internet, newspapers, and TV stations are all great candidates. The free world has a responsibility to help the North Korean people escape the brutality of the dictatorship under which they live, and an answer to ending this treachery may be found in the power the media brings to bear when it concerts its efforts.

Jihyun Park is a North Korean defector and human rights activist. She currently serves as a Reporter with Radio Free Asia, as Outreach Director at Connect: North Korea, as Co-Director of Stepping Stones, and she is co-author of Deux Coréennes.