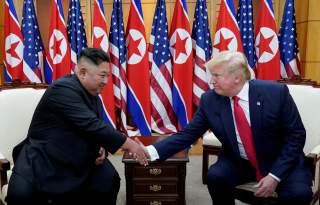 The chances for any nuclear or peace deal with North Korea are rapidly dwindling. Kim Jong-un’s end-of-year deadline for a 2019 agreement will likely come and go without any significant progress. Pyongyang has repeatedly announced that its deadline is approaching, insisting that it is up to the United States to break the impasse. However, the question is whether or not North Korea’s rhetoric really means that 2020 will see a return to the norm of inter-Korean tensions accompanied by mutual threats from Pyongyang and Washington.

In a November 14 statement, a DPRK State Affairs Commission spokesman warned that “The US is advised to meditate on what influence the ‘new path’ we could be compelled to take will have on the ‘future of the US’.” Such statements are largely interpreted to mean that without a deal, Pyongyang will become more hostile. This could include either full-fledged tests of intercontinental ballistic missiles (ICBMs) capable of hitting America or another nuclear test—if not both. These tensions will directly impact South Korea’s security and will sink President Moon Jae-in’s attempts at building a peace regime on the Korean peninsula.

The entire situation with North Korea is full of bad options. Nuclear weapons are Kim’s insurance against regime change and also a tool to blackmail Seoul and Washington. Pyongyang has little incentive to get rid of its weapons of mass destruction, and has a pattern of saber-rattling followed by some concessions in order to get sanctions relief or international aid. Kim does not want to end up overthrown and dead like Iraq’s Saddam Hussein or Libya’s Muammar al-Gaddafi.

On the one hand, this reality means that Washington’s insistence on denuclearization first in exchange for the reward of eventual normalization and sanctions relief are a non-starter for Pyongyang. Full upfront denuclearization remains an impossible goal that only makes coordination between Washington and Seoul harder while also ensuring failure. This failure will likely give Kim a reason to lash out in 2020 over a lack of normalization and sanctions relief.

On the other hand, a return to the “maximum pressure” campaign of economic and military containment won’t change much either. Decades of pressure did not stop North Korea from building and keeping the bomb and it won’t change Kim’s mind now. Moreover, sanctions enforcement has broken down with China committing numerous violations. Beijing does not want to see Pyongyang collapse, and the ongoing trade tensions with the United States do not give China any reason to act any differently. The Trump administration had a choice—prioritize pressure and diplomacy to achieve a breakthrough on North Korea’s nuclear program or use tariffs to try and address long-standing economic and security grievances with China. The White House initially chose Pyongyang but has increasingly focused on Beijing. This means maximum pressure won’t be as effective if Kim acts out in 2020.

In the meantime, America and South Korea are right to maintain their alliance and deterrence. They are also correct to work together on keeping communications open with Kim in the event of a crisis. While Americans are under North Korea’s missile threat, South Koreans have the most clear-cut interest in maintaining deterrence while also avoiding war because any conflict would harm them the most. This is why Seoul has ramped up defense spending over the last five years while also trying to push President Donald Trump into another summit with Kim before the New Year.

The Ministry of National Defense posted a $42.5 billion budget for 2019—an increase of 8.2 percent over 2018. This level of spending is good for Seoul’s security and also demonstrates that South Korea cares about its defense spending. Meanwhile, summitry also helps to reduce tensions, although at this stage another summit is only worth it if a genuine breakthrough was already agreed to beforehand in working-level talks. For instance, a “smaller deal” involving all of North Korea’s Yongbyon nuclear facilities in exchange for lifting the most recent United Nations sanctions is one option. Another possibility is for each side to find a way to formalize and regularize their communications such as by opening liaison offices.

But the problem is that there is not enough time and there is plenty of bad faith to go around. It is unlikely that even a “smaller deal” is doable. Indeed, these deals cannot really be described as “small” at all—they are only “small” in comparison to the already incredibly implausible insistence by Washington on a grand bargain of full and immediate denuclearization. Besides, Trump is already distracted by impeachment proceedings and has the November 2020 presidential elections coming up.

In a similar vein, without America’s cooperation and enough time, President Moon Jae-in’s plans for a peace regime cannot be achieved in full. Moon’s priorities are the opposite of the Trump administration’s, as Seoul would like to build a peace regime first as a pathway to eventual denuclearization. The Blue House sees building trust and lowering Pyongyang’s sense of insecurity as necessary prerequisites to ending the nuclear threat. But Moon has his own upcoming April 2020 elections to worry about and will have to contend with how Kim acts in 2020. Therefore, at least in the near-term, a complete peace regime with an end-of-war declaration, inter-Korean development projects, and a further reduction in military assets and activity along the demilitarized zone cannot be achieved in full.

So where does it leave both Koreas and the United States? What happens if Kim does test ICBMs or nuclear weapons in 2020? What if Pyongyang decides to start early and interrupt America’s Christmas holiday or wait until Tokyo’s 2020 Summer Olympics?

Washington and Seoul may well be forced to return to some semblance of maximum pressure in order to dissuade Kim from conducting further tests. The degree to which both allies agree on such a campaign will be another source of tension that Pyongyang will attempt to exploit. But a return of tensions need not be disastrous if each of the three countries refrains from an escalating spiral of rhetoric and threats. A certain amount of harsh statements and military exercises are routine and expected on the Korean Peninsula, but the catch is to deter without coming across as intending to start a war. It is certainly imaginable that Trump could threaten a “bloody nose” attack, but also that he could dismiss a North Korean ICBM test as a mere “satellite launch.” This latter option would let him avoid confrontation and still claim a diplomatic win for the 2020 elections.

At the end of the day, Seoul and Washington need to deter while keeping the door open to diplomacy. This is the same as it as always been and both allies need to work with each other and other regional partners.

This means that the United States should quickly and reasonably conclude its Special Measures Agreement with South Korea on how much money Seoul provides to support U.S. forces stationed on the peninsula. Although it is true that South Korea is a very prosperous ally and could afford to shoulder more of the cost, South Korea already does more than most of America’s allies. Seoul paid about $9 billion for America’s Fort Humphreys and Washington should drastically bring down its absurd demand of $4.7 billion in troop support for 2020.

Finally, South Korea must also focus on resolving its issues with Japan. Seoul’s concerns are real and should never be taken lightly. At the same time, South Korea was right to stay in the General Security of Military Information Agreement (GSOMIA) with Japan. This military-information sharing pact is vital to ensuring America’s allies can communicate quickly and accurately during a crisis or North Korean weapons test. Seoul and Tokyo must share North Korean-related intelligence regularly again and work with Washington to ensure stability and security for all three powers going into 2020.

South Korea is an important American ally and a country that faces a real threat right on its border. Washington and Seoul need to continue to deter Pyongyang into 2020 while knowing that while tensions may rise, they don’t have to get out-of-hand.

John Dale Grover is a Korean Studies Fellow at the Center for the National Interest and an Assistant Managing Editor at The National Interest. Note that is article was first published in Korean by the Korea Institute for Military Affairs in their monthly journal.