Time Is Running out for a Deal with North Korea 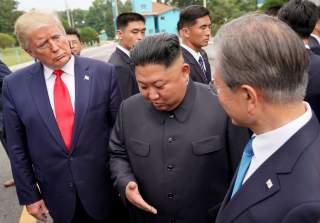 Time is running out to achieve a real breakthrough with North Korea. President Donald Trump and North Korean leader Kim Jong-un have attempted multiple times to find a diplomatic solution over Kim’s nuclear arsenal. South Korean leader Moon Jae-in has also reached out to both sides, most recently declaring his dream to see both Koreas reunified by 2045. Unfortunately, the following day Moon was met by insults and missile launches as Pyongyang rejected further negotiations. All three countries—North Korea, South Korea, and the United States—need to be on board with any solution, and any of them could derail talks. And time is short.

Although talks could fail because of each other’s actions, they are perhaps more likely to fail due to each country’s domestic politics. All three leaders know that their supporters want to see immediate progress and are getting impatient with repeated summits with little to show for it. Moreover, each government’s domestic opposition is also always ready to critique their diplomatic outreach. North Korea is a dictatorship, but even Kim must consider the mood in his inner circle and military as he attempts negotiations with America, their historic enemy. Furthermore, in the case of the two democracies, South Korea and America have upcoming elections that could change what course those countries take.

North Korea has set the end of 2019 as a deadline for getting things done before they possibly return to intercontinental ballistic missile and nuclear tests. After the collapsed summit with Trump in Hanoi, Kim announced, “We will wait for a bold decision from the U.S. with patience till the end of this year but I think it will definitely be difficult to get such a good opportunity as the previous summit.” There is a good chance that Pyongyang will follow through with shifting gears if no deal is reached by the end of 2019. Given that any deal takes at least months to negotiate—the Iran Deal took two years—it is highly unlikely that a major breakthrough will occur in under the next four months.

However, what is possible is a deal that makes future escalation unlikely instead of focusing only on denuclearization. The question of what actually happens to all of Kim’s nuclear program and weapons could be addressed later. Instead, a deal could focus on a peace treaty or liaison offices. Another possibility is some limited denuclearization in exchange for some limited sanctions relief. Any of these deals would still be very difficult, but more doable within Kim’s deadline than a grand bargain that addresses everything.

Trump might choose such an option to declare progress as the November 2020 Presidential and Congressional elections loom closer. Also, Kim might be persuaded to extend his deadline or say it was partially fulfilled—thereby claiming victory for himself domestically as well.

Making real progress is necessary and in America’s interests. If North Korea becomes more aggressive in 2020, there is the risk of Trump returning to the threats of “fire and fury” that marked the tense months of 2017. High tensions coupled with harsh rhetoric from two nuclear-armed powers is not a good thing for anyone.

If a deal is possible, it needs to happen soon. The problem is time. Washington needs to take advantage of the rare occurrence of having all three countries in agreement that diplomacy is a better option can confrontation. Something sufficient needs to be negotiated by the end of this year to buy a bit more precious time to work out any details.

The unfortunate truth is that even then, it is a race against the clock. After scrambling for a deadline of fewer than four months, diplomats and working-level officials then have to keep in mind South Korea’s April 15, 2020 legislative elections—three-and-a-half months from the end of 2019. This is because if Moon’s party loses those elections, he might be forced to tamper down his strategy of outreach to Kim.

On the other hand, if Moon has a strong enough showing, active negotiations could continue during the not-quite seven months before America’s November 3, 2020 elections. Yet, given the all-consuming nature of U.S. Presidential elections, Trump will have less bandwidth to focus on any negotiations with Kim and those months will go by very quickly.

Ultimately, Washington should continue trying for a breakthrough while the current favorable political alignment still exists. At the very least, a minor deal would help to avoid a return to escalation spirals and threats. It is doubtful any deal could ever achieve full denuclearization, but at best a peace treaty or liaison offices would open a badly-needed channel of communication and crisis management during future emergencies. Given America’s experience of many close calls with previous nuclear-armed rivals, it would be wise to find a way to manage relations with North Korea better.

Confrontation may resume, and Kim’s choices may relegate him to the penalty box indefinitely. That would be disappointing but not surprising. The good thing is that North Korea can be safely managed and communicated with. The real tragedy would be if all three countries let this opportunity slip away for lack of time and far-sightedness.

John Dale Grover is an assistant managing editor at The National Interest and a Korean Studies Fellow at the Center for the National Interest. He is also a fellow at Defense Priorities. His articles have appeared in Defense One, Real Clear Defense, The Diplomat, The Hill, Fox News, and The American Conservative.