H.R. McMaster Is Up To His Old Tricks on North Korea 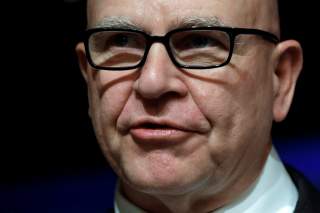 Retired Lt. Gen. H.R. McMaster may not be churning out policy papers for the president or chairing meetings of the National Security Council anymore, but that doesn’t mean he intends to be quiet and ride into the sunset.

Since his resignation, the former national security adviser has been working for the Foundation for the Defense of Democracy (FDD), one of the more hawkish think tanks in Washington, D.C. (and perhaps not coincidentally, one of the most influential in the Beltway) and chairing its relatively new Center on Military and Political Power program. From his perch, McMaster has continued to dispense what he sees as wisdom to his former boss from the outside.

He did it again last week. Speaking at an event at FDD, McMaster threw bows and arrows at President Trump’s North Korea policy and warned the White House about falling for Kim Jong-un’s voodoo. While he defended Trump’s summitry with the North Korean leader as a necessary move to get the diplomatic process up and running, the 3-star General also sent his former colleagues a message: if you intend to continue negotiating with Pyongyang, you better do so with awareness of North Korea’s trickery, in which they grab whatever economic relief they can get before reneging on their own commitments. Offering early sanctions relief in return for simple promises, in McMaster’s telling, would be “the definition of insanity,” a visible example of an administration that doesn’t understand North Korea’s diplomatic history.

Leave aside for the moment McMaster’s selective memory and cherry-picked history, where the Kim regime’s shenanigans is solely responsible for the last three decades of U.S.-North Korea diplomacy. Anybody who has studied the period immediately after the 1994 Agreed Framework would tell you that this simplistic, conventional view is simply not true. Although the North Koreans engaged in plenty of violations in the years after the Agreed Framework was signed, Washington’s implementation was anything but stellar. Indeed, it was saddled by domestic politics (where a GOP-led House of Representatives undermined the funding needed to execute the agreement), multiple delays in the delivery of fuel oil, and complications with building the light-water reactors Washington promised in exchange for the North’s disabling of graphite reactors. The U.S. contributed to the eventual demise of the agreement; by the time the U.S. intelligence community discovered Pyongyang’s development of a covert uranium enrichment program, trust between the two countries was scraping the bottom of the barrel.

But all of this is just an appetizer to the main course, which was McMaster’s use of the term “insane” without the slightest bit of irony or self-awareness.

McMaster, you might recall, was one of the most high-profile supporters of what was dubbed at the time the “bloody nose” option, where the U.S. magically scares the Kim regime into nuclear submission by bombing a few pinpoint military targets—repercussions, retaliation, and prospects of a wider conventional military exchange be damned. The former national security adviser wasn’t only a proponent of this military option (although he has frequently claimed otherwise), but an advocate for it internally, pressing former Defense Secretary Jim Mattis for military plans to the point of causing alarm within the Pentagon. He claimed during a White House briefing that “There is a military option” to the North Korean nuclear problem—an observation that, while true, wasn’t exactly an option any serious person would recommend as viable given the horrendous humanitarian consequences that would result.

This is also the same H.R. McMaster who consistently hyped the North Korean threat during numerous television appearances, leading one to experience a bit of Condoleeza Rice, “mushroom cloud” deja-vu. On North Korea at least, McMaster was nearly as ideological as his successor, John Bolton. Even Bolton didn’t go on TV and suggest that Kim Jong-un was a raving lunatic immune to the theory of deterrence, a theory the U.S. has actually successfully practiced against the Kim regime since it conducted its first underground nuclear test more than 12 years ago.

McMaster, however, did. And outside of government, he continued to peddle a similar line, flat-out concluding that the United States simply couldn’t live with a nuclear-armed North Korea due to any number of reasons (nuclear blackmail, proliferation of nuclear material to other rogue states, danger to the non-proliferation regime), all of which the U.S. has either done contingency planning for or are scenarios applicable just as much to other nuclear powers (Pakistan).

There is no shortage of pundits, analysts, and ex-government officials volunteering wisdom on what Trump should and should not do on North Korea policy. Trump can call a lot of numbers on his Rolodex. H.R. McMaster should be nowhere near the top of the call list.

Daniel R. DePetris is a columnist at the Washington Examiner and a regular contributor to the National Interest.