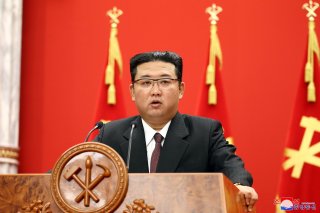 Sanctions don’t work. At least, they don’t cause governments to yield political power or abandon territory, weapons, and other interests viewed as vital. So it is with North Korea, which is heading for another “arduous march,” according to Supreme Leader Kim Jong-un, referring to the terrible famine of the late 1990s.

The Kim regime continues to produce missiles, nuclear weapons, and a host of other war materiel. In January 2021 Kim said creating nuclear weapons was “the exploit of greatest significance in the history of the Korean nation​,” quite a claim for a people whose kingdoms go back centuries. Kim also presented a long list of weapons under development. In October, Kim said his country needed to possess an “invincible military capability.” Pyongyang later justified its activities by pointing to the hypocrisy of Americans producing weapons for themselves while criticizing the North’s activities.

Washington’s protests have not impressed Kim. He stated that “The US.. has frequently signaled it’s not hostile to our state, but there is no action-based evidence to make us believe that they are not hostile.” Rather, he added, “The US is continuing to create tensions in the region with its wrong judgments and actions.”

That certainly was Kim’s view of the sanctions proposed by the Biden administration in January 2022 after two recent Democratic People’s Republic of Korea’s (DPRK) missile tests. Washington penalized several North Korean officials and proposed new UN measures on the DPRK, but those sanctions are unlikely to win Chinese and Russian support.

Pyongyang responded sharply, launching two more short-range missiles from rail cars. North Korea dismissed administration threats: “The U.S. is intentionally escalating the situation even with the activation of independent sanctions, not content with referring the DPRK’s just activity to the U.N. Security Council,” stated the Foreign Ministry. North Korea also warned: “If the U.S. adopts such a confrontational stance, the DPRK will be forced to take stronger and certain reaction to it.”

That could be a longer-range missile or even nuclear test.

Sanctions obviously have not deterred North Korea from devoting a disproportionate share of its resources to the military or developing UN-prohibited missiles and nuclear weapons. Economic penalties have failed to convince the DPRK to roll back any of its military programs. If anything, Kim has used sanctions to justify new advances, proving that Pyongyang will defend itself and not be intimidated.

Yet some observers still hope to find the perfect sanctions recipe that will disarm North Korea. It is the classic mistake of hope trumping experience. Military action, with a significant risk of war, surely is too dangerous, given North Korea’s ability to retaliate with nuclear weapons. Diplomacy has failed thus far, and Kim shows no interest in talking to the United States now. Thus, contended Nah Liang Tuang of Singapore’s S. Rajaratnam School of International Studies, “the only door open is a sustained maximum pressure strategy against the regime.”

Advocates for sanctions inevitably call for tougher measures when even the strictest sanctions fail. It was no different with President Donald Trump. He imposed “maximum pressure” on North Korea, Iran, Syria, and Venezuela, as well as lesser penalties on Cuba, Russia, China, and even Germany, an American ally. He failed to achieve his objective in every case. Not one government gave in. His record was a perfect zero.

Despite this, he continually reinforced failure. When Trump’s targets failed to fly to Washington and sign surrender documents, he added more sanctions. And then even more. Unsurprisingly, these sanctions also failed. Nevertheless, advocates blamed their lack of success on failing to be tough enough. For instance, the Center for Security Policy’s Grant Newsham claimed: “Sanctions do work. I would submit that they’ve never been tried with any degree of seriousness towards North Korea,” a curious claim to make when Beijing was enforcing the measures with sufficient alacrity to spark angry protests from the DPRK.

Nah also recommended even tighter controls: “The U.S. and other stakeholders should pursue watertight enforcement of all UNSC sanctions against North Korea. Since such sanctions amount to an embargo on most of the DPRK’s official economy, this will make the opportunity cost, or the cost in terms of alternative spending forgone, exorbitantly high for any expansion or even maintenance of Kim’s nuclear weapons.”

Where, one wonders, can such a watertight system be found? The problems with this argument are many. The tougher the sanctions, the greater the profit from smuggling. Neighboring countries, such as the People’s Republic of China, also often have political and security reasons for moderating enforcement. The more countries the United States attempts to punish to enforce its original sanctions, the greater the resistance and price paid by America.

This is a particular problem regarding North Korea, since compliance by both Beijing and Moscow is necessary to effectively enforce economic restrictions. Both countries already are subject to U.S. penalties for other reasons, and neither is inclined to be helpful for American policy in Northeast Asia. Forcing them to comply is a steep task. Complicating it further, few of America’s friends and allies would support stringent controls over commerce with China.

Although North Korea’s weapons programs are not cheap, Pyongyang has managed to maintain funding even during its most economically desperate times. The regime has been able to find the resources necessary to become a nuclear power with an increasing long reach despite “maximum pressure.”

Nah ignored the reality that the DPRK, not America, decides whether the price exacted by sanctions is “exorbitant.” North Korean leadership has been willing to accept a very high cost paid by those outside of the political elite and military. During the mid- to late-1990s as many as three million North Koreans died during the famine, but the regime did not change course. Although Kim’s rhetoric was measured at the party plenum which closed out 2021, it was evident that food production is lagging badly. Nevertheless, the regime launched four missiles in the following weeks.

Ironically, the COVID-19 epidemic provided an opportunity to test the thesis that watertight sanctions would force the Kim regime to crawl back to Washington and disgorge its nukes. Pyongyang closed the country’s borders in January 2020. It isolated itself from the world, ordering its border forces to shoot and kill anyone seeking to enter. Aid workers and diplomats went home. Even most trade with China appeared to end.

It is unlikely that the US could ever attain a similar level of control. Yet the North continued to develop and deploy an array of sophisticated new weapons.

Now trade appears likely to resume, with the first freight trains seen crossing the PRC-DPRK border in seventeen months. Such commerce will be quarantined and disinfected, but will ease pressure on North Korea. And the United States has no practical way to interdict such shipments.

If increased sanctions on North Korea won’t work, it is time to reconsider American policy. While retaining personal and sectoral penalties—focused on military and dual-use technologies—Washington should consider lifting broader economic penalties which “work” only by impoverishing the entire population. These sanctions keep the DPRK notably poorer economically but only somewhat weaker militarily than it otherwise would be. They don’t prevent it from being deadly, able to kill hundreds of thousands, or even millions in a full-scale war. This means innocent North Koreans are suffering for no good reason.

In practice, there is only one option dealing with North Korea and that is negotiation. Diplomacy might be doomed to fail. However, reducing sanctions, the most antagonistic aspect of America’s “hostile policy,” might create new areas for agreement. Even if not, the situation is unlikely to be much worse than today, with a heavily armed North Korea isolated from the world and paranoid about possible threats from America.