Joe Biden on North Korea: Will He Build on Donald Trump's Legacy? 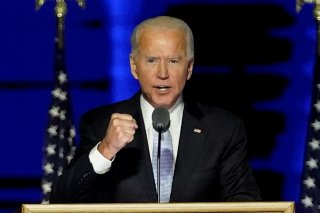 The 2020 election meant a great deal to Pyongyang, because of the very special relationship that exists between Kim Jong-un and Donald Trump. How will Biden’s apparent election victory affect relations with North Korea?

The question has profound implications. During the November 2016-January 2017 transition from President Obama to newly elected Donald Trump, Barack Obama warned that North Korea was the thorniest quagmire that the nation faced and it could easily lead to war. The situation in late 2016 was bleak. According to Watergate famed reporter Bob Woodward, in his book Fear: Trump in the White House, President Obama considered a limited pre-emptive surgical military strike because of the combination in September 2016 of North Korea conducting its fifth nuclear test and shooting a medium-range missile 1,000 kilometers into Japan’s exclusive economic zone. Japan's Prime Minister Shinzo Abe condemned the North Korean test missile that landed 150 miles off Japan's coast. "It's a serious threat against our country's security," Abe told reporters. "This is an outrageous act that cannot be tolerated."

In one of President Trump’s greatest international victories, a special relationship burgeoned between him and Kim Jong-un. However, Biden has been quite caustic in his criticism of North Korea’s leader. Biden and North Korea have engaged in an ongoing exchange of name-calling. In the most recent presidential debate, Biden called Kim Jong-un a “thug.” For their part, the North Korean media has called Biden an “imbecile” and “a rabid dog.” Biden has promised that he would continue Barack Obama’s policy toward North Korea that is dependent on North Korea promising to give up part of their nuclear arsenal before talking. However, many American political leaders are concerned, because in the past that approach brought the United States to the brink of war.

President-elect Biden has criticized the progress that has clearly been made between the two nations and this has deeply tested the patience of both Trump and Kim Jong-un. Now that Biden’s presidential election victory is confirmed, one can only hope that common sense will prevail and Biden will continue to build on the foundation of warmer relations that has been established.

Sadly, there has been an increasing tendency in America over the last twenty years to almost automatically decry the foreign policy initiatives of the President, when he has been from the opposing political party. Recently, Donald Trump was nominated for his third Nobel Peace Prize. The most recent one was for the “Trump Doctrine.” David Flint, an Australian law professor, described the reason for this most recent nomination. Flint shared, “He’s reducing America’s tendency to get involved in any and every war.” In the 1970s, 1980s, and 1990s, if the President of the United States or Secretary of State made substantial progress toward real peace, political leaders on both sides of the aisle would profusely lionize the peacemakers. Americans lavished much praise on Henry Kissinger’s shuttle diplomacy in the Middle East and President Ronald Reagan’s agreements with Mikhail Gorbachev, which ushered in the end of the Cold War.

Whatever one might think of President Trump overall, he has brought the United States from the possible brink of war with North Korea, under the Obama Administration, to something of a special relationship between Donald Trump and Kim Jong-un. Does former President-elect Biden really want to regress back to North Korean missiles landing near the coast of Japan and videotapes of North Korea nuking San Francisco? The twentieth century has often been called the “American Century.” Part of that greatness was a result of the nation’s leaders building upon the successes of previous presidents, even if they were of a different political party. One can only hope that President-elect Biden will lay the previous pejorative political rhetoric aside and build upon the progress in American-North Korean relationships that were built under the Trump Administration.