Kazianis on CNBC: The North Koreans "Don't Have any Intention of Denuclearizing." 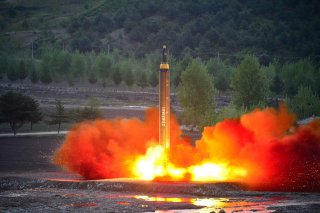 You can see his comments below during an interview last night for CNBC.

Check out an excerpt from his most recent piece in The Hill here:

With each passing day — and each new shocking revelation — it seems clear that President Donald J. Trump was duped by North Korean Dictator Kim Jong Un in Singapore.

Despite the clear warning signs, despite the fact that North Korea has never kept its word in decades of nuclear negotiations, the Trump administration decided to undertake a strategy that attempted to make Kim Jong Un feel secure, to show him that there was a better path for him and his people if he rid the world of the North's nuclear weapons program. Among the glitz and glamor of cosmopolitan Singapore, the world hoped Kim would be able to envision a new beginning, ending a threat that could have sparked a nuclear war just last year and which would have killed millions in the process.

Could we be in for another summer showdown with Pyongyang? I would say it seems now all but certain. Unless Secretary of State Mike Pompeocan pull of a miracle when he travels to North Korea this week, we should prepare for the worst.

You can read the full article here.