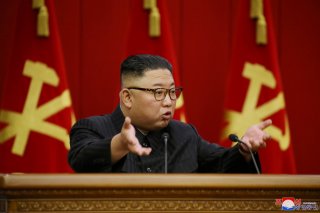 North Korea’s Kim Jong-un has stated publicly that the country is facing a food shortage, a rare admission for the country’s leader, who blamed the pandemic and a recent typhoon.

Last year, speaking at an anniversary event of the Workers’ Party of Korea, Kim urged his people to “remain firm in the face of ‘tremendous challenges’ posed by the pandemic”. One such challenge Kim has warned of is the potential for a famine echoing the “arduous march” of the late 1990s, when the country faced a period of mass starvation that reportedly killed millions.

Kim’s response to COVID-19 has made North Korea even more isolated, leading to food shortages that are likely to impact millions. His slimmer look may also indicate Kim’s own lack of access to the food he used to have.

Is North Korea on its way toward another arduous march?

North Korea was one of the first countries to respond to the COVID-19 outbreak by closing its borders in January 2020. North Korea still claims zero positive COVID-19 cases, which no one can really confirm.

There have been signs of a devastating economic situation in North Korea associated with the closed border, which entirely blocked existing illegal trades. Due to existing sanctions, there were not many legitimate trade activities in North Korea, apart from with China, but smuggling has sustained supply and demand chains in general.

At the moment, North Korea is facing its toughest international sanctions yet, imposed in 2017 over its sixth nuclear test. The first such sanctions were put in place by the UN in 2006 over North Korea’s ballistic missile tests, and were expanded when the country conducted its first nuclear test that same year.

It is believed that the COVID-19 border closure has affected the North Korean economy even more than the sanctions, resulting in a more than 50% decrease in trade with China compared to 2018.

The border closure has resulted in a lack of access to agricultural materials such as fertiliser and machinery, making it hard for North Koreans to have a sufficient grain harvest. Additionally, food imports and humanitarian aid are not being allowed due to the lockdown.

When Kim Jong-un became leader, he promised his people that they “would never have to tighten their belt again”. Now, he has decided to announce another arduous march rather than engage with the international community, risking a hit to his credibility.

There seem to be two main reasons why North Korea is hesitant to reopen its borders while people suffer from serious lack of food nationwide.

First, there is a huge risk of a COVID-19 outbreak with current measures. The country lacks capacity to deal with the pandemic, so massive and effective vaccination will be the only solution for North Korea to control the spread of the virus in the country. North Korea was initially approved to receive nearly 2 million doses of AstraZeneca vaccines from Covax, the global vaccination distribution programme. However, this number has been reduced to 1.7 million which covers only about 3.3% of its entire population.

On top of this, delivery has been delayed as North Korea did not participate in the required consultation process. The international community seems to be ready to provide more vaccines once Kim agrees to cooperate on vaccine supply.

The second reason why Kim is willing to risk his credibility over accepting international aid is his fear of continuous information influx.

During the first arduous march, North Korean political leaders observed humanitarian workers sharing external information with local people, which was then prohibited by authorities. However, this was not a significant problem for leadership as ordinary North Koreans did not have access to the outside world, and were effectively brainwashed by state propaganda.

This time, North Koreans have more access than ever to the outside world. They have wider use of mobile phones, and USBs and SD cards containing K-Pop and South Korean films and dramas have been smuggled into the daily life of North Koreans through jangmadang (grey markets – literally, “outdoor market” in Korean). Higher levels of information influx combined with less ideology education has caused people to rethink their regime, and domestic discontent has developed as a result.

Jangmadang became a core part of North Koreans’ survival system when the government was unable to provide rations and necessities during the 1990s. For the jangmadang generation, daily life survival was more important than regime survival. They could not attend school, and thus were not subject to intense state ideology education. Jangmadang and younger generations now tend to place more value on money and South Korean cultural influence than Jucheism – North Korean state ideology – weakening their loyalty to the regime.

Fortunately for Kim, this phenomenon has slowed due to the current border closure. But once the border is reopened, there will be a surge of information into the country again. Thus, Kim would want to ensure the revival of strong state ideology before he reopens doors to the international community. He has conducted strong punishments against those who possess and/or spread foreign media among people, and emphasised the need for enhanced ideological education. In April, Kim sent a letter to the Youth League aiming to “root out anti-socialist and non-socialist practices, and improve ideological education”.

Kim’s isolation may have successfully blocked the spread of COVID-19 and external cultural influence among the population, but it has also blocked the channels to basic necessity. Kim will need to reopen the borders in order to avert the second arduous march, but it will be hard for him to find immediate alternatives to mitigate the risks to his regime.

There are signs of gradual resumption of trade between North Korea and China, but it has been limited. As Kim has announced that North Korea needs to prepare for “both dialogue and confrontation” with the US, the international community could take this as an opportunity to approach North Korea again, but with more productive and practical solutions for its isolated people.