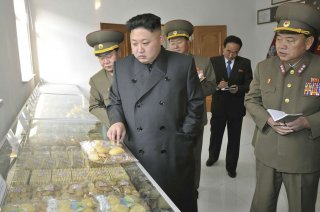 North Korean leader Kim Jon-un acknowledged his country’s difficult food situation while speaking at a meeting of the Central Committee of the Workers’ Party of Korea.

North Korean state media reported on the decision to convene a plenary meeting of the party’s central committee earlier this month, with Kim Jong-un attending preparatory meetings with top party officials in the politburo during which he discussed the need to “solve pending problems urgent for the economic work and the people’s living,” adding that North Korea faces “challenges and restrictions due to the prevailing unfavorable subjective and objective conditions and environment.” In addition, Kim reportedly briefed officials on “his plan to bring about a substantial change in the economic work of the state and the stabilization of the people’s living,” according to state media.

With the larger plenary meeting now underway, Kim told the assembled party officials that the country’s food situation was in a difficult spot following failures in the agricultural sector in the aftermath of severe weather events last year.

“The people’s food situation is now getting tense as the agricultural sector failed to fulfill its grain production plan due to the damage by typhoon last year,” said Kim, with state media also reporting that “the issue of directing all efforts to farming this year,” would be a major topic of focus as the plenary meeting moves forward.

Last year, North Korea experienced a series of deadly typhoons that caused significant damage to crops, rice paddies, and irrigation systems as well as to critical infrastructures such as roads and bridges, while a particularly long monsoon season brought with it flooding that resulted in more damage to crops. North Korea’s food situation has also deteriorated as a result of the ongoing coronavirus pandemic, with the country’s stringent lockdowns and border closures proving detrimental to grain imports.

Food insecurity was already a concern prior to the pandemic and the serious weather events, North Korea is now facing a grain shortage of up to 1.35 million tons while the gap between overall food supply and demand could be as much as 860,000 tons.

While experts point out that North Korea frequently experiences grain shortages, they also note that the DPRK will be unable to overcome such a shortage this year through grain imports. North Korea is unlikely to be able to rely on domestic food production to make up for lost imports, with agricultural issues becoming a concern. The country may be experiencing difficulties with its corn harvest, for example, stemming from a lack of both material and manpower.

Prices for staple foods such as rice and corn have reportedly been on the rise in recent weeks within the country, with rice alone seeing a 22 percent price increase in the days between June 2 and June 8 in Pyongyang.