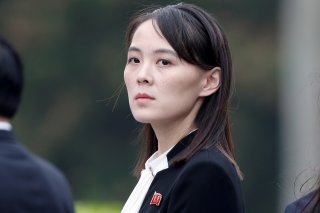 Earlier this week, both North Korea and South Korea tested missiles. When South Korea launched theirs, a submarine-launched ballistic missile (SLBM), it led to an outraged reaction from  Kim Yo-jong, the sister of North Korean leader Kim Jong-un.

"If even the 'president' supports the act of faulting and hurting the dialogue partner, it will naturally result in a corresponding action and then the north-south relations will end up in a total deadlock,” Kim Yo-Jong said in a statement, as reported by the Yonhap News Agency.

The comments came after South Korean President Moon Jae-in personally attended the SLBM launch, and described the launch as a potential deterrent against provocation by the North Koreans.

Meanwhile, a subsequent Yonhap story noted that Kim Yo-Jong’s statement had not been carried by most North Korean state media, including the Rodong Sinmun newspaper and the Korean Central Broadcasting Station.

“North Korea's direct criticism of our president is not beneficial at all in improving inter-Korean relations and bringing peace on the Korean Peninsula,” a spokeswoman for the South Korean unification ministry told Yonhap this week.

According to Bloomberg News, North Korea has since released a video of a new stem for launching missiles from trains.

“The video starts with a shot from a drone flying over train tracks that lead into a tunnel,” the Bloomberg description of the video said. “From there, two reddish-bronze train carriages emerge pushed by a locomotive. The airborne drone footage captures men in what appear to be matching beige jumpsuits leaving a carriage, while the roof from one carriage is retracted and a missile rises.”

The same piece noted that Kim Yo-Jong has likely had a change from her previous role in the regime’s propaganda department, judging by the statement about South Korea’s launch.

Back in January, this author called for a meeting between Vice President Kamala Harris and Kim Yo Jong.

“Given what we have seen in the last four years, realizing the near-impossible task of denuclearization after the Biden administration takes office will require a new and creative approach to the problem,” Seong-Chang Cheong, a fellow at the Wilson Center’s Asia Program and senior research fellow at the Sejong Institute in the Republic of Korea, wrote. “I am of the view that Vice President Kamala Harris should be given full authority to sit down and negotiate with her counterpart, Kim Yo-jong, the de facto number two in the North Korean power hierarchy. I believe this would be a good idea for a number of reasons.”

These included that Kim Yo-Jong appears to have established herself as the number two in the administration and that the experience of the diplomatic opening during the Trump Administration indicates that the new approach is needed.