The Korean War Started the Trend of Endless Wars for America. How Do We Change Course? 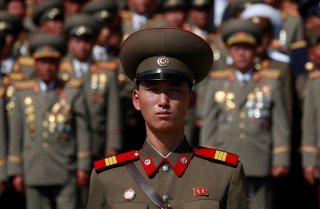 This year marks the 70th anniversary of the start of the Korean War, a conflict that has outlived most who fought in it. The average age of the Korean War veteran who fought alongside the United Nations is 88. Dubbed a “police action” by President Harry Truman, the Korean War was not as light-touch as its legal name might suggest. Five million soldiers and civilians died, of which nearly 40,000 Americans died and more than 100,000 were wounded. Today, 28,500 U.S. troops remain stationed in South Korea, and the threat of the war resuming looms over 76 million Korean people on both sides of the 38th parallel.

Bookended by World War II and the Vietnam War, the Korean War is commonly referred to as the “Forgotten War.” But its legacy has been deeply consequential, not just for veterans who fought in the conflict but for American foreign policy. As the originator of endless war, the Korean War marked the beginning of an untransparent U.S. foreign policy and the revitalization of the national security state post-World War II.

Importantly, there are growing signs that public opinion is moving away from open-ended conflicts, as seen in the public opinion poll supporting President Trump’s decision to withdraw U.S. troops from Syria. In April 2020, a poll conducted by Concerned Veterans for America found that 73% of veterans support a full withdrawal of American military forces from Afghanistan, up from 60% last year. And in May, 51 groups, including the Quincy Institute, called on Vice President Biden to “end our endless wars and adopt a new approach to international relations.” If these calls continue, it is possible that five years from now, the Korean War will finally have ended, at least for America's side in the form of a presidential declaration, with a multilateral peace treaty underway.

For this to happen, the foreign policy elite in Washington must feel compelled to change. The notion that somehow the United States alone can provide security in East Asia is outdated and counterproductive. Unfortunately, this is still a widely shared view among the establishment, which cuts across partisan lines. In 2025, whether a Republican or a Democrat controls the White House will matter less than the American public’s perception of endless wars and how elected officials in Congress are held accountable for sending American troops overseas.

The United States is not equipped to solve every global problem. No nation is. In the case of the Korean War, our failure to close that chapter of history has allowed mistrust to fester for so long that détente seems impossible, despite the fact that lowering tensions would protect U.S. interests in the region better than the status quo. Ending the seven-decades long conflict could help transform the security environment in Northeast Asia as well as usher more progress in areas of mutual concern, such as public health and climate change.

To get there, saner voices must prevail. One needs to look no further than John Bolton’s book where he reportedly downplayed North Korea’s offer to dismantle the Yongbyon nuclear facility to grasp the importance that experts, rather than ideological political appointees, manage U.S. interests abroad. Summits are important, but so are smart engagement and experienced diplomacy. In times of pandemics and economic hardship at home, a grand strategy of global military primacy, or “Liberal Hegemony,” no longer makes sense, least of all on the Korean Peninsula, home to one of the wealthiest countries in the world. A more restrained foreign policy based on pragmatism and cooperation could lead to the closing of this chapter of American warfare and better safeguarding of the United States' fundamental strategic interests in Asia.

Jessica J. Lee is a Senior Research Fellow in the East Asia Program at the Quincy Institute for Responsible Statecraft.