Looking Through the Eyes of North Korea: Gaming Out Kim Jong-Un's Coming 'Provocation' 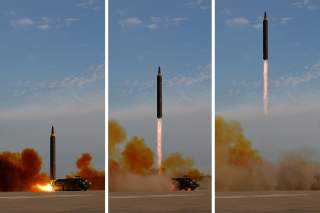 With talk about countermeasures, “dotards,” end-of-year deadlines, and “definite” decisions, the scene is set for some kind of serious North Korean provocation in the next several weeks. We just don’t know what that provocation will be.

Some people have their minds made up. There is a general consensus in the Korea policy community and the commentariat that when Kim Jong-un speaks about “a new way,” he is suggesting a return to the ICBM and/or nuclear testing that predominated before he started writing letters to President Donald Trump. Activity at the Sohae Satellite Launching Station on December 7 has led renowned missile specialists like the International Institute for Strategic Studies’ Michael Elleman to assess that a ballistic missile or satellite test may happen in the not-so-distant future. There have even been innuendo about an atmospheric nuclear explosion, an event that would make policymakers in Washington, Seoul, and Tokyo extremely nervous.

Something is clearly up. An acceleration of E-8C surveillance flights over the Korean Peninsula wouldn’t be the trend if the U.S. military wasn’t anticipating some kind of response from the North Koreans during or shortly after the holiday season. But sitting here in New York City, 6,800 miles away from the North Korean capital and devoid of much inside access, I continue to believe the “Christmas gift” Kim Jong-un is talking about will be far less dramatic than many prognosticators expect.

I say this with some reservation—both because the Kim regime can make even the most knowledge Korea analysts look silly and because there is a lot we don’t know about Kim’s motivations (anybody who is confident in their predictions is either supremely mesmerized by their own ego or is selling an empty bag of goods). But let’s take a step back and try to see the world from where Kim is sitting at this particular time.

Right now, things are a mixed-bag for the North Korean leader. On the one hand, the personal relationship he has nurtured with Trump over the previous 18 months has gotten him very little in terms of deliverables. The economic sanctions remain in place. New sanctions through the 2020 National Defense Authorization Act will soon be signed into law by the president. Despite the cancellation of some of the larger joint exercises, the U.S.-South Korean military-to-military relationship is as solid as a Seoul skyscraper. Handshakes and pictures aside, there has been no official normalization in bilateral U.S.-North Korea relations. Diplomatic channels of communication are fleeting and depend almost entirely on the two leaders at the top. If at the beginning of the process Kim thought he would steamroll or charm Trump into making a deal on Pyongyang’s terms, he has come to learn that the U.S. president isn’t as much of a pushover as he first thought.

Kim’s patience with the Americans has run out and he feels an urge to demonstrate to Washington how impatient he is.

Yet the scion of the Kim family also has to be careful about the decision he makes. At present, the broader regional dynamics over the past year have been quite kind to the North Koreans. Summits with China’s Xi Jinping and Russia’s Vladimir Putin in 2019 have allowed Kim to diversify North Korea’s relationships while sending a message to Washington that it’s not the only game in town. While those summits failed to produce much on paper, they have turned the table somewhat in terms of public opinion. Justified or not, the North is no longer stereotyped exclusively as the problem child preventing diplomatic progress. Ask the Chinese and the Russians why negotiations between Washington and Pyongyang have been gridlocked since the Hanoi summit, and you are likely to receive an answer that faults the U.S. for being excessively stubborn. Whether Beijing or Moscow actually believes this or is using the North Korea file to poke Washington in the ribs is irrelevant; for Kim, the result is the same.

Currently, the Kim regime is relatively safe from the imposition of additional U.N. Security Council sanctions. During the Security Council session this week, the Chinese and Russian delegations were speechifying about the need to relax the sanctions, not to reinforce or strengthen them. Beijing called sanctions easing “imperative” to keep the U.S.-North Korea talks alive, while the Russians lectured the U.S. and its European allies on their opposition to presenting a reasonable proposal that Pyongyang could work with. If Kim doesn’t do anything stupid, the Security Council will remain inhospitable terrain for any new sanctions push.

However, all of this could go out the window if Kim Jong-un greets the New Year with an ICBM launch. Much of the goodwill Kim built up with Beijing and Moscow would evaporate, dragging his regime back to outlaw status at the Security Council overnight. The risk is exponentially greater if the Christmas gift Kim is promising takes the form of a nuclear test.  Indeed, if there is any provocation China and Russia won’t put up with, it’s a nuclear test.

Assuming Kim Jong-un hasn’t overestimated his position, he will likely calibrate his “new path” in the hope of minimizing the consequences. Being bold is one thing. Being dumb is another.

We may yet see a North Korean satellite fly into the sky. While an ICBM test is not out of the realm of possibility, it would jeopardize all of the diplomatic momentum Pyongyang has achieved with such tenacity and skill.