Looks Like North Korea’s Getting Ready for Major Missile Tests 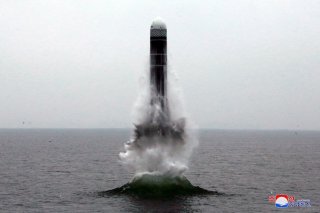 There are signs North Korea is preparing to resume flight tests of long-range, nuclear-capable rockets.

The signs are evident in satellite imagery of the North Korean regime’s Sinpo test site. On April 4 and 5, 2020, commercial satellites photographed the test stand at Sinpo several times.

The images appear to reveal preparations for a so-called “pop-up test” of a large rocket, Jeffrey Lewis, a nuclear expert at the Middlebury Institute of International Studies at Monterey, explained in a series of tweets.

“In a pop-up test, a missile is ejected from a canister or a silo using compressed gas,” Lewis explained. “The missile either has no propellant, the propellant does ignite or it burns for only a very short time. This step precedes flight-testing of the missile.”

Comparing images from April 4 and April 5, 2020, appears to show testers readying Sinpo for a pop-up test. “Situation is normal on April 4,” Lewis explained. “On the morning of April 5, the support structure is pulled back, a crane has appeared and the [erector] arm is up. By the afternoon, the big crane seems gone and the arm is back down.”

Similar preparations were evident in May 2017, right before a round of pop-up tests that apparently supported the development of North Korea’s Pukguksong-3 submarine-launched ballistic missile, Lewis tweeted.

“So what's (popping) up?” Lewis joked. “One possibility is that North Korea is in the very early stages of testing a new missile that will be launched from a canister.”

“Still, it could be months before North Korea finishes pop-up testing at Sinpo, then months more before it flight tests whatever is under development there,” Lewis noted.

North Korean leader Kim Jong Un in 2018 agreed to halt some missile-testing as a gesture of goodwill toward U.S. President Donald Trump, but testing of sea-based missiles and shorter-range land-based missiles has continued.

North Korea tested at least one medium-range ballistic missile in October 2019. The test came just hours after Pyongyang announced it would resume talks with the United States on the subject of the hermit state’s nuclear-weapons program.

Kim and Trump last met in June 2019 at the demilitarized zone separating North and South Korea. Prior to that, Kim and Trump met in Hanoi in February 2019 and Singapore in June 2018.

None of the talks resulted in any meaningful slowing of North Korea’s efforts to build up and improve its atomic arsenal. Pyongyang apparently possesses an arsenal of several dozen nuclear warheads plus a variety of short-, medium- and long-range ballistic missiles that are capable of delivering them.

North Korea also is developing a ballistic-missile submarine and a submarine-launched missile to go with it, potentially adding a survivable at-sea nuclear capability to reinforce its more-vulnerable land-based arsenal.

The Oct. 1, 2019 launch was the first test of a missile designed to deliver a strategic nuclear payload since the Nov. 28, 2017 test of the Hwasong-15, an intercontinental-range, land-based missile.

If North Korea does resume major testing of larger rockets, it’s unclear exactly what this will mean for the country’s deterrent and the prospects of a lasting peace.

“The possibilities are disturbing,” Lewis tweeted. “So, here's a thought! How about we remove some sanctions, persuade Kim to extend the moratorium on testing, and NOT FIND OUT?”