Is Moon Jae-in Giving Up on North Korea? 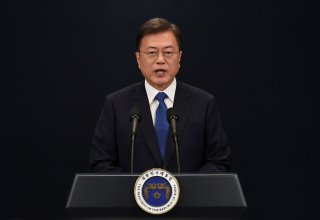 Coming off a resounding win in last month’s parliamentary elections, where his party captured 60% of the seats, South Korean President Moon Jae-in marked the third anniversary of his 2017 inauguration this weekend with a national address. Moon did what any national leader would do during a global pandemic—he discussed about his government intended to get the country out of a major public health disaster and outlined plans for rebuilding the economy in a post-coronavirus world. Moon trumpeted South Korea’s scientific and technological capability, strengths Seoul can legitimately brag about given its relative success with mitigating the spread of the virus.

What was most notable from Moon’s speech, however, was what he didn’t talk about. The South Korean president and former peace campaigner devoted next to nothing on North Korea or inter-Korean peninsular issues. Indeed, in remarks that clocked in at 2,799 words, Moon devoted a 24-word sentence—roughly 0.8% of the entire address—to anything that could be construed as touching upon his inter-Korean peace agenda. What he did devote to the subject was non-substantive and dominated with flowery language: “I hope that South and North Korea will move toward a single community of life and a peace community by cooperating on human security.”

His press conference after the speech could hardly be construed as substantive, either. When Moon got around to discussing inter-Korean initiatives, he largely reiterated what he has said on countless occasions in the past—the two Koreas should do what they can to move the ball forward. The U.S.-North Korea denuclearization negotiations and the inter-Korean peace track must be separated, he insisted, lest the former kill the latter. Regrettably, that point may have been reached a long time ago.

It’s hard not to feel sorry for Moon. Here is a man who was elected in 2017 with grand visions, not only for the South Korean people but for the entire region. He came into the Blue House with dreams about completely transforming the Korean Peninsula from a highly tense area that was always a hair-trigger’s away from war to a tranquil, vibrant growth engine in East Asia. Moon is as much an activist as he is a politician, someone who never bought into the notion that North and South Korea were destined to be enemies forever.

For a time, it appeared as if Moon’s peace gamble with the North was making visible dividends. In 2018, he met North Korean leader Kim Jong-un on three separate occasions, all of which made international headlines as the two clasped hands and smiled at one another as if they were long-lost brothers. The third meeting in September 2018 even resulted in a comprehensive military accord between Seoul and Pyongyang, a noble attempt to deescalate the highly militarized DMZ by establishing regular military-to-military communications, establishing a joint liaison office, destroying guard towers on both sides of the line, and prohibiting any military exercises or maneuvers within 5km of the border. Three months later, South and North Korean troops were seen peacefully crossing the contact line, verifying the destruction of front-line guard posts, and sharing cigarets as they chatted amicably with one another.

17 months later, the situation could hardly be more different.  The inter-Korean dialogue Moon staked his political legacy on is, frankly, going nowhere.  With the exception of a short meeting between Kim and Moon in June 2019 and a few pleasant messages back-and-forth, inter-Korean reconciliation—let alone a full peace agreement—is stuck in the doldrums.  While Seoul continues to hold out hope by announcing new inter-Korean railway construction and sending constant overtures on joint overtures to North Korean officials, Pyongyang has been in no mood to reciprocate. Hope that the coronavirus would melt the ice and force the two long-time adversaries to cooperate on behalf of a shared goal has proven misplaced.  If there is communication in the bilateral relationship today, the words going back and forth are far more likely to be nasty than complimentary. On May 8, a North Korean military representative condemned the South for air force drills. "Everything is now going back to the starting point before the north-south summit meeting in 2018,” the representative said in the statement.  Increasingly, it often feels like that 2018 summit meeting never happened.

Can Moon Jae-in do anything to resurrect his peace campaign?  The answer is yes, but he simply can’t do it alone. Whether the peace process can be saved depends on multiple factors out of his control, including the Kim regime’s willingness to pick up when the phone is ringing and the Trump administration’s ability to recognize that establishing a durable and verifiable peace regime on the Korean Peninsula is as much of an achievement—perhaps even more so—as denuclearization.

Moon will continue to keep hope alive. But as he gets closer to his presidential term ending, it may turn out that Moon-Kim summitry in 2018 was no more successful than Kim Dae-jung's overtures two decades earlier.