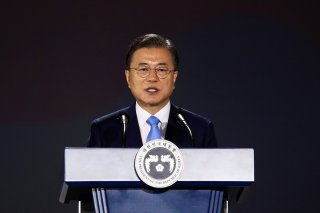 In the U.S. presidential election, the candidates have sparred, especially in the second presidential debate, about the Green New Deal. Mostly, the argument has entailed President Donald Trump assailing Vice President Joseph Biden for supposedly supporting the version of the Green New Deal introduced three years by Rep. Alexandria Ocasio-Cortez and other Congressional progressives, and Biden claiming that he in fact supports his own plan, which is different.

Such a package, in the having bene, seems only likely to pass if Biden wins the presidential election and brings with him an overwhelming Democratic majority in both houses of Congress, and even then it’s not entirely clear that it would become a reality. The European Union has also, of late, proposed a Green New Deal of its own.

It’s called the Korean New Deal, or the K-New Deal, and it actually has two components: the Green New Deal and the Digital New Deal. Both have been proposed by the administration of  President Moon Jae-in and the ruling Democratic Party of Korea (DPK.) The proposals have followed an election victory this past spring by Moon’s party, which now holds a supermajority in the National Assembly. That election was the first major national election in the world since the start of the pandemic.

The introduction of the initiative came after South Korea was widely praised around the world for its containing of its coronavirus pandemic, although the county nevertheless underwent an economic contraction this year.

The main goals of the Korean New Deal include reaching carbon neutrality by 2050, ending the financing of coal plants, a carbon tax, major investments in renewable energy, and further emphasis on moving forward with a digitized economy.

“I’d like to clarify the meaning and direction of the Korean version of the New Deal as a national project to stay ahead in the post-COVID-19 era,” Moon said June 1 at an Emergency Council meeting, per his English language website.

“This Korean New Deal is a new national development strategy to leap from being a fast-follower to a pace-setter. In the belief that our country’s future hinges on it, we will resolutely push ahead with the Korean New Deal, which will erect two pillars having been a Digital New Deal and Green New Deal – side by side atop the foundation of an inclusive nation and of values that put people first. In the process of transforming our fast-follower model economy into a pace-setting one, we will open up new opportunities for creating a great number of new jobs.”

Moon added that both New Deals are designed “for people.”

"We will increase investment in people for an inclusive digital economy, for instance, by fostering professionals and providing training for new jobs as well as offering employment related support – all while extensively expanding the employment safety net, including laying the foundation for universal employment insurance.”

It’s not expected that Moon will have much trouble passing the law legislatively.

"President Moon's Democratic Party won an overwhelming parliamentary majority in the April elections, so is unlikely to have trouble pursuing its objectives from a parliamentary perspective, at least for the next 2 years,” explained Elizabeth Thurbon, an associate professor of International Relations at UNSW in Australia, who has written about the Korean New Deal.

Moon, this week, reiterated the pledge to achieve carbon neutrality in 30 years, per The Guardian. There had been some criticism that the government had been less than solid about promising carbon neutrality by the 2050 date, but Moon now says south Korea will join Japan and China in vowing to zero out carbon emissions, although China says it will take until 2060 to deliver on that particular goal.

“While the government has been strongly pushing for energy transitional policies, Moon said this week, per Bloomberg News. “We will create jobs and build new markets and industries by transferring coal power generation to renewables.”

What About the Cost?

The cost of the expansive initiative will come from public expenditures, from both national and local governments, and from some private investment.

"Korea's Green New Deal is hugely ambitious - like most of Korea's previous national economic strategies,” Thurbon said.  “It will be important to carefully monitor progress on both the economic and environmental front. But the government's seriousness of ambition is reflected in the massive investments associated with the deal, and the concrete goals set in terms of carbon reduction - including the most recent goal of net zero by 2050. Moreover, President Moon will be personally chairing a monthly meeting to review progress and understand and resolve obstacles. So while there will certainly be obstacles to be overcome, there is cause for cautious optimism."

Nikkei Asia has pegged the cost of the overall Korean New Deal project at 60 trillion won, the equivalent of $138 billion. Analysts expressed some skepticism.

"After the failure of his of 'income-driven growth' economic policy, Moon's next economic plan had to be something big to offset previous mistakes and build a lasting legacy," Paul Choi, a senior Korea analyst at CLSA, told Nikkei. Choi’s firm describes the plan as “Moon's Hail Mary New Deal.”

"We remain cautious, mainly due to the uncertainties around the profitability and sustainability of these projects, which are critical factors to induce private-sector participation," said Marie Kim, said in the Nikkei piece. "Relaxing the government's heavy regulation is key, and utilizing well the efficiency of the private sector is also important for the ultimate success of the plan.”

A Korea Herald story earlier this month quoted Moon as saying that Korean New Deal will focus at the start on smaller projects.

“In order to further clarify the idea, ‘balanced new deal’ will be added as a fundamental principle in addition to Digital New Deal, Green New Deal and strong social security net,”  Moon told government ministers at a meeting in mid-October. “It is the government’s firm resolve to dynamically change Korea starting from the provinces.”

The Australian newspaper The Conversation, last month, praised the South Korea plan, as preferable to the other measures taken for post-pandemic economic relief by other countries, including Australia itself.

“Throughout the developed world, many voices are calling for a green-led recovery. South Korea stands out for its decisiveness, despite some valid criticism of its approach. Its Green New Deal is an opportunity to build the high-tech, high-wage green industries of the future, with massive export and job creation potential,” the Conversation piece concluded.

A piece in the Korea Herald by Kim Yong-beom, the first vice minister of economy and finance in South Korea’s government, described the Green New Deal proposal as “certainly a meaningful start toward the systemic overhaul to transform Korea into a green economy, but there is no question about the long journey ahead. We have been late to get started in the response to climate change. However, thinking back to the industrialization period, I am confident that Korea can leap ahead to lead the global paradigm shift to sustainable growth.”

An opinion piece in Eco-Business in late July expressed some skepticism about the plan, with the South Korean government having been criticized in the past for not following through on such plans. A previous government, in 2008, had pursued a “Low-carbon Green Growth strategy,” before running into the Great Recession that began that year. That government was also accused of “greenwashing,” in that it also included traditional construction schemes. Other projects in the past in that country, such as its Clean Diesel Policy, are widely seen as failed boondoggles.

A piece in The Diplomat, by Sam McDonald of the Korean Federation for Environmental Movements, in August echoed those concerns.

The new policies, the piece said, “is not South Korea’s first ambitious environmental plan, and as in the past corporate interests seem to be overshadowing those of the environment. The government once again risks locking the country into decade-long projects that may prove to be environmentally and economically unsustainable.”

The Diplomat raised concerns about the plan to replace coal power with that of liquified natural gas (LNG), as LNG can also release greenhouse gas into the air.

The plan also “risks sinking billions into gas plants that future governments will need to prematurely shutter if they hope to meet not only the target of the Paris Agreement to limit global warming to 2 degrees Celsius, but also the 2050 target for net-zero emissions set by Moon’s own party.”

“South Korea is finally one step closer to aligning itself with the reduction pathway compatible with Paris climate agreement goals,” Joojin Kim, managing director of the Seoul-based NGO Solutions for Our Climate, said in a statement, per The Guardian.