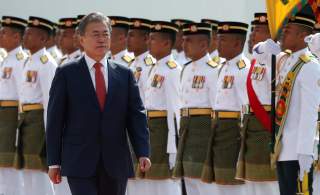 One of the great ironies of the inter-Korean détente process of the last twenty-six months is the Americanization of it. South Korean president Moon Jae-in has met North Korean leader Kim Jong-un four times already. Moon has spent decades of his political life preparing for this effort. Moreover, the issues are most critical, of course, for the people who live on the Korean Peninsula. Yet much of the debate has been dominated by President Donald Trump’s erratic outreach to Kim.

This is both unfortunate and predictable. Unfortunate because it sidelines South Koreans from the most important policy issue facing their country. And predictable because of Trump’s capacious personality. Trump has a well-established tendency to make policy issues into personal psycho-dramas in which we are all spectators. As South Korea’s primary security partner, U.S. engagement was always required, but under a more traditional president, the South Koreans likely would have led this more clearly. As it is, under Trump, the South Korean news services are often reduced to translating his tweets on the evening news and hosting panel discussions to divine what Trump meant.

Moon has taken some criticism for this. There is a clear hankering on both left and right here to take control of this process. South Koreans are slowly grasping Trump’s mixed motives and poor knowledge of the actual issues of denuclearization here; there was much laughter when it was revealed that Trump strong-armed Japanese prime minister Shinzo Abe into nominating him for a Nobel Peace Prize for his Korean efforts.

Moon’s time has now come. The Hanoi summit between Trump and Kim this month collapsed. No one is quite sure what to make of it. There is much confusion, with hardliners on both sides jockeying with doves. North Korea gave that unique press conference to push back on Trump’s interpretation of Hanoi, while National Security Advisor John Bolton and Secretary of State Mike Pompeo seem to be sparing over how toughly to proceed.

This is an ideal chance for Moon to step up and reconcile all parties with a major initiative. But Moon faces growing challenges at home. His approval rating has slipped significantly, from over 80 percent, when he pushed back on Trump’s 2017 war threats, to around 45 percent now. Much of this is due to the economy. South Korean unemployment has recently spiked. But an element is also Moon’s continuing vagaries on North Korea coupled to grandiose rhetoric.

Moon has promised a revolution in inter-Korean affairs. The hype here has been enormous. I have seen books for Moon’s speeches about “a new era of peace” available for purchase at gas stations even. Yet Moon has been disturbing short on specifics. This was understandable a year ago when détente was just beginning during the Olympics. But now, it is becoming harder and harder to determine what exactly Moon’s goals are and his strategy to get there. This would be less troublesome were it not for the soaring rhetoric, leading even to another round of unification hype.

In practice, Moon’s primary initiatives seem to be re-opening inter-Korean economic projects—namely, tourism at Diamond Mountain and the inter-Korean export processing zone at Kaesong in North Korea—and rolling back international sanctions on the North. Both of these efforts are controversial. The site closures stem from issues still unresolved. For instance, a South Korean tourist was shot at Diamond Mountain and Pyongyang habitually threatened Kaesong with arbitrary demands. No apology or acceptance of responsibility of the former event was ever given, nor is it clear that North Korean behavior regarding Kaesong will be any different than before.

Furthermore, the effort to rollback sanctions is even more debatable, given that they represent the collective will of the international community to punish North Korea for openly violating UN Security Council resolutions against its nuclear and missile programs. The South Korean left has long looked at global sanctions against the North as an ignorable foreign intrusion into Korean affairs. Moon’s constant pushing on the sanctions regime has also riled allies and provoked domestic opposition.

Additionally, there is Moon’s real achilles’ heel. Moon has done little to groom and build domestic consensus inside South Korea for his outreach. Granted, South Korea is highly presidentialized, and Moon has taken advantage of that to push his détente effort with little outreach to other stakeholders in South Korea. But the legislature has complained that Moon has not shared information with them and the conservative opposition party has been so cut out that the South Korean right is now spawning conspiracy theories that Moon is a tool of Pyongyang. Moon has also insisted that his agreements with North Korea do not require formal legislative approval.

Proponents will argue that Moon has a unique window to push through change and should not dither. They will also claim that South Korean presidents routinely govern in this monarchic manner. The latter is indeed the case, but Moon promised a revolution in politics which his similarly haughty predecessors did not. Dramatically changing relations with North Korea—to the point of renewed talk of unification—is not the same as ramming through yet another infrastructure white elephant. Moon’s initiatives—if successful—cut to the core of South Korean sovereignty. This is the reason for the very sharp response from South Korean conservatives.

Moon may indeed be right about his detente, but South Korea is a democracy. For a political change of this scale, Moon needs public support and at least some buy-in from the right, which is now digging in its heels. Without it, Moon—who campaigned as a democrat who would open up closed South Korean politics—will be damned as yet another unaccountable president. As a result, when the unsolicited, ignored conservatives return to power, they will undo all of Moon’s efforts. Moon can lead where Trump has failed, but he needs to rally a national consensus—reaching beyond just his coalition—to sustain an outreach of this magnitude.