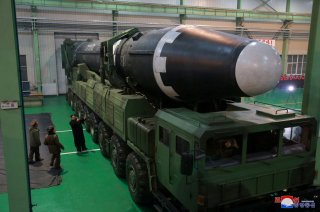 While celebrating the seventy-fifth anniversary of the Korean Workers’ Party on October 10, 2020, North Korea paraded a new nuclear missile so huge the weapon is still often referred to as the “monster missile” instead of its presumed designation of Hwasong-16.

As you can see in this news clip, the mega-missile—estimated to measure 24 to 26 meters long, roughly 40 percent longer than a silo-based U.S. Minuteman III ICBM—required a twenty-two wheel transporter-erector-launcher (TEL) truck to roll down the streets of Pyongyang, possibly making it the largest road-mobile missile ever.

In fact, some experts see North Korea’s evident ability to clandestinely acquire the necessary parts abroad to manufacture the Hwasong-16’s TEL truck may be a bigger deal than the missile itself. North Korea also debuted a new Pukguksong-4 submarine-launched ballistic missile for its domestic Sinpo-C ballistic missile submarine at the event.

But why did North Korea develop a bulkier, more expensive missile when its Hwasong-15 intercontinental ballistic missile (ICBM) already demonstrated sufficient range to strike across the United States with a nuclear payload?

The way many nuclear arms experts see it, most likely the Hwasong-16’s girth is intended to allow it to carry and release multiple nuclear warheads so as to overwhelm the United States’ strategic missile defense system.

North Korea has yet to test-launch a Hwasong-16, so it’s far from clear whether the new design is functional and mature.

Some analysts point out the parade appearance may have been primarily for spectacle and political signaling using a system far from completing development. After all, North Korea’s ICBMs don’t need to win wars, just convince Washington they could inflict unacceptable damage.

But presenting a convincing threat is a sticking point because North Korea has paraded false mockups of missiles in the past. Pyongyang will therefore want to conduct flight tests of a genuine missile, both to know if the missile works—and to let the world know too.

If the Hwasong-16 is not just for show, then the rocket’s large diameter (estimated 2.4 to 2.9 meters) compared to the Hwasong-15 is likely intended to carry a larger payload, as the latter already exhibits adequate range.

That could mean a higher-yield warhead—possibly up to 1 megaton according to one analyst—with a greater destructive radius.

But most experts think it’s more likely the monster missile is meant to release three or four nuclear warheads as well as decoys. That would multiply the number of targets the United States’ GMD defense system would have to defeat with its forty-four interceptor missiles—several of which would likely be fired to reliably take out one incoming nuke.

China, France, Russia, and the United States currently deploy Multiple Independently-targetable Reentry Vehicles (MIRVs) on ballistic missiles which can precisely strike separate targets. MIRVs may be especially desirable for preemptive counterforce attacks aimed at disabling an enemy’s nuclear forces, as one missile can unleash warheads to destroy many targets. For example, a U.S. submarine-launched Trident II D5 missile can release up to fourteen reentry vehicles each with a yield of 90 to 100 kilotons aimed at a different target.

However, experts doubt that North Korea has the technical capability to adequately miniaturize the rocket-boosted “buses” and nuclear warheads required for MIRVs. The Hwasong-16’s sheer size allows some slack on miniaturization, but only to a point.

Instead, experts argue it’s more plausible the missiles use Multiple Reentry Vehicles (MRVs), a predecessor to MIRVs deployed on early Polaris A3 and R-27U submarine-launched missiles, and land-based R-36P ICBMs. A missile armed with MRVs releases a shotgun spray of nuclear warheads aimed around just one target.

MRVs lack the precision to be a good counterforce weapon but still confound missile defenses by presenting multiple threats and could prove highly destructive for countervalue nuclear missions—ie. attacks on population and economic centers.

Unfortunately, an ICBM releases its MRVs relatively early after achieving peak velocity, meaning the U.S. GMD system is unlikely to intercept it before separation. Perhaps a hypothetical boost-phase interceptor could take out an MRV-laden missile before separation, but the viable targeting window would be very narrow, and the presumably air- or sea-based launch platform would likely have to deploy dangerously close to the launch site.

Arms control expert Jeffrey Lewis tweeted, “The point is that North Korea is clearly aimed at overwhelming the US missile defense system in Alaska. This is completely predictable because it’s much cheaper for North Korea to add warheads than for the US to add interceptors. If each new North Korean ICBM can carry 3-4 warheads, we would need about 12-16 interceptors for each missile. (The GMD system salvo fires four interceptors at each warhead.).”

Currently, the United States is expected to spend nearly $18 billion (mostly on R&D) to add just twenty-one more advanced interceptors to the missile defense system, for a total of sixty-five. To be fair, these Next Generation Interceptors may be effective enough to reduce the number launched to two interceptors per target.

Despite the advantages, big missiles laden with multiple nukes have downsides for North Korea.

Xu Tianran writes at Bulletin of Atomic Scientists that a higher quantity of valuable fissile material is required for three small nukes than one big warhead of equivalent or greater yield. Placing three nukes on one missile also could allow the United States to knock out more of North Korea’s limited nuclear arsenal with one preemptive attack.

The Hwasong-16’s huge TEL truck also lacks off-road mobility, making it easier to locate and destroy. Furthermore, because transporting a fuel-laden missile of that size would be impractical and dangerous, the missile would need to be pumped full of volatile rocket fuel supplied by multiple trucks at the launch site for hours prior to launch, creating a conspicuous target for preemptive attack. Indeed Michael Elleman writes for 38North that the TEL may simply be used to scoot the missile around an underground launch facility.

One alternative several experts have raised is that the Hwasong-16 could be a modern take on the Soviet Union’s Fractional Orbital Bombardment System (FOBS), designed to circumvent an earlier generation of U.S. defenses. The FOBS was launched into space to assume a partial (or “fractional”)  Earth orbit, swinging the weapon around the South Pole to attack the United States via its unguarded underbelly. Once over a target, a rocket motor would send the nuke plunging down.

The “fractional” aspect of the orbit ostensibly prevented the weapons from violating the letter, if not the spirit, of the 1967 Outer Space Treaty banning orbital nuclear weapons.

Hypothetically, an orbiting nuke could overfly virtually anywhere, circumventing fuel limitations and air defense radars to attack from angles difficult for the GMD system to intercept.

With the ability to attack in FOBS mode, North Korea could compel the United States to an unhappy choice: either build what amounts to a substantially new, south-facing defensive architecture, or accept that it cannot physically prevent nuclear attack from Pyongyang, even under the sunniest of assumptions about GMD’s performance.

Pollack argues a FOBS using just one nuke might actually be technically and economically more viable for North Korea than deploying MRVs, and would also give Pyongyang a useful platform for testing reentry vehicles over its own airspace.

Whatever the case may be, the lack of apparent testing and absence of photographic evidence of North Korean reentry vehicles means we still can’t be certain just what role Pyongyang’s monster missile plays in its nuclear deterrence strategy.

Sébastien Roblin writes on the technical, historical, and political aspects of international security and conflict for publications including  The National Interest, NBC News, Forbes.com , and War is Boring.  He holds a Master’s degree from Georgetown University and served with the Peace Corps in China.  You can follow his articles on Twitter.