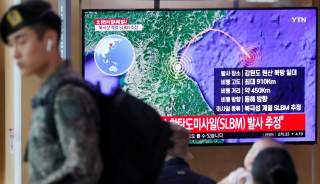 North Korea tested at least one medium-range ballistic missile on Oct. 2, 2019. The test came just hours after Pyongyang announced it would resume talks with the United States on the subject of the hermit state’s nuclear-weapons program.

North Korean leader Kim Jong Un and U.S. president Donald Trump last met in June 2019 at the demilitarized zone separating North and South Korea. Prior to that, Kim and Trump met in Hanoi in February 2019 and Singapore in June 2018.

None of the talks have resulted in any meaningful slowing of North Korea’s efforts to build up and improve its atomic arsenal. Pyongyang apparently possesses an arsenal of several dozen nuclear warheads plus a variety of short-, medium- and long-range ballistic missiles that are capable of delivering them.

North Korea also is developing a ballistic-missile submarine and a submarine-launched missile to go with it, potentially adding a survivable at-sea nuclear capability to reinforce its more-vulnerable land-based arsenal.

Kim in 2018 agreed to halt some missile-testing as a gesture of goodwill, but testing of sea-based missiles and shorter-range land-based missiles has continued. The Oct. 1, 2019 launch, according to Diplomat Senior Editor Ankit Panda “unambiguously [is] the first test of a missile designed to deliver a strategic nuclear payload since the Nov. 28, 2017 test of the Hwasong-15,” an intercontinental-range, land-based missile.

But according to David Wright, a physicist with the Union of Concerned Scientists in Massachusetts, U.S. officials later clarified that the test likely involved just one weapon -- and it probably launched from land.

Still, the missile might be designed to launch from a submarine, even if its initial testing takes place from land. A U.S. official told CBS News that the recent test involved a mid-range, submarine-launched ballistic missile.

The missile in the Oct. 2, 2019 test blasted off from a launch site near North Korea's eastern coastal town of Wonsan and flew around 280 miles at a maximum altitude of around 570 miles, South Korea’s joint chiefs of staff said in a statement, according to CBS News.

Wright analyzed the launch and calculated that the same rocket, if fired on a flatter trajectory, could travel as far as 1,200 miles.

Kim Dong-yub, an analyst from Seoul's Institute for Far Eastern Studies and a former military official, told Business Insider that Pyongyang’s launch was meant to increase pressure on Washington ahead of planned talks where Kim’s regime might demand relief from international economic sanctions.

According to The Washington Post, North Korean ambassador Kim Song told the U.N. General Assembly that it was up to the United States whether negotiations “will become a window of opportunity or an occasion that will hasten the crisis.”

“The situation on the Korean peninsula has not come out of the vicious cycle of increased tension, which is entirely attributable to the political and military provocations perpetrated by the U.S.,” the ambassador said.

According to CBS News, a U.S. State Department spokesperson called on North Korea "to refrain from provocations, abide by their obligations under U.N. Security Council resolutions and remain engaged in substantive and sustained negotiations to do their part to ensure peace and stability on the Korean peninsula and achieve denuclearization."